Their families back home are conducting civil disobedience

At least 1,500 people are known to have been killed in over a year of resisting the military coup in Myanmar. Several hundreds of houses have been burnt and some 11,000 people have been unlawfully detained according to reports.

Huge numbers of young men, and a few women across Myanmar have been leaving their homes and families behind, gathering in the jungles, training themselves to use weapons and planning the fight against the junta to get their country back.

Many of them have lived under military rule before, and know what it does to their lives. Children as young as seven have joined these armed local groups, which are now becoming far better organised and equipped.

*Thunder, a 35-year-old from Chin state was an MLA candidate in the November 2020 election just before the coup. He lost the election, and was back at his job running a travel agency when citizens started protesting against the junta.

“I told my wife, though I didn’t win, a lot of people voted for me. So I need to do something. I then joined the defence group in Kali township. I was gathering people and protesting. I belong to the Phalam tribe. Historically, we have been quite backward politically and my focus was on encouraging them to stand up for their rights,” he tells The Citizen.

Many of the election candidates were afraid to stand up against the military as they were public figures and could easily be identified. But Thunder says the people soon started questioning them, and he decided that if the people were looking for leaders he would stand up, even at risk to his life.

“Our initial intention was not to form an arms body, it was just to protest freely. But then I was convinced we need a proper arms body. When we say arms, it is not necessarily guns, we use whatever we have in hand, even if it’s just stones.

“In Chin state we have a population of around 4 lakh and more than 40 languages. So forming a common organisation for the whole country is out of question.”

“Almost every tribe has their own fight for freedom - but - now they are all united against the military. Once we defeat the military and get our country back, we will fight for a more federal nation.”

“Our problems are political, but we need an arms body because there’s no other way to get what we want here. I was appointed as the Army Chief although I’ve never been trained in it.

“There are about 800 people in the CNDF. We call them as commandos, those who leave their homes and stay in the jungles. We also have commando reserves, people who are trained and serve when required. In Chin state alone there are about 16 groups like us.”

“We live in the jungles because we use dangerous weapons. We are not civilians anymore so it’s not safe to stay in the village. We initially sent some people to be trained from an already established arms organisation, and when they were back they started training the others. That is the basic military training which takes about three weeks. Just to take the gun, clean, load and shoot. Then we have an upgrade training,” he explains.

He says it’s about more than getting rid of the junta.

“Our mission is to get a federal democracy. But we cannot talk about it when we are under the military rule. For the Burmese, it’s just freedom from the military, but for us, that is just the first step. The military will not allow us to talk about anything or negotiate, so we have to take up arms. The military are in our lands. So our first goal is to get a liberated area, get the land back.”

Describing previous encounters with the junta, he says, “Sometimes they burn the villages, they randomly catch people and shoot them if they know that they are helping us or welcoming us. They kill the innocent people to threaten us, so sometimes the villagers ask us not to come. Last year, they burnt over 600 houses in Phalam state.”

Ko Tyaza, 37, is from the neighbouring Sagaing region and is chief trainer of his local defence force of about 500 people. He says the main challenges for his group are access to guns and mines, ration and shelter. When they try to take refuge in civilian land, the junta threatens and harms innocent civilians. He adds that they make their own weapons, and have taught themselves to make bombs, but many a time they have accidentally been injured by their own bombs.

23 year old Shwe Htang from Mindat, Chin was just a college student when he joined the local defence force and eventually became their leader.

“Most of the boys in my state have left their homes. They live in the jungles now. In Mindat, we recorded about 7 buildings including a hospital that were burnt down. While we tried to defend our village, my house was destroyed too. I was attacked and injured. My friends on the other hand were injured after they accidentally detonated the bomb we made.

“We tried to get one of my friends who was seriously injured to the Indian side of the border so we could treat him in a good hospital. We travelled for close to two weeks by motorcycle and we managed to reach India on February 11 and eventually landed up in Delhi. I am doing some odd jobs now, and I hope to continue my studies here.”

Many of their families back home have meanwhile joined the Civil Disobedience Movement, rejecting anything that is controlled by the junta.

According to Win Neiang, a university student, “We stopped going to college ever since the coup. We will not accept their education. The teachers and staff have resigned too. The civil disobedience movement started with the healthcare sector: nurses and doctors refused to work under the military rule, but they continue to help civilians by setting up small clinics in the villages and towns.

“My brother in law is an immigration officer. He resigned too. People from almost all departments and sectors have resigned. We have to do everything possible to bring the junta down.” 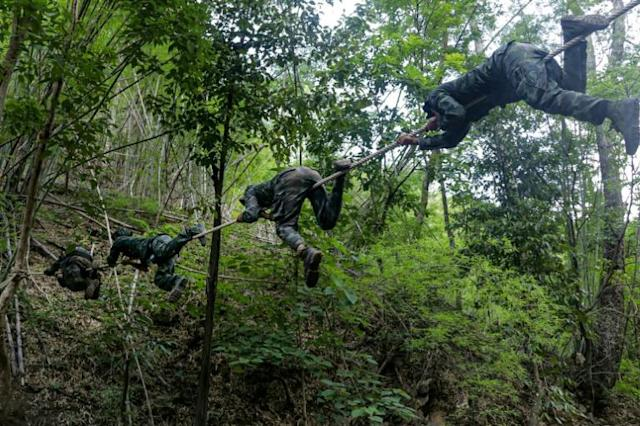