Indigenous people must have first rights on the forest

An annual report of the United Nations Environment Program and GRID-Arendal, a Norwegian non-profit, released last month finds the incidence of wildfires around the world is increasing rapidly due to global warming caused by deforestation and increasing emissions of greenhouse gases.

It warns that the number of global wildfires could increase by 14 percent by 2030, 30 percent by 2050 and 50 percent by the end of the century. If emissions continue to increase at the current rate, the Arctic and other cold regions that have not yet been affected could be facing wildfires by 2100. Wildfires are also likely to increase in Indonesia and the southern Amazon.

Uncontrollable and extreme wildfires can be devastating to people, biodiversity and ecosystems. The report also finds that climate change and land-use changes are making wildfires worse, and anticipates a global increase in extreme wildfires linked to human activity. Wildfires lead to further climate change, as they contribute significant amounts of greenhouse gases to the atmosphere.

Climate change is caused by the Earth’s rising average temperature due to human activity. Over the last century, the average global temperature has risen by 1.1 degrees celsius above the pre-industrial revolution average primarily due to land-use change and spiking emissions of greenhouse gases.

A slight rise in temperature also multiplies the incidence of natural disasters, such as droughts and wildfires. Last June the town of Lytton in the Canadian province of British Columbia was devastated by wildfires after a heat wave. A similar incident took place in Galatsona village on Evia island in Greece. An increase in the average temperature also causes a decrease in the relative humidity in the air, which leads to drought conditions which in turn increases the incidence of wildfires.

Wildfires are becoming more intense and frequent, ravaging communities and ecosystems that come in their path. The past five years have seen record-breaking wildfires across the world from Australia to the Arctic to North and South America, China, and the European subcontinent. Wildfires wreaked havoc in Greece and Portugal in 2017 and 2018, and continue to rage in California since 2019, with an area of 7.1 million acres affected by wildfire in 2021.

According to the United States National Interagency Fire Center, eight of the ten largest and costliest wildfires in California have occurred in the last five years. The main cause of wildfires in California is rising temperatures and changes in land use. Temperatures in the western United States have risen by 1.5 to 2.0 degrees Fahrenheit since the beginning of the 20th century. With the rise in temperatures, the average duration of wildfires has been increasing by 3 days every year since 1970.

The increase in wildfires in the area is also due to the abundance of eucalyptus trees. Eucalyptus is not a local tree of California; it was planted in California in 1850 to meet the shortage of timber and fuel. It contains a lot of oil. Here the water shortages and rising temperatures can quickly cause fires to burn on dry leaves and eucalyptus wood, leading to severe wildfires.

In 2019-2020, wildfires engulfed Australia, killing millions of wild animals and 33 human beings. Nearly 500 further deaths could be attributed to the health effects of inhaling wildfire smoke. The wildfires have been raging for several months in summer, that is why the 2019-2020 summer is known as the Black Summer in Australia.

In 2020, the Pantanal wetland, the world’s largest tropical wetland, caught fire due to drought and high temperatures. Pantanal lost nearly a third of its biodiversity and many endangered species along with it. This wetland is spread across three South American countries: Brazil, Paraguay and Bolivia.

In 2020, an average temperature rise of 4 to 6 degrees Celsius in the northern part of Siberia, a region known as the coldest part of the Russian Federation, caused a forest fire that burned alive millions of wild animals and millions of hectares of forest trees. Forest fires increase emissions of carbon dioxide and other greenhouse gasses into the atmosphere. These gases enter the atmosphere and raise the temperature, which causes heat waves and droughts. Such incidents lead to a dramatic increase in wildfires and this phenomenon repeats again and again in a vicious cycle.

Due to human activities, there is a continuous rise in the average temperature of the earth. In the name of economic development, large scale deforestation is conducted for roads, bridges, residential construction, mining and commercial farming. In this way most countries of the world have wasted a lot of natural resources in a blind race for the economic development of a few.

A special report of the IPCC titled ‘Climate Change and Land’ released in 2019 revealed that human activities have changed 70 percent of the Earth’s ice-free land area. Natural vegetation has been replaced by concrete surfaces, which emit large amounts of temperature-increasing gases instead of absorbing them.

On one hand we have a rapid increase in human population, with a few wealthy people consuming most of the resources, while on the other hand the area under forests is declining rapidly. Man is planting commercial crops in place of natural vegetation for his own economic interests, for which he is destroying forests.

Since taking office in 2019, Brazilian President Jair Bolsonaro has undermined the legal protections of the Amazon rainforest and the rights of the Indigenous tribes living in those forests. In the name of economic development of Brazil, dense forests are being set on fire and replaced by crops like soybean and palm. Livestock pastures and habitats are also being set up for exporting meat to other countries. Increasing numbers of livestock and indiscriminate cutting and burning of forest for the cultivation of commercial crops are also responsible for growing wildfires.

The replacement of native (local) by ornamental and commercial vegetation is also responsible for the increasing incidence of wildfires. In the Himalayan states of Himachal Pradesh and Uttarakhand in the 19th century, the British government made extensive use of local trees such as oak, sal, and cedar, and to supplement them planted a large number of eucalyptus trees in the region which are commercially and economically viable, but the wood of these trees is more flammable which is leading to increase in wildfires in the area.

Wildfires are also deadly to human health. Besides respiratory illness, they can also cause allergies in the eyes and on skin. According to a research study published in the Lancet Journal, at least 30,000 people die each year in 43 countries from the effects of wildfires. A report by the European Union’s Copernicus Atmosphere Monitoring Service also finds that wildfires emitted 2.5 billion tons of carbon dioxide in the two months of July and August in 2021.

Although it is not possible to eliminate wildfires, much can be done to reduce them. The United Nations Environment Program has called on the governments of various countries to come up with alternative and effective plans to control wildfires. So far the governments of various countries have spent only on mitigation efforts such as firefighting vehicles and personnel.

To prevent wildfires, the first step is to reduce greenhouse gas emissions rapidly in order to control the rise in temperature. To control the incidence of wildfires, the local vegetation needs to be taken care of. Instead of commercially viable and attractive looking trees, each country will have to re-adopt local vegetation. In addition, big companies and banks that are deforesting on a large scale in the name of “sustainable development” should be banned.

In order to control wildfires, people who live in forests must be given the first right to use forest produce. At the same time, immediate help should be sought from them to put out wildfires. New fire prevention structures should be set up in the affected areas. A Fire and Disaster Management Force should also be set up for other disasters like floods and droughts. Funding and expansion of scientific research is also essential for the prevention of wildfires.

Countries need to proactively involve locals, both people and companies, to plant trees and increase forest cover. They also need to protect the lives and rights of the Indigenous people living in forests and learn from their traditional techniques of dealing with forest fires, so they should be actively involved in the community to counter this looming threat.

Finally, deforestation needs to be counteracted with reforestation, as we cannot survive with our shrinking green cover. We need to act now, because looking at the increasing frequency and intensity of wildfires, human life is in immediate danger. Any delay would be too late. 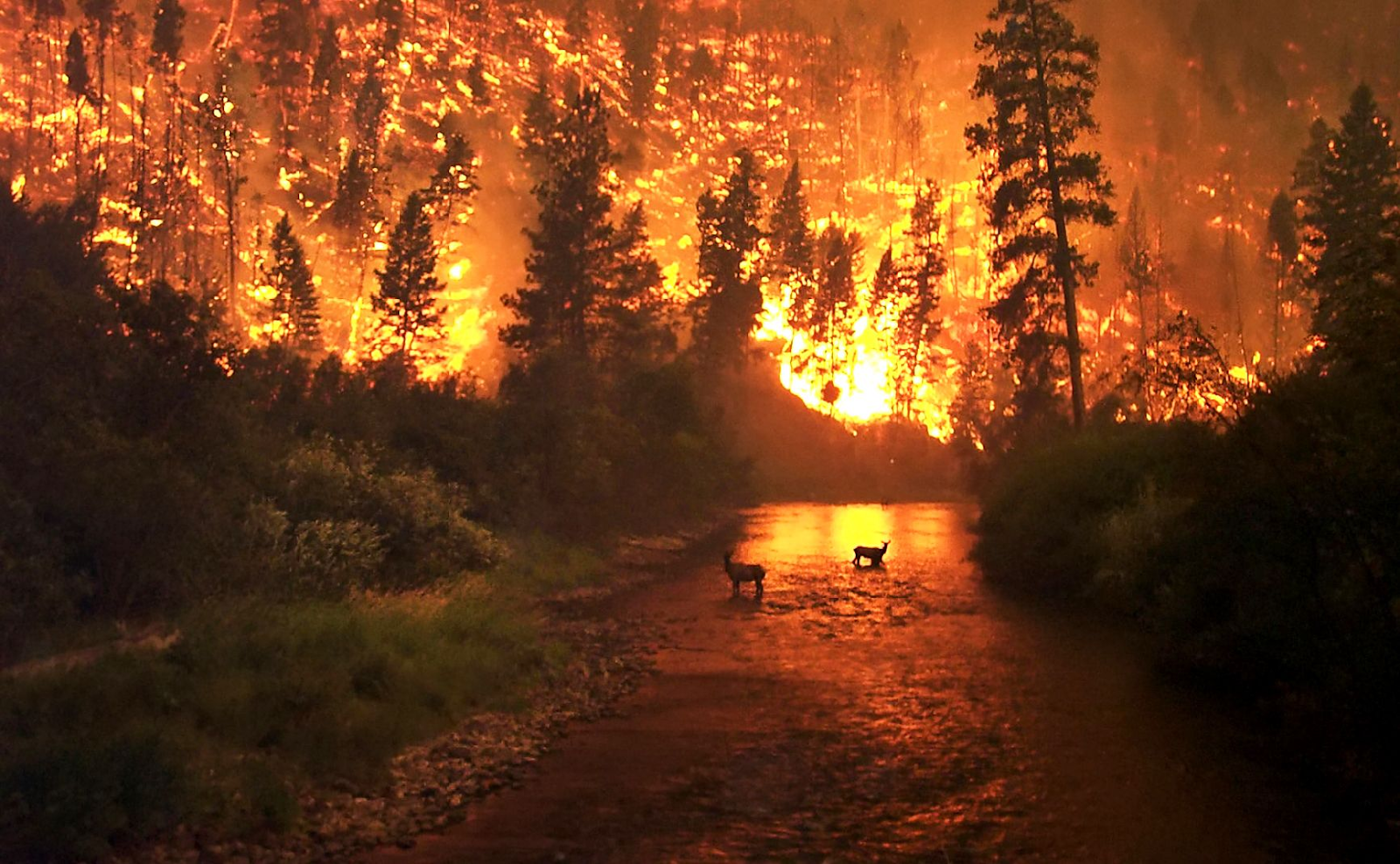