Rajapaksa Clamps Down on Crisis

The President’s Media Division said the gazette was issued “considering the prevailing situation in the country and in the interests of public security, the protection of public order and the maintenance of supplies and services essential to the life of the community.”

According to the Colombo-based think tank the Centre for Policy Alternatives, Section 2 of the Public Security Ordinance empowers the president to declare a state of emergency in two situations: in the interest of public security and the preservation of public order, or for the maintenance of supplies and services essential to the life of the community.

It notes that regardless of the reason for declaring a state of emergency, once such a declaration is made it gives the president wide powers with only limited checks and balances. The president can promulgate emergency regulations dealing with any subject at any given time.

Meanwhile the chairperson of the Human Rights Commission of Sri Lanka, retired Supreme Court Justice Rohini Marasinghe said on April 1 that those arrested over Thursday’s protest outside Rajapaksa’s private residence at Mirihana could not be charged under the Prevention of Terrorism Act.

The Commission’s acting director of research and monitoring Nihal Chandrasiri quoted Marasinghe as having told the Commission’s staff that those arrested should be charged under the Public Property Act No.12 of 1982 and not the PTA.

Chandrasiri told The Island that the Commission would be visiting the detainees on Friday and Saturday. Its position would be made known to law enforcement authorities, he added.

Rajapaksa imposed the public emergency following unusually violent protests in front of his private residence outside Colombo on Thursday night, where protestors burnt a bus, unusual in Sri Lanka where protests are normally non-violent. Several people including policemen were injured. Police have arrested 54 persons.

Spokesman and deputy inspector-general of police Ajith Rohana said that the protest which commenced on Thursday evening was peaceful for over four hours, but some elements in the crowd later turned violent causing damage to vehicles and property. He said five policemen were injured in the incident.

He said that investigations were being carried out with the support of the Police Scene of Crime Officers and the Police Criminal Records Division through all available evidence including CCTV footage in the area.

“Through these investigations it is expected to reveal if there is an involvement by outsiders to provoke the protesters who were behaving peacefully for about four hours since the evening,” he said.

While the government is blaming “extremists” for the violence, it has yet to identify the extremists.

Sri Lanka’s mainstream opposition political parties have called upon their cadres not to indulge in violence. The United National Party (UNP) and the Janatha Vimukthi Peramuna (JVP) have said that they will not be joining any protests organized by “anonymous” groups.

On March 31, JVP general secretary Tylvin Silva had warned party supporters to beware of protests that have no responsible organizer. He said the JVP would never try to seek petty political mileage out of such efforts.

Speaking at a media briefing held at the party’s Sirikotha party headquarters on March 31, UNP deputy leader Akila Viraj Kariyawasam stated that it would not take part in any protests organized by anonymous groups. Emphasizing that the UNP, as a responsible political party, would not support efforts to “provoke the people,” he said it was committed to continuing its satyagraha campaign across the country.

UNP leader and former prime minister Ranil Wickremesinghe said earlier on April 1 that “The Government has failed to solve the problems that are plaguing the citizens of Sri Lanka. The Opposition has also failed to uphold its responsibility.”

Wickremesinghe said the demonstration had erupted at Mirihana as no solution was provided for the problems faced by the people. “This incident can be described as a result of the collapse of the current political structure,” he said in a statement.

He added that the government must reveal who was behind the violence.

“The Government is blaming various groups for the incident, but they must present evidence to support these claims. It must also reveal who is behind the violence, while refraining from making any racist comments. This was not a racist incident. This was not a terrorist incident. Such comments would only exacerbate the already volatile situation. The protests that took place at Jubilee Post were peaceful, however, at Pangiriwatta that situation changed,” Wickremesinghe said.

While some reports suggested that a minority community had instigated the violence, Wickremesinghe differed.

“I express different views on this. We must remember one thing. No one should be harmed in a peaceful protest. Violence must not be tolerated. But people have the right to protest freely and peacefully. Political parties should not take part in these citizen led protests. But, political parties have the right to hold their own meetings and protests.”

Meanwhile, the shortage of food and diesel continues in Sri Lanka. Thirteen-hour power cuts on a daily basis are tormenting the people. The diesel shortage has hampered trade and transport, and hospitals have reportedly been forced to delay surgeries due to a shortage of essential medicines.

India and China have announced loans to the Sri Lankan government amounting to almost USD 5 billion. But the people see no difference in their lives. The forex shortage continues to hamper essential imports. 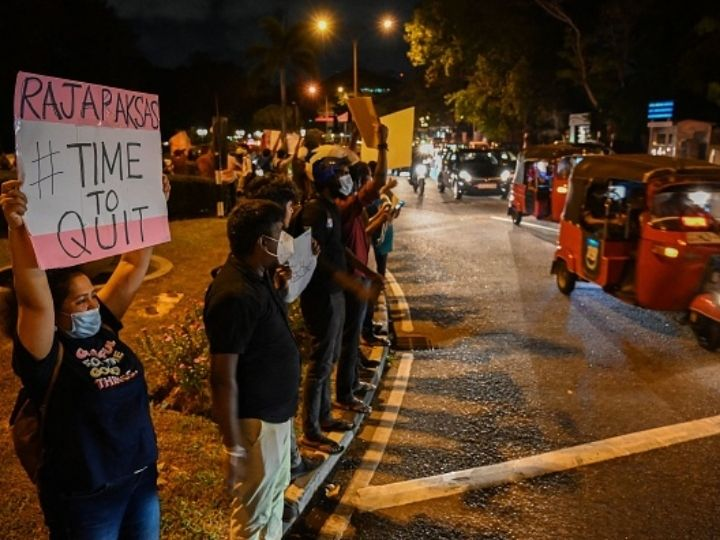