Appeals to MPs to prioritise food crisis and not politics

The Speaker of the Sri Lankan parliament, Mahinda Yapa Abeywardena, on Wednesday made a fervent appeal to MPs to stop giving priority to their political demands (chiefly the ouster of President Gotabaya Rajapaksa) and put their heads together to find a way to end the severe economic crisis the island nation is undergoing.

“Economists have warned that there may be a severe food shortage apart from fuel, gas and electricity shortages,” he pointed out and added that what the country does now to control the situation, to some extent at least, depends on how MPs act this week.

He appealed to all MPs to make good use of the opportunity to debate the current crisis and together find solutions for issues rather than find fault or blame each other.

The Speaker noted that the people are agitating due to their frustration “which is reasonable”. But MPs must understand the frustrations of the people and act sensibly he said, and urged all members of parliament both in the government and opposition to come together to resolve these issues within a democratic framework.

“If we fail at that task, it is parliamentary democracy which fails. The result could eventually cost the lives of thousands of innocent people including all of us. I have experienced two such dark ages during my life. Hence, we must take every effort in order to avert such a situation and find solutions in order to make this country a better place for all of us and our children,” the Speaker said.

Sure enough, as the Speaker was making his statement, doctors of government hospitals were demonstrating in Colombo demanding essential medicines. They blamed the government for the current shortage of drugs.

However, the Lankan economic crisis marked by all-round shortages, has now taken a marked political hue with the accent on getting President Gotabaya Rajapaksa to resign. But Gotabaya has conveyed to parliament that he will not quit. Throwing the ball into the court of the opposition, the President has said that he will appoint anyone as Prime Minister if he or she can prove the backing of 113 MPs (in a House of 225 including the Speaker).

But the question is: Is the opposition interested in doing that? Can it unite, given the deep divisions in it? Aware of this, the Chief Government Whip Johnson Fernando told the House on Wednesday that President Gotabaya Rajapaksa would on no account step down.

“As a responsible Government, we state President Gotabaya Rajapaksa will not resign from his post under any circumstances,” Fernando said and added that 6.9 million citizens of the country had voted the President into office. This touched off an agitation by the opposition Samagi Jana Balawegaya (SJB) within the parliament complex. MPs held placards and chanted “Go Home Gota.”

However, there is concern both in the government and in civil society about the use of violence by the protestors in several parts of the island. State Minister Kanchana Wijesekera claimed that certain groups are attempting to damage property and endanger the lives of government MPs in the guise of protesting against the shortages. The private residences of Ministers and ruling party MPs are being targeted. There is a growing fear that social miscreants and extremist outfits like the Janatha Vimukthi Peramuna (JVP) have jumped into fray.

Minister Wijesekara requested the Speaker to direct the Inspector General of Police to issue strict orders to the Security Forces to ensure the safety of MPs. “ I urge you as the Speaker and especially the IG to investigate who is behind the attacks on the residences of the MPs, who is telling them to go to these specific houses and providing them the stones.” Wijesekara said.

Minister Wijesekara challenged the Opposition to prove its majority democratically. “If you can show your majority, by rallying 113 MPs (out of 225 members including the Speaker) we will not remain in power a minute further,” he said.

The ruling party now has only 114 MPs after 42 defections on Tuesday, just one more than the required number to be in power (113). But the opposition is divided.

Meanwhile, the Bar Association of Sri Lanka (BASL), while defending the right of those protesting peacefully, called upon authorities to take necessary action against any protesters inciting violence. Sri Lanka’s Defense Ministry is monitoring the wave of protests. While the Ministry recognizes the people’s democratic right to peaceful protest, action will be taken against anyone unleashing violence said Defense Secretary Gen Kamal Gunaratne in a video statement on Tuesday.

According to him, two district groups have been found to be organizing the ongoing protests. The first category is made up of peaceful protestors exercising their democratic right, while the second consists people intent on damaging public and private property with ulterior motives.

Amidst the unrest, the report prepared by the International Monetary Fund (IMF) on Sri Lanka was presented in Parliament by the Speaker on Tuesday.

The report said that Sri Lanka faces “solvency” issues because of risks stemming from unsustainable debt levels that jeopardize the nation’s economy, according to International Monetary Fund staff.

The report said: “Based on staff analysis, the fiscal consolidation necessary to bring debt down to safe levels would require excessive adjustment over the coming years, pointing to a clear solvency problem.”

Sri Lanka faces unsustainable debt levels that need a “credible and coherent” strategy to restore stability. The country’s “debt overhang,” along with persistent fiscal and balance-of-payments shortfalls, “will constrain growth and jeopardize macroeconomic stability in both the near and medium term,” the report said.

“Rollover risk is very high,” the IMF said. “FX debt service needs of US$ 7 billion each year will require access to very large amounts of external financing at concessional rates and long maturities, sustained over many years,” it added.

Negotiations on a possible aid package are expected to start in April, when the Lankan Finance Minister travels to Washington. Sri Lanka has about US$ 2 billion of reserves against US$ 3.9 billion of foreign-currency debt due for the remainder of 2022, according to Bloomberg calculations based on Central Bank data. This includes US$ 1 billion of sovereign bonds maturing in July.

Sri Lanka has no Finance Minister now with both Basil Rajapaksa and his successor Ali Sabry quitting. There is no Finance Secretary either after S.R.Attygalle quit. All these are fallouts of the politico-economic crisis.

But President Gotabaya Rajapaksa has appointed a team of eminent economic and fiscal experts as Members of the “Presidential Advisory Group on Multilateral Engagement and Debt Sustainability.”

This committee will help Sri Lanka negotiate with the IMF and the World Bank in Washington this month. It will discuss with relevant Sri Lankan institutions and officials engaging with the IMF and provide guidance that will address the present debt crisis towards a sustainable and inclusive recovery. 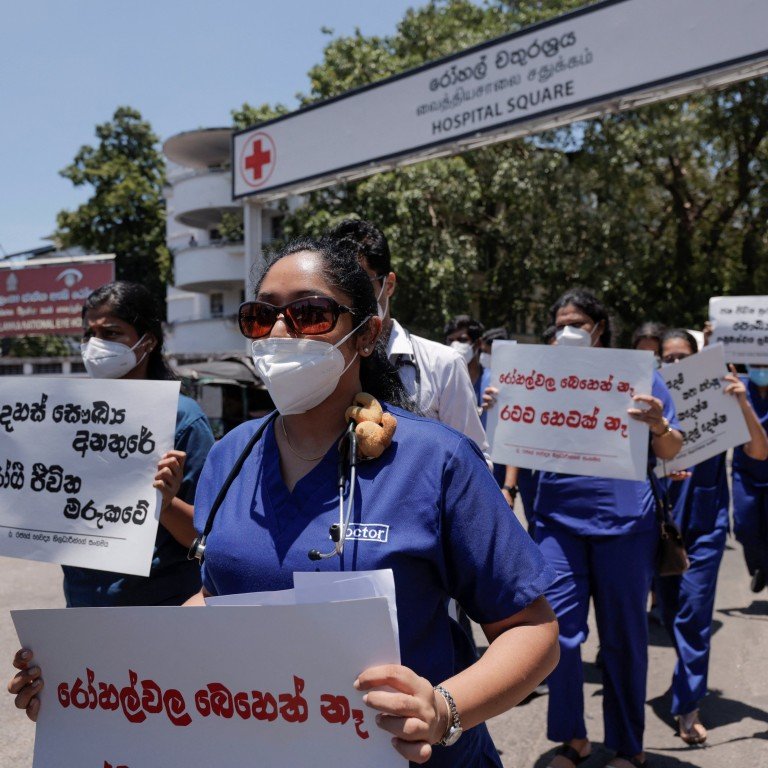