A direct challenge to India

China has warned Sri Lanka about the consequences of taking the IMF road to solving its forex and other pressing economic problems. Beijing has expressed fears that it will be marginalized in Sri Lanka if the island nation accepts some of the anticipated conditions of the IMF. And it has unmistakably hinted that acceptance of some of the IMF’s conditions will adversely affect Sino-Lankan relations.

The Chinese Ambassador in Sri Lanka Qi Zhenhong told select media persons here on Monday, that China is keenly studying the Lanka-IMF negotiations and said that the scheme evolved as a result of the talks will determine the future of Sino-Lankan economic relations.

Qi was hinting that in case the IMF prescribes that Sri Lanka should scale down or be extremely wary about taking loans from China, and Sri Lanka abides by such advice, Sino-Lankan economic and political relations will suffer.

China’s fear about the IM-Lanka talks stems from the fact that the IMF’s mission chief in Sri Lanka, Masahiro Nozaki, had told Reuters in an email interview earlier that the IMF is expecting Sri Lanka to restructure its foreign debt including that owed to China. The singling out of China is seen as being significant because it stems from the Western belief that China has put Sri Lanka in a ‘debt trap’ (even though China accounts for only 10.5% of the Sri Lankan external debt of US$ 51 billion).

China is looking with trepidation, the massive Indian effort to help Sri Lanka materially and financially. To China, India’s help to get Sri Lanka IMF assistance seems to be part of a Indo-Western scheme to influence economic decision making in Sri Lanka to suit their geo-political interests, which, as is well known, clash with China’s.

India has not only been the first to announce emergency loans totaling US$ 2.5 billion to Sri Lanka, but it has also fast–tracked delivery of assistance in terms of food, fuel and medicines. Going out of the way, India’s Finance Minister Nirmala Sitharaman has urged IMF to treat Sri Lanka as a low income country for the time being so as to extend urgent aid. Sri Lanka needs US$ 3 to 4 billion from the IMF and other quarters urgently.

Given the possibility of concessional IMF assistance coming through, China fears that Sri Lanka might opt for the Indo-Western camp and start looking at economic cooperation with China with less and less favor.

Be that as it may, China may have brought this upon itself. When the Sri Lankan President Gotabaya Rajapaksa requested the visiting Chinese Foreign Minister Wang Yi to reschedule Chinese debt repayment, Wang did not oblige, saying that China has no system of rescheduling loan repayments. He went on to advise Sri Lanka to borrow prudently. Ambassador Qi told newsmen on Monday that China and Sri Lanka are discussing re-scheduling of loans, but added that it is important for Sri Lanka to strive for ‘self-sustainability’.

When the economic crisis in Sri Lanka worsened and India had rescheduled repayment, China offered a loan of US$ 1 billion to repay old loans to it and US$ 1.5 billion buyer’s credit to buy goods from China. But the promised money is yet to come. Perhaps, as Ambassador Qi said, Chinese assistance will depend on the outcome of Lanka’s talks with the IMF.

Ambassador Qi voiced complaints against Sri Lanka’s attitude to China. He told a delegation of 11 parties which had defected from the government that Sri Lankans do not show gratefulness to China for its help. He told local journalists that Sri Lanka owed US$ 390 million to Petro China. Out of the 19 shipments sent by that company, only 7 have received payment.

To tackle Indian influence in Sri Lanka, China has made forays into the Northern part of the island populated by Tamils who share close ties with Tamil Nadu in India.

Ambassador Qi inaugurated a sea cucumber export project and has also distributed food packets to needy fishermen there. He would be visiting the Eastern province and is likely to explore possibilities of bringing Chinese investments to this part of Sri Lanka where two thirds of the people are Tamil-speaking.

This is a direct challenge to India which sees the Tamils as its natural constituency. 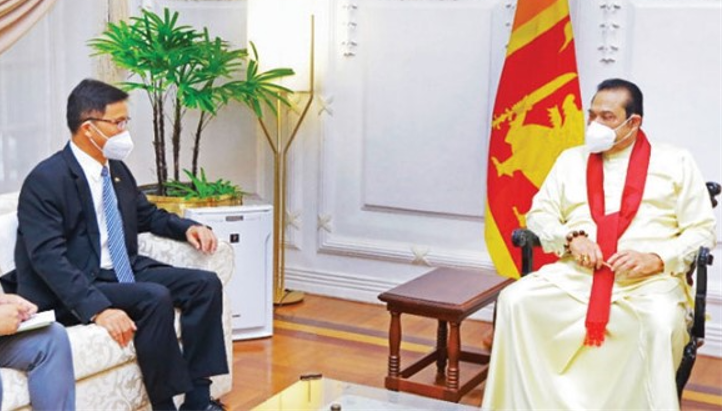