Second visit by Assad to Iran in 11 years

The unannounced arrival of the Syrian President Bashar al-Assad to Tehran on Sunday makes yet another wrinkle to the geopolitics of West Asia. In a short trip of a few hours, Assad had meetings with Iran’s Supreme Leader Ali Khamenei and President Ebrahim Raeisi and returned to Damascus.

This is only the second trip by Assad to Iran in the past 11 years since the conflict erupted in Syria. The last occasion was in 2019, when he came accompanied by the charismatic commander of the IRGC’s elite Quds Force late Qassem Soleimani to mark Syria’s “victory” in the conflict. Much water has flowed down the Euphrates and the Tigris since then.

There is some speculation that Russia may redeploy its forces in Syria. The Israeli intelligence website DebkaFile reported cryptically on Friday that “Russian units deployed to Syria are assembling at the air bases of Hmeimim, Qamishli, Deir e-Zor and T4, ready for some to transfer to the Ukraine war front. DEBKAfile’s military sources report that the Russians are handing over key bases to Iran’s Revolutionary Guards and Hezbollah.”

Prima facie, this is kite-flying, so to speak. There is no independent word from Moscow. Iran will certainly be in the loop on any big Russian troop withdrawal from Syria. The Turkish air space has been closed to Russian planes since April and on February 28 Ankara had restricted the passage of Russian warships through the Bosporus and Dardanelles Straits (unless they are returning to their bases in the Black Sea.)

Analysts have interpreted the Turkish decisions as “anti-Russian” but they come under the ambit of Montreux Convention (1936) and on closer look, may even work to Moscow’s advantage since the door is also closed to any NATO naval build-up in the Black Sea. Russian papers have pointed out that Moscow has been using the air corridor via Iran and Iraq to supply its troops in Syria.

Indeed, Turkey is doing a delicate trapeze act vis-a-vis Russia and Ukraine, being a Black Sea power with overlapping security concerns, while also a NATO power. Turkey has deftly created space to maneuver since NATO is technically not at war with Russia, and since Turkey is not a EU member country, it isn’t obliged to sanction Russia, either.

Turkish leadership has actively nurtured contacts with the Kremlin, and the economic partnership continues, including over the construction of the massive $20 billion Akkuyu Nuclear Power Plant (comprising four 1,200 MW VVER units), which is expected to meet ten percent of Turkey’s electricity demand when it is completed in 2025.

Again, Russian carrier Aeroflot has just resumed flights to Turkey in anticipation of the tourist season. Believe it or not, Turkey has found an ingenious formula to allow Russian tourists to travel to Turkey bypassing the suspension of Visa and Mastercard by making it possible to access their funds through Russia’s homegrown payments system called Mir! Some 4.7 million Russian tourists visited Turkey last year, accounting for 19% of the total tourist arrivals, fetching an annual income exceeding $10 billion.

When it comes to Russian-Iranian relations too, the picture is broadly similar to India’s — neither supporting Russia nor opposing it while refusing to censure Russian intervention and counselling ceasefire and dialogue as the only solution.

According to Iranian media reports, Russia’s Deputy Prime Minister Alexander Novak is due to visit Iran shortly in connection with the session of the Iran-Russia Joint Economic Committee. The discussions are expected to focus on “strengthening financial cooperation and resolving transit problems” between the two countries as well as cooperating in the fields of oil and gas and promoting trade and tourism. Tehran knows that such camaraderie with Moscow is contrary to the spirit of Western sanctions.

Moscow has every intention to remain actively involved in Syria. Special Russian Presidential Representative for the Middle East and Deputy Foreign Minister Mikhail Bogdanov disclosed to Tass last week that Russia is working on scheduling the next international meeting on Syria in the Astana format for the end of May in Nur-Sultan, Kazakhstan. Does that look like Russia washing its hands off Syria? To quote Bogdanov, “We already discussed this with partners Iran and Turkey as the guarantors of the Astana process plus with the Syrian government and opposition delegations.”

The official Syrian news agency Sana described Assad’s trip to Tehran as a “working visit.” It quoted Assad as stressing to Khamenei about “the importance of continuing cooperation in order not to allow America to rebuild the international terrorist system that it used to harm the countries of the world,” adding that the US “is weaker than ever.”

There are four main takeaways from Assad’s talks with the Iranian leadership. First, Assad made it clear in no uncertain terms that no matter Syria’s normalisation with the UAE (or other Arab countries involved in the conflict), he continues to attribute the highest importance to Syria’s alliance with Iran. Assad underscored that Syria is ready for broader coordination with Iran in security, political and economic fields.

Second, Damascus needs Tehran’s help for ending freeing Syria from foreign occupation. Raisi told Assad, “The whole of the Syrian land must be liberated from foreign occupiers. This occupation should not be subject to the passage of time, and the occupying forces and their mercenaries should be expelled.” Sana cited Khamenei as stressing that Iran will “continue to support Syria to complete its victory over terrorism and liberate the rest of the country’s lands.”

Third, the two countries have a consensus on the effectiveness and vibrancy of the resistance front. Assad acknowledged that the weakening of the US’ influence in West Asia and the end of Israel’s military supremacy regionally is a direct outcome of the strategic relations between Iran and Syria, “which must continue with strength.”

Interestingly, Khamenei recalled that Soleimani had “a special liking towards Syria and literally sacrificed his life” for that country and viewed the issue of Syria as a “sacred duty and obligation”. Khamenei reminded Assad poignantly, “This bond is vital for both countries and we should not let it weaken. On the contrary, we should strengthen it as much as possible.” Raisi called Assad “one of the figures of the Resistance Front” like his father Hafez al-Assad.

Fourth, Assad sought and obtained assurances from the highest level of Iranian leadership that Iran will help Syria overcome its difficulties. This is particularly crucial at a juncture when regional politics is in flux and Russia is preoccupied in Ukraine.

A resuscitation of the US-led regime change project in Syria is not to be expected and Washington no longer wields commanding influence over its Persian Gulf allies or Turkey to get them to act as its surrogates. But Assad’s challenge is that Syria is getting relegated to the back burner as new hotspots and topical issues draw the region’s attention — such as JCPOA, Yemen, Iran-Saudi normalisation, OPEC+, etc.

Although the conflict has ended, Syria still remains under foreign occupation and its economy is in ruins. A frozen conflict may legitimise the status quo. Meanwhile, Israel is waiting in the wings. Assad’s visit to Tehran signals that Iran remains the mainstay of Syria’s future strategy to avoid such a dismal fate. Iran’s Foreign Minister Hossein Amir Abdollahian affirmed on Monday that Assad’s visit was held in an atmosphere of “fraternity and friendship,” and it opens a new chapter in the strategic ties. 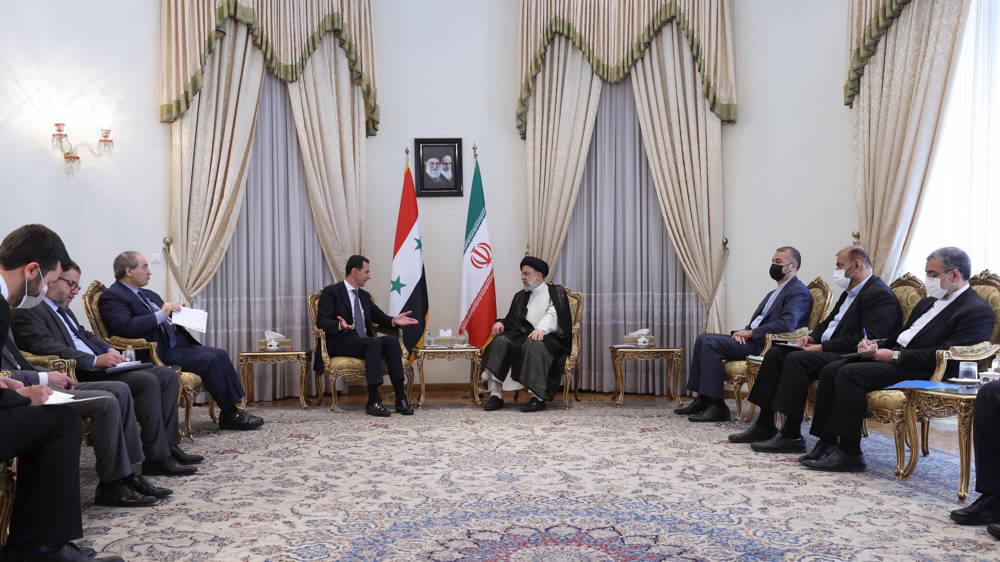