After violence rocked Sri Lanka on Monday, with many having a field day destroying and burning government and private property including the ancestral house of the Rajapaksas, trade unions declared a continuous strike to force President Gotabaya Rajapaksa to quit.

If the strike continues, the economy, already in the doldrums because of a severe forex shortage, will go down further, and the masses will suffer even more grievously than they do now.

The President’s elder brother and Prime Minister, Mahinda Rajapaksa, had quit on Monday following the violence his followers unleashed on peaceful anti-government protesters. The violence had elicited universal condemnation and the Prime Minister felt that he should resign.

The PM’s resignation and the violence unleashed on pro-government leaders in many parts of the island, have emboldened other anti-government elements to step up their campaign for the ouster of President Gotabaya Rajapaksa. The trade unions have become the vanguard of this new movement.

The Sri Lanka Administrative Service Association (SASA) decided to withdraw from duties from Tuesday until further notice. The association said it is launching the action to deplore the government’s role in inciting violence. The association also urged Speaker Mahinda Yapa Abeywardena to convene the parliament immediately to prevent the country from falling into a state of anarchy.

The Station Masters’ Union also launched a trade union action effective from midnight Monday. They are demanding action to bring stability to the country amidst the ongoing chaotic situation.

It is reported that all trade unions affiliated with the health sector have also resorted to a strike action in support of the anti-government movement. But the national convener of Trade Union Coordinating Centre (TUCC), Ravi Kumudesh, said that essential services in the health sector will function.

According to the convener of the Ceylon Electricity Board Joint Trade Union Alliance, Ranjan Jayalal, all trade unions in the electricity sector commenced a continuous strike. Trade unions of teachers and principals also resorted to a strike action, the chief secretary of the Ceylon Teachers’ Union, Joseph Stalin said.

In the island-wide violence on Monday, an opposition party MP, Kumara Welgama, was one of those attacked by anti-government mobs, clearly showing that mobs had no sense of discretion. Welgama is now in the ICU at the Homagama Base Hospital. The driver of the parliamentarian, had also been hospitalized.

The chairman of Imaduwa Pradeshiya Sabha, A.V. Sarath Kumara was reported dead following an attack on his residence on Monday night. He was admitted to the Imaduwa Hospital with injuries but was pronounced dead on arrival. The residence of the Balapitiya Pradeshiya Sabha chairman Saman de Silva was also attacked . Two hotels and a restaurant owned by the Ambalangoda Mayor were also attacked. In a frenzy, anti-government mob attacked even a prison van carrying inmates in Colombo.

Right through Monday evening and night, anti-government mobs tried to force their way into the official residence of former Prime Minister Mahinda Rajapaksa. A crowd which forcibly entered the compound torched three parked vehicles. The police had to fire in the air to disperse the crowd. Mahinda Rajapaksa could be taken out of the building by the police only in the morning of Tuesday.

The government, which had declared a State of Emergency on May 6, and had also acquired the right to call in the army, failed to protect public and private property attacked by anti-government, anti-Rajapaksa mobs. Initially, the law and order machinery had failed to prevent the pro-Rajapaksa group from marching to the Galle Face protest center. It had failed to anticipate the destruction that the mob would wreak there. Subsequently, the police and the army failed to use Emergency powers to prevent the widespread retaliatory violence and arson.

Tuesday has been relatively calm, partly because there is an all-island curfew. But the trade union actions planned will ensure that the country does not return to normal. Meanwhile, the masses continue to face shortages of essentials like cooking gas, milk powder. And the government is continuing to face a severe forex shortage. Forex is needed to import essential foods, medicines and industrial intermediate goods. Sri Lanka is an import-dependent country even for daily needs.

Meanwhile, the Speaker of parliament has requested President Gotabaya Rajapaksa to convene the House immediately. It had been adjourned till May 17 following unruly behavior of the MPs.

With the President and the political parties being unable to come to an agreement on the formation of a national government, they have requested the Bar Association of Sri Lanka (BASL) to mediate and help form a government. The BASL has submitted a detailed set of proposals but discussion on it is yet to begin. The reconvening of parliament might speed up consideration of the BASL’s proposals. 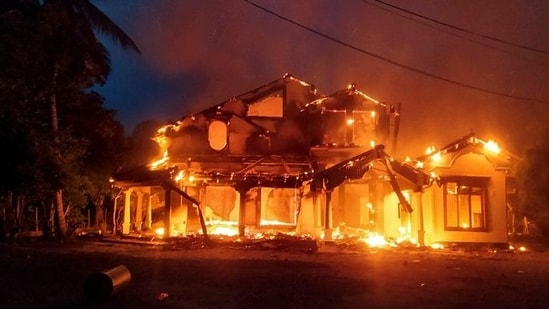