Wickremesinghe succeeds Mahinda Rajapaksa, who quit office on May 9, after his followers unleashed violence on peaceful anti-government demonstrators in Colombo and earned the public’s wrath. Sri Lanka saw violence and arson on a scale not seen in recent decades.

Seventy three-year-old Ranil Wickremesinghe was chosen by President Gotabaya Rajapaksa after others, who were invited to take up the job, refused to accept the invitation, saying that the President should quit first. But the President refused to oblige, saying that he would vacate his seat only when he is ousted by the set Constitutional procedure, that is impeachment through due process.

The President had told Wickremesinghe that he had accepted the Bar Association of Sri Lanka’s (BASL) proposal, which Wickremesinghe had already endorsed. The BASL had envisaged a phased, step by step, transition from an Executive Presidential system to a parliamentary system spread over several months.

After Wickremesinghe accepted the President’s invitation, the leader of the opposition and the chief of the Samagi Jana Balawegaya (SJB), Sajith Premadasa, wrote to the President saying that he is willing to be appointed Prime Minister. But it was too late. He had missed the bus.

Though the President has made Wickremesinghe Prime Minister, he has to get, at the earliest, the support of 113 out of the 225 members of parliament. This is not going to be an easy task. He himself does not have any MPs as he is the sole MP from the UNP. But he hopes to get the support of a substantial section of the SJB, whose MPs are tired of Sajith Premadasa’s incompetent and indecisive leadership. The SJB is after all, the chip of the old UNP.

The Sri Lanka Podujana Peramuna (SLPP), the party led by the Rajapaksas, is now divided between a rebel group, the Gotabaya Rajapaksa group and the Mahinda Rajapaksa group. But the attraction of becoming ministers is likely to make these groups support Wickremesinghe. Wickremesinghe’s supporters are now hard at work garnering support for their leader. They are confident of getting majority support.

All major institutions in Sri Lanka, secular, religious or economic, have appealed to MPs to sink their partisan agendas and help form a stable government to tackle the grave economic crisis and win back the withering confidence of international donors. An urgent need for stability has been driven home also by the gruesome violence the island saw when scores of houses and vehicles were burnt.

Wickremesinghe’s USP is that he is knowledgeable, educated, Westernized and has good contacts overseas. Although he is known as pro-West, he has cultivated good relations with China too. He also has good relations with India, the regional power. He is truly internationalist. That adds to his relevance as it is about time Sri Lankans shed their isolationist mentality and integrated with the regional and global economies.

Between 2002 to 2004, he put Sri Lanka on a peace process with the aim of weaning the Tamil separatists from violence and separatism. He also tried to get Sri Lanka a hefty development package for the anticipated post-war era. But his efforts were thwarted by majoritarian nationalists egged on by the then President Chandrika Kumaratunga.

However, Wickremesinghe came back to power as Prime Minister in 2015 after the defeat of President Mahinda Rajapaksa at the hands of his nominee for President, Maithripala Sirisena. But his tenure as PM under Sirisena was rocked by conflicts. The weakened administration was blamed for scams and also the Easter Sunday suicide attacks which claimed more than 250 lives.

Born to a wealthy, political family, Wickremesinghe qualified as an Advocate from the Ceylon Law College in 1972. Entering active politics in the mid-1970s with the United National Party, he was first elected to Parliament from the Biyagama electorate in the 1977 parliamentary elections and was appointed Deputy Minister of Foreign Affairs, by his uncle President J. R. Jayewardene. He was thereafter appointed Minister of Youth Affairs and Employment, becoming the youngest Cabinet Minister in Sri Lanka. In 1989, President Ranasinghe Premadasa, appointed him as Minister of Industry, Science and Technology and Leader of the House. He succeeded D. B. Wijetunga as Prime Minister in 1993.

He was appointed Leader of the Opposition in November 1994 following the assassination of Gamini Dissanayake during the campaign for the 1994 presidential election. On 8 January 2015, Wickremesinghe was appointed Prime minister by President Maithripala Sirisena, who had defeated President Mahinda Rajapaksa in the 2015 presidential election. Wickremesinghe lost his position after the defeat of his coalition in the 2020 parliamentary elections. 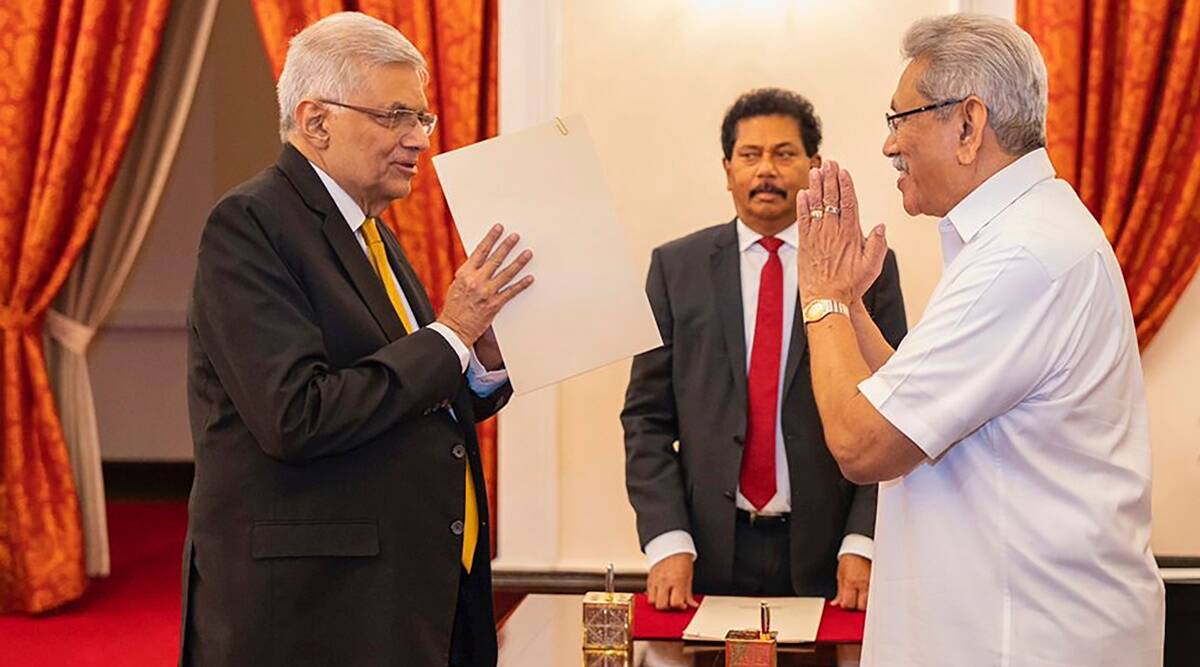