Emergence of political consensus made the difference

When Sri Lanka was teetering at the edge of a politico-economic abyss, many wondered if it was on the way to becoming a failed state. Mercifully, a political consensus emerged this week, and the new Ranil Wickremesinghe government is attending to the economic problem which was the root of the political crisis.

Political parties which opposed President Gotabaya Rajapaksa vehemently, were unwilling to accept Ranil Wickremesinghe, his nominee for the Premiership, and the political situation looked irredeemable. With no political stability, finding a solution to the grave economic problem looked impossible.

Ruling party thugs had unleashed violence against peaceful anti-Gotabaya and anti-Mahinda Rajapaksa protestors. Following this, their counterparts in the opposition retaliated with widespread violence, burning buses and setting fire to houses of former Ministers, ruling party MPs and other party functionaries, in five districts.

But perhaps due the unusual scale of the violence, and possibly due to pressure from international donors (whose help is critical for ending the severe shortages in the market), the parties in Parliament suspended their petty rivalries and vacuous partisan agendas, and decided to support Prime Minister Wickremesinghe in his brave bid to pull the economic chestnuts out of the fire.

If the political parties did not cooperate, donors would have stopped funding, or dragged their feet on giving funds. And the suffering masses would have turned their wrath on the opposition parties instead of the Rajapaksa clan.

At one stage, SriLanka did look like a candidate for being dubbed a failed state, going by the definition of a failed state given by Harvard Professor Robert I. Rotberg in his 2016 publication Failed States, Collapsed States, Weak States: Causes and Indicators.

According to Rotberg: “Nation-states fail because they are convulsed by internal violence and can no longer deliver positive political goods to their inhabitants. Their governments lose legitimacy, and the very nature of the particular nation-state itself becomes illegitimate in the eyes and in the hearts of a growing plurality of its citizens.”

States vary on the strong-weak scale according to the availability and distribution of public goods which are: political goods, economic goods and social goods, Rotberg says. In a strong state, citizens are able to resolve their disputes with the state and with their fellow inhabitants without recourse to arms or other forms of physical coercion.

Modern, stable states provide predictable, recognizable, systematized methods of adjudicating disputes. And a key political good is the assurance that citizens can participate freely, openly, and fully in the political process. This calls for tolerance of dissent and difference; and assurance of human rights.

Strong states perform well across these categories. On the other hand, weak states show a mixed profile, fulfilling expectations in some areas and performing poorly in others. The weakest states perform poorly across the range of criteria. Some of these could be categorized as failing and others failed or even collapsed states.

Sri Lanka has been a mixed bag. It had three decades of violence in the North and East, and a few years of insurgency in the South. The state seemed to be weak. But even in the midst of these disturbances, the basic structure was working in most parts of the island. Social welfare and development was apparent in most places even as military operations and terror attacks were on. Therefore, a state could be failing in parts but not comprehensively.

Rotberg also distinguishes between states with sporadic violence and those with enduring violence. In Angola, Burundi, and Sudan, violence was enduring, making them very weak states. In Sri Lanka, violence had not been enduring and therefore it was a stronger state comparatively.

Strong states “unquestionably control their territories and deliver a full range and a high quality of political goods to their citizens. They perform well according to indicators like GDP per-capita, the UNDP Human Development Index, Transparency International’s Corruption Perception Index, and Freedom House’s Freedom of the World Report. Strong states offer high levels of security from political and criminal violence, ensure political freedom and civil liberties, and create environments conducive to the growth of economic opportunity.

On other hand, weak states “typically harbor ethnic, religious, linguistic, or other intercommunal tensions that have not yet, or not yet thoroughly, become overtly violent. Urban crime rates tend to be higher and increasing. In weak states, the ability to provide adequate measures of other political goods is diminished or diminishing.

Physical infrastructural networks have deteriorated. Schools and hospitals show signs of neglect, particularly outside the main cities. GDP per capita and other critical economic indicators have fallen or are falling, sometimes dramatically; levels of venal corruption are embarrassingly high and escalating. Weak states usually honor rule of law precepts in the breach. They harass civil society. Weak states are often ruled by despots, elected or not.”

“Criminal gangs take over the streets of the cities. Arms and drug trafficking become more common. Ordinary police forces become paralyzed. Anomic behaviors become the norm. For protection, citizens naturally turn to warlords and other strong figures who express or activate ethnic or clan solidarity, thus offering the possibility of security at a time when all else, and the state itself, is crumbling.”

Failed states exhibit flawed institutions. If legislatures exist at all, they are rubber-stamping machines, Rotberg says. Democratic debate is noticeably absent. And the judiciary is a “derivative of the executive rather than being independent, and citizens know that they cannot rely on the court system for significant redress or remedy, especially against the state.”

There is a special category of weak states, in which there is peace and order, but these are based on rigid control. These are dictatorships. North Korea and Cambodia under Pol Pot are examples. These “strong” states hide their weaknesses. They are “fundamentally weak but appear strong.” Avarice is also a major contributor to a state’s failure. Cornering of privileges by an elite, whether economic, social and tribal, creates antagonisms, disaffection, revolt and inequalities, Rotberg points out. All these make a state basically weak.

In contrast to strong states, failed states cannot even effectively control their territories. “Often, the expression of official power is limited to a capital city and one or more ethnically specific zones,” he says. Afghanistan prior to the Taliban takeover was of this kind.

But failure is preventable and recovery is possible, says Rotberg. He cites Lebanon’s recovery from the civil war as an example. Once a cease-fire was forged in 1990, Lebanon returned to normal after decades of strife. Cambodia also recovered after Pol Pot’s exit. Sri Lanka, which was teetering at the edge of a collapse, is expected to recover, now that a consensus is emerging on the political set-up, and violence has ended. 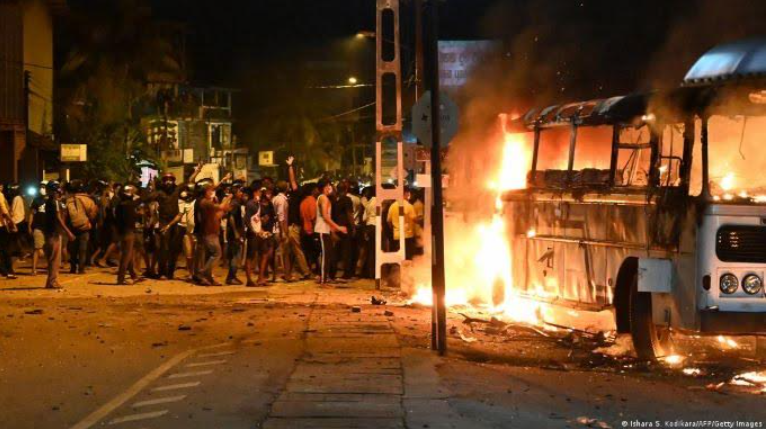