Counter to China in Asia

A new economic bloc comprising twelve countries of the Indo-Pacific region and the United States was unveiled on Monday in Tokyo on the sidelines of President Joe Biden’s visit. Christened as the Indo-Pacific Economic Framework (IPEF), it is conceived as the economic correlative of the US Indo-Pacific Strategy.

The Biden Administration expects that the IPEF will serve as an important tool of the US in the country’s geopolitical and economic competition against China. Along with the US, initial participants in the framework include major economies like Australia, India, Japan and South Korea, as well as developing countries, including Indonesia, the Philippines, Malaysia, Thailand and Vietnam, and smaller nations like Brunei, New Zealand and Singapore.

Broadly, the IPEF bloc would provide an early warning system for supply chain issues, encourage industries to decarbonise and offer US businesses reliable Asian partners outside China. In a nutshell, the US wants to boost its profile in Asia’s economic realm, where China is the dominant country.

The IPEF would include four different modules covering fair trade, supply chain resilience, infrastructure and decarbonisation, tax and anti-corruption.With Monday’s kickoff, negotiations in each of these areas will soon ensue. Each of the 13 participating countries will be allowed to choose in which of the four areas to pursue deals without having to commit to all of them. Parameters for the negotiations should be set by late June or early July, and the Biden administration hopes to wrap up any agreements within 12 to 18 months to then submit to each government for ratification.

In reality, the IPEF is a desperate move by the Biden administration to burnish its economic profile in Asia as a credible counterbalance to China. It is designed to project the US in the economic leadership of the Indo-Pacific region. The goal is to make a splash in the Asia-Pacific region after the US’ ignominious exit during the Donald Trump presidency from the Trans-Pacific Partnership, which, ironically, was Washington’s brainchild in the first instance and President Obama’s signature trade agreement.

The IPEF is neither a “pact” nor a “deal,” as the Indian media seems to think. It is what it says — a loose framework of Asian countries that would provide an early warning system for supply chain issues, encourage industries to decarbonise and offer US businesses reliable regional partners outside China.

It will make no binding commitments regarding market access characteristic of trade deals or free trade agreements, because that will be a hard sell in the US where protectionist sentiments are well entrenched. But it will provide for ambitious labour and environmental standards and create new guidelines for how data flows between countries. A White House fact sheet comes straight to the point when it says, “IPEF will enable the United States and our allies to decide on rules of the road that ensure American workers, small businesses, and ranchers can compete in the Indo-Pacific.”

Under the IPEF, the Biden administration is trying to dominate the rules and standards of digital technologies like artificial intelligence and 5G. But the rules of digital trade and technology that the US wants to promote are too “American,” and many countries in the region simply cannot meet the so-called high standards.

The US’ goal to isolate China from regional countries will make the implementation of IPEF rather problematic insofar as the framework serves US interests at the expense of regional countries by setting higher thresholds on digital economy, environmental protection and other fields in line with US economic policies. Besides, ASEAN countries are in no mood to decouple from China and the existing pattern of supply chain division has lasted a long time and has brought benefits to the countries of the Indo-Pacific.

Importantly, China is spearheading a comprehensive free-trade effort in Asia, especially with the operationalisation of the Regional Comprehensive Economic Partnership (RCEP), whereas the IPEF has little to offer to Asian economies by way of tangible economic benefits such as opening up more of the US market to Asian people. There are no market access or tariff reduction provisions in the framework, which lacks trade incentives that countries in the region desire. Above all, the IPEF may take years to take shape and China gets ample time to render it ineffective.

The Biden Administration is unsure as of now whether to get the IPEF pact ratified by the Congress where it may meet sudden death. Put differently, a question mark needs to be put on the sustainability of the IPEF beyond 2024. The few countries in the Asia-Pacific region who have joined the IPEF will keep their fingers crossed.

Reportedly, India was initially reluctant to join the IPEF, as it is keener on having a bilateral trade pact with the US and plurilateral agreements under the Quad. India’s concerns about a non-FTA deal are perfectly understandable, being cautious about the non-tariff-cutting multilateral framework and doubting whether it can really provide substantial benefits to any emerging economy in South Asia.

However, Delhi and Washington reached an understanding during the Indian Finance Minister Nirmala Sitharaman’s visit to the US last month when it was agreed that although the IPEF will demand “high standards” by way of establishing and maintaining trade facilitation, supply-chain resilience and infrastructure, it will nevertheless be a “strategic move” that targets China, something in which there is a strong US-Indian congruence of interests.

For the US, of course, it is almost necessary to get India onboard the IPEF, as the latter is considered as the key cornerstone for the US Indo-Pacific strategy. Delhi gave in to the US entreaties although its preference would have been to build a South Asia-Indian Ocean economic zone by obtaining bilateral FTAs with the US and negotiating the best possible market access.

Conceivably, India would do some cherrypicking when the final IPEF package shapes up. On its part, the Biden Administration too would be aware of the futility of attempts to integrate India’s quasi-autarkic economy and autarchic polity into the liberal world economy.

Commenting on Biden’s Asia tour, the New York Times wrote recently, “With prices rising, stock markets falling and fears of recession spreading at home, the president is eager to demonstrate that he is focused on stabilising the economy, especially with midterm elections five months away.” But the IPEF is going to be a hard sell in the Indo-Pacific.

Ambassador M.K.Bhadrakumar is retired from the Indian Foreign Service. He writes extensively on foreign affairs. 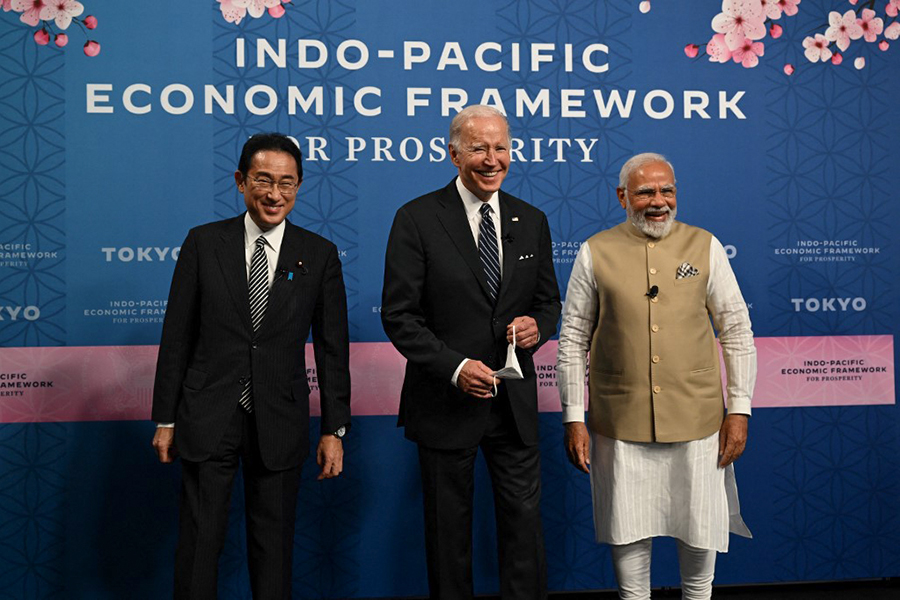 Cover Photograph: From L-R: Japan’s Prime Minister Fumio Kishida, US President Joe Biden, and India’s Prime Minister Narendra Modi at the launch of Indo-Pacific Economic Framework for Prosperity at Izumi Garden Gallery in Tokyo on May 23, 2022