Tunisia, the only lasting success of the Arab Spring, today has a President who seems determined to crush the democratic rights that Tunisians have guarded zealously since they overthrew strongman Zine Al Abdine in 2014.

The Jasmine Revolution, emulated in many Arab countries, spearheaded the Arab Spring. In Tunisia it led to the framing of a new constitution that provided for civil and womens’ rights and led to the sprouting of a number of new media channels and newspapers as well as political parties and civil society groups.

It was in this environment that the last presidential elections in 2019 brought Kais Saied to the Presidency-- reflecting the fatigue of the people with established non performing political leaders and with corruption. Kais Saied, a non-party jurist and former university professor promised that he would establish a true democracy in which the people were truly sovereign and that he would eradicate corruption. The people supported him but in less than a year disillusionment set in with increasing apprehension that rather than a true democracy Tunisia could be heading for one man rule.

The process started a year and few months into Saied’s presidency. In July 2021, the President sacked the Prime Minister Hichem Mechichi, who had taken office in July 2020. He also suspended parliament; and assumed executive authority citing emergency provisions in the Constitution. His argument was that his actions were necessitated by the political paralysis, economic stagnation and a poor response to the coronavirus pandemic. He said he would not be a dictator and also maintained that the 2014 Constitution was not sacrosanct and could be changed. He announced that he would appoint a committee to help draft amendments to the 2014 constitution and would hold a referendum . And that elections would be held in December2021. But soon after he declared a state of emergency till the end of 2022. Initial protests were dealt with by the military and opponents were jailed. Even many of his supporters began to look askance at the functioning of the Presidency.

In April 2022 the President dissolved Parliament after its members held a virtual meeting online. The president declared that the legislators who had opposed presidential rulings in the virtual meeting would be prosecuted on heavy charges of “conspiring against state security” and Tunisia’s justice minister had launched a judicial investigation against more than half of the members who took part in the online session.

Kais Saeid had replaced the judicial council that guaranteed judges' independence and also threatened to restrict civil society groups. He had dissolved the independent electoral commission saying he would replace most of its members and announced that in the next Parliamentary elections parliamentary election, which would involve two rounds, people would have vote for individuals rather than lists as in previous elections. The commission head Nabil Baffoun told the media that President Kais Saied's decree meant the election body would no longer be independent.

His actions had been protested by the opposition with the largest party Ennahda stating it would boycott any referendum that took place without a national dialogue first and the opposition had objected to the President’s attempt to change the political system unilaterally. The members of the dissolved Parliament had formed a group called the National Salvation Front to reach out to Saied, but he rejected any dialogue with people who he said wanted to target the Tunisian state.

Kais had said that a referendum on changing the Constitution would be held in July 2022 followed by elections in December. The referendum would ask the people “Do you agree with the new Constitution?”. Saeid had also hinted that no foreign observers would be allowed to oversee the elections.

The President had set up an advisory committee under law professor Sadok Belaid, with law and political science deans, to draft a new constitution for a new republic. But the political parties had been excluded. In parallel, another committee was established, comprising six national organizations, including the powerful UGTT Labour Union, to submit proposals for reforms. This committee also did not include any political party.

Tunisia's major political parties said they would fight Saied's decision to exclude them and accused him of seeking to consolidate autocratic rule. The UGTT labour union was planning to hold a national strike over wages and the economy after it had refused to take part in the limited dialogue proposed by the president. The Union had more than a million members and, with the economy in doldrums, it could fashion a real challenge for Saeid.

Meanwhile the President was using the military courts to punish his critics. Saif Eddine Makhlouf, the head of the conservative Karama Party, and three other party members were charged with assaulting policemen last year and jailed. The military court issued 5-month prison sentences for Makhlouf and Nidhal Saoudi and 3-month terms to Mohamed Affas and Meher Zid raising questions about the human rights situation. Rached Ghannouchi, the leader of the Ennahda party and speaker of the dissolved parliament, said "the trials are a consolidation of dictatorship".

There had been widespread protests against the President in early May 2022, with thousands of Tunisians demanding a return to the normal democratic order and rejecting his replacement of the independent electoral commission with his nominees. Slogans such as "The people want democracy" and "Saied has led the country to starvation" were reported to have been raised by demonstrators in the capital, Tunis. Activists were reported to have said that Tunisians were facing a failed dictatorship that was leading the country to economic disaster.

President Kais Saeid’s actions had been internationally condemned with Turkish President Erdogan calling the dissolution of Tunisia’s parliament a smear on democracy. Western countries had urged a dialogue in which unions, political parties and civil society could participate to enable the return of democracy so that they could help Tunisia financially.

Tunisia's economy and public financial system were facing a crisis and the government was in talks with the International Monetary Fund for a rescue package. The growing poverty and hardship were reflected in the increasing prices of essential items and the long daily queues for bread. But getting IMF help would come with conditionalities such as freezing public wages that would be painful for wage earners and likely to be opposed by the UGTT which was already challenging Saeid’s moves.

If the President continues along his chosen path Tunisia could face any of the following outcomes:--

Increasing clashes between a desperate and economically beleaguered citizenry and the army and security forces resulting in deaths and detentions and the consolidation of Saeid’s position.

A military, tired of the situation, refusing to obey the President’s orders and conduction a coup-a common occurrence in many Arab countries especially if the IMF and other countries refuse to open their wallets.

The security and armed forces joining the protestors and isolating the President(shades of Iran’s 1979 revolution)-leading to his detention or exile-again not uncommon in the region- and the opposition parties forming an interim government; retaining the 2014 Constitution; and holding elections.

A new government, possibly a coalition, would take power and try to meet the people’s expectations-economic primarily and then political. Whether it would succeed is the big question? 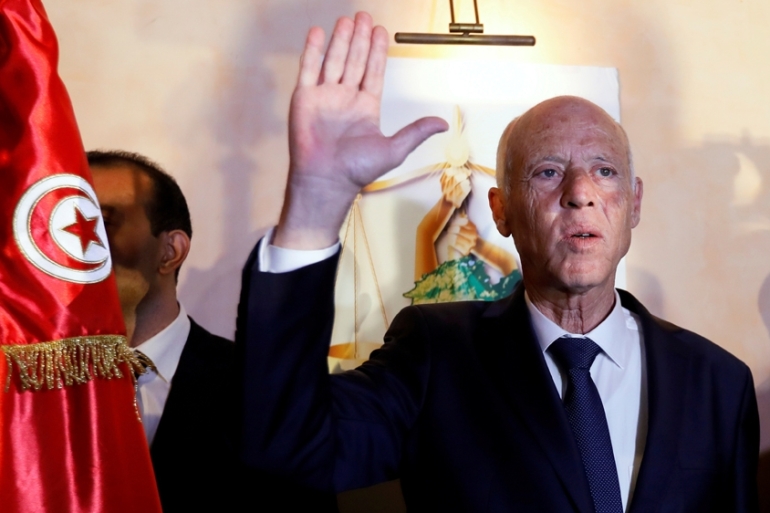