NEW DELHI: Jordan -- that had become the first Arab country to openly negotiate a prisoner swap with the Islamic State -- has executed two Islamic State-linked prisoners, after the militant group released a video purportedly showing a captured Jordanian pilot being burnt to death.

The video emerged online on Tuesday after a deal between the militants and Jordan involving the exchange of pilot Moaz al-Kasasbeh for a suicide bomber, Sajida al-Rishawi -- being held by Jordan -- appeared to have stalled. It is one of the most brutal and slickly produced videos to have been released by the group. Kasasbeh -- who was captured by the Islamic State after his plane came down near Raqqa in Syria -- is burned alive in a cage. 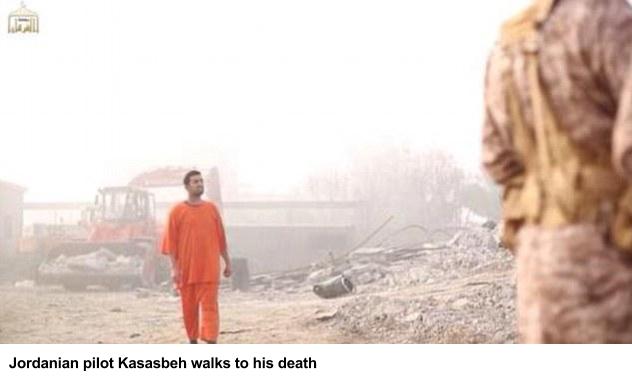 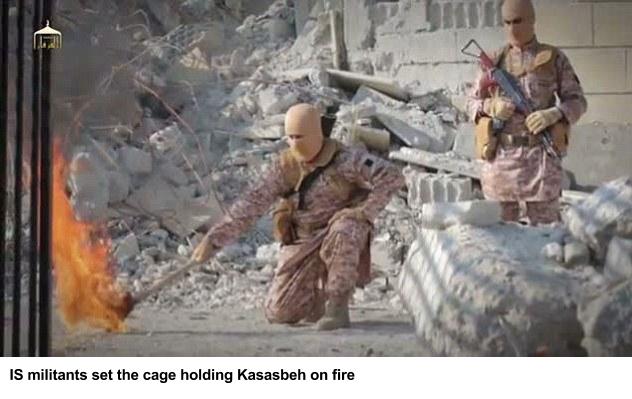 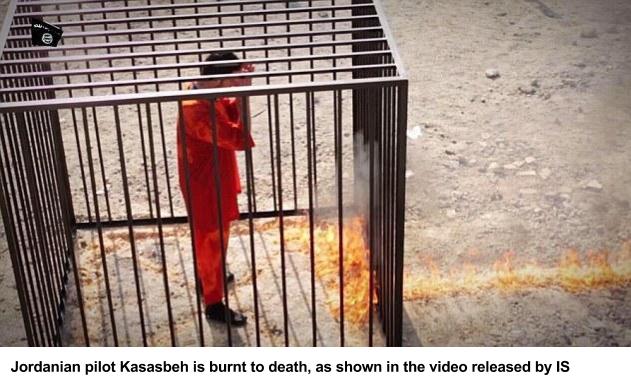 In a similar tone to the Islamic State’s other execution videos, Kasasbeh, before his death, delivers a condemnation of the west and Jordan, urging Jordanian fathers to prevent their sons from joining the US-led coalition that is currently fighting the Islamic State in Iraq and Syria. “The message that I direct to the Jordanian people: Know that your government is an agent of the Zionists,” Kasasbeh says whilst giving a detailed account of the role of every country involved in the fight, specifically Arab nations.

At the end, Kasasbeh -- dressed in an orange jumpsuit (as were the other foreign hostages executed in similar fashion) -- is seemingly doused in fuel and burnt alive. The video shows the cage where Kasasbeh is contained being entirely engulfed by flames, which is then flattened by a bulldozer.

The video was released by the media arm of the Islamic State, al-Furqan. It’s release coincided with Jordan King Abdullah’s visit to Washington, which was abruptly cancelled. Jordan state television stated that the video was filmed on January 3, long before the details of the prisoner swap had been finalized. Jordan maintains that the swap stalled because there was no indication that Kasasbeh was still alive.

Mamdouh al-Ameri, spokesperson for the Jordanian armed forces, confirmed the pilot's death and then vowed revenge soon after the video was published. “While the military forces mourn the martyr, they emphasise his blood will not be shed in vain. The revenge will be as big as the calamity that has hit Jordan,” Ameri said in a televised address.

Jordan, in response, has vowed to execute six of its Islamic State-linked prisoners, of which two, including Rishawi, had been executed at the time of writing. Ziad al-Karbouli was the other prisoner to be hanged. Rishawi -- whose release the Islamic State were attempting to negotiate -- was held in connection to 2005 bombings at the luxury Radisson SAS hotel in Amman, which killed 60 people.

Kasasbeh’s execution has drawn widespread condemnation, with US President Barack Obama calling the video “one more indication of the viciousness and barbarity of this organization” and adding that it will serve to “redouble the vigilance and determination on the part of the global coalition to make sure that they are degraded and ultimately defeated.”

The video itself follows a video showing the execution of Japanese hostage Kenji Goto -- whose fate was summarily tied to that of Kasasbeh. Whilst Jordan had agreed to a prisoner swap, the Islamic State militants added another condition for the release of Kasasbeh. In a recording that emerged after Jordan had said it was ready to negotiate, Goto says, “I am Kenji Goto. This is a voice message I've been told to send to you. If Sajida al-Rishawi is not ready for exchange for my life at the Turkish border by Thursday sunset 29th of January Mosul time, the Jordanian pilot Muath al-Kasaesbeh will be killed immediately.”

Japan maintained that it would not negotiate with terrorists. As negotiations seemed to stall, a video of Goto’s beheading has emerged in response. In the video, Goto was shown kneeling in the desert in an orange jumpsuit with a man clad in black, dubbed “Jihadi John” for his British accent, standing beside him. “To the Japanese government: You, like your foolish allies in the Satanic coalition, have yet to understand that we, by Allah’s grace, are an Islamic caliphate with authority and power, an entire army thirsty for your blood,” the man said in English, according to the Site Intelligence group.

Previously, Goto had appeared in a video with another Japanese hostage, Goto made an appearance in a video with another Japanese hostage Haruna Yukawa. The two men were dressed in orange jumpsuits alongside a knife-wielding militant dressed in black. In the video, the militant demanded $200 million from the Japanese government within a period of 72 hours in exchange for the two captives. Yukawa was reportedly executed soon after.

The Islamic State has a number of foreign hostages, of which, in addition to Kasasbeh, Goto and Yukawa, American aid worker Peter Kassig, US journalists James Foley and Steven Sotloff, and British aid workers David Haines and Alan Henning have been the most prominent executions. These executions were recorded -- the men all dressed in orange jumpsuits -- and released by the Islamic State accompanied by messages directed to the UK and US for their role in bombing the militant group in Iraq and Syria.