ELECTRONIC INTIFADA: Israel’s hardline right-wing foreign minister Avigdor Lieberman plans to introduce a bill into the country’s parliament, the Knesset, which would implement the death penalty for Palestinian political prisoners in Israeli lockup.

Alongside a photo reading “Death penalty for terrorists,” Lieberman wrote on his Facebook page that his party — Yisrael Beiteinu (Israel Our Home) — supports the death penalty for Palestinian prisoners.

“The struggle against terror is the largest challenge for the 21st century world. This is also Israel’s great challenge, but there’s a large gap between what Israel preaches and what is done here [in Israel],” Lieberman wrote. 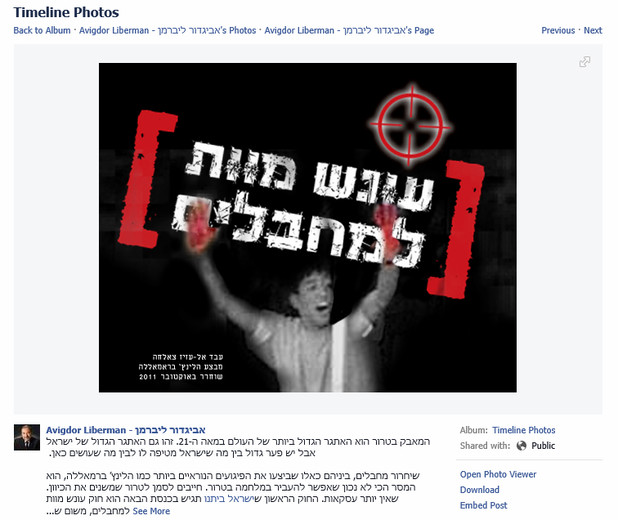 “The first law that Yisrael Beitenu will propose is a death penalty for terrorists, because otherwise we’re ordering up more terror and yet more terror,” Lieberman continued. At the time of writing, Lieberman’s post had already received more than 1,400 “likes” and had been shared 185 times.

An estimated 6,200 Palestinians were in Israeli jails as of 1 December, according to Addameer, a Ramallah-based group that monitors the arrests and detentions of Palestinians.

Despite Israel’s claims to be a democracy, more than ninety-nine percent of Palestinians tried in its military courts are convicted, according a military documentleaked to the Israeli daily Haaretz in 2011.

Lieberman also said that Israel should not negotiate any more prisoner-release deals with the occupied West Bank-based Palestinian Authority or Hamas, the Palestinian political party that governs the besieged Gaza Strip.

“Releasing terrorists, including those who carried out the most terrible attacks, like theRamallah lynch[ing], is the worst possible message that can be conveyed in the war on terror,” he wrote, referring to the killing of two Israeli soldiers in that city at the outset of the second intifada in 2000.

“You’ve got to signal to terror that you’re changing your direction,” he said. “That there are no more deals.”

Israel agreed to release 104 Palestinian prisoners in four waves as part of precondition to returning to “negotiations” with the Palestinian Authority in 2013. Yet, after the first three stages were completed, Israel reneged on the agreement and did not let the last twenty-six prisoners go home.

Meanwhile, numerous conditions were imposed on prisoners who were released and many from the West Bank were forcibly transferred to Gaza.

Lieberman concluded by claiming that another war on Palestinians in Gaza is on the horizon. “It is clear to everyone today that a fourth engagement with Hamas is inevitable, and that what’s important is to plan … now how to avoid the fifth,” he wrote.

Lieberman’s post framed the wars on Gaza as a war against Hamas, although Israeli forces target Palestinians of all political stripes in its military offensives in Gaza.

“Every military operation must end decisively; otherwise we erode our capacities and our deterrence,” Lieberman claimed. “The fact that we enter into a military confrontation with Hamas every other year makes it impossible for the State of Israel to make long term plans, like a normal state could, in the realms of policy and economics.”

Israel’s latest assault on Gaza — dubbed Operation Protective Edge — ended with a ceasefire in late August. During that attack, Israel targeted Palestinians by air, land and sea and more than 2,200 Palestinians — mostly civilians — were killed, according to United Nations monitoring group OCHA.

Lieberman did not specify what he meant by a “decisive” conclusion to war on Gaza, but he has in the past advocated for Israel to reinstate its on-the-ground occupation of the area. Though Israel’s settlers were evacuated from Gaza in 2005, it enforces a suffocating siege on Palestinians in Gaza.