NEW DELHI: The new government in Greece has revealed an outline summary of reforms demanded by Eurozone leaders in order to secure a bailout extension. The summary was unveiled after Greece delayed presenting reforms by 24 hours after initially agreeing to deliver its proposals on Monday.

The summary, released instead, contains widely anticipated reforms including plans to combat tax evasion and fuel and tobacco smuggling. According to the BBC, government officials said they were releasing the summary before formally submitting it to guard against leaks to the press.

The main points of the summary include:

Greece’s creditors -- the European Central Bank, the European Commission and the International Monetary Fund -- are expected to deliver their verdict on the proposals later on Tuesday. If approved, it will secure Greece a four month loan extension.

The proposed reforms are the first major policy decision taken by the new government in Greece after Alexis Tsipras was sworn in as the country’s new Prime Minister last month. At 40, he is the country’s youngest Prime Minister since 1865. Tsipras “Coalition of the Radical Left” -- known colloquially by its acronym SYRIZA -- won the January 25 polls and went on to become the winning coalition getting 36.3 percent of the popular vote and 149 out of 300 seats in the Hellenic Parliament.

The meteoric rise for Syriza, with the party polling at 5 percent in 2010, was largely due to the anti-austerity position of the party, which promised to renegotiate Greece's €240bn (£179bn; $270bn) bailout by international lenders. 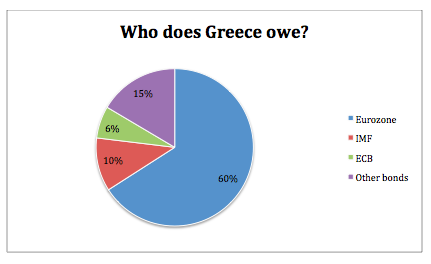 Soon after the results, Germany and Netherlands led warnings to the new anti-austerity Greek government about rolling back budget cuts meant to get spending under control. “Germany bears no responsibility for what happened in Greece,” Volker Kauder, the parliamentary caucus leader of German Chancellor Angela Merkel’s Christian Democrats, told reporters in Berlin. “The new prime minister must recognize that.”

“The message ‘we want your support but not your conditions’ won’t fly,” said Dutch Finance Minister Jeroen Dijsselbloem. “My message will be that we’re open to cooperation but that the support from Europe also means the Greeks have to make an effort.”

Meanwhile, the head of the European commission, Jean-Claude Juncker, cautioned that a reduction in the country’s debt was “not on the radar”. The EU issued a statement reiterating that Greece would risk its place in the eurozone if it failed to meet its austerity and debt commitments.

At first, all signs seemed to indicate that Tsipras would not budge from his election promise of renegotiating the debt. The biggest sign was the appointment of the new cabinet, with appointments indicating that the new leader was going to be unwilling to back down from pledges to dismantle punitive belt-tightening measures. Yanis Varoufakis -- a radical economist who has described austerity programmes as “fiscal waterboarding” -- was given the post of Finance Minister. Economist and veteran left-wing politician Giannis Dragasakis was appointed Deputy Prime Minister, and tasked with overseeing negotiations with the “troika” of the European Commission, the IMF and the ECB. The 39 member cabinet is in fact dominated by academics leaning toward the left.

This Friday, however, Greece agreed to an extension to its financial rescue programme with eurozone countries. Before the deal had been reached, Tsipiras had declared that "we will not succumb to psychological blackmail,” and “we are not in a hurry and we will not compromise.” However, the fact that Greece has had to agree to an extension of the bailout -- as opposed to a new loan that would give the country time to come up with a more permanent solution -- indicates that Tsipiras is now on the backfoot.

Soon after the deal was announced, one veteran member of the Syriza movement, Manolis Glezos, complained that agreement represented a reversal of the party’s electoral position. “I apologise to the Greek people because I have contributed to this illusion,” Glezos posted online. “Renaming the Troika as ‘institutions’, the bailout as an ‘agreement’ and creditors as ‘partners’... does not change the previous situation, as in the case of renaming meat as fish,” Glezos wrote in a statement that accuses the Greek government of working with the Troika.

Gabriel Sakellaridis, a spokesperson for the Greek government immediately countered the statement. “Manolis Glezos is someone whom we will never cease to honour but... I believe that statement in particular was misguided and wrong.”

However, it is reasonable to postulate that the deal is considered -- by many within Greece and outside -- a major climb-down for Tsipras, as it is in contradiction to his position on reversing budget cuts. Acknowledging this reality, Tsipras in a televised address said that his government had "won a battle, not the war" and labelled the deal an "important negotiating success.”

A brief look at what Syriza wanted and what Syriza got (source: The Independent) indicates that a compromise has most definitely been made. If the creditors agree, then Tsipras may be credited for winning a heavily compromised battle, but what about the war four months down the line -- especially if splits begin emerging within the Syriza movement over the terms that ‘won’ it the battle?