Blow to Secularism in Egypt

NEW DELHI: Earlier this week, an Egyptian court sentenced the country’s most visible political activist to five years in a maximum security prison. Alaa Abdel Fattah was a leading secular figure in the 2011 revolt that toppled autocrat Hosni Mubarak and signalled the coming of democracy to Egypt. Fattah was first sentenced in absentia to 15 years in prison for participating in an unsanctioned demonstration, after which a retrial was ordered.

As the verdict was read out, chants of "Down, down with military rule!" resonated in the courtroom. International watchdog Amnesty International said that verdict indicated that Egypt's justice system is "spiralling out of control.”

The verdict came a day after Egyptian President Abdel Fattah al Sisi vowed to release young people -- estimated to number in thousands -- who may have been wrongly jailed during Egypt’s crackdown on the opposition. It was during this crackdown that the law that was used to incriminate Fattah was instituted. 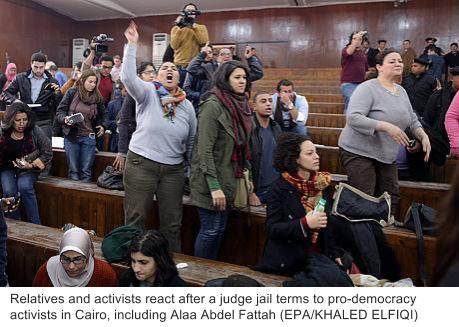 The law was used against Ahmed Maher, leader of the April 6 Youth Movement, whose appeal against a three month jail term for organising an unauthorised protest was turned down by a court last month.

Rights groups say more than 20,000 people have been arrested in crackdown since then army chief Al Sissi toppled Islamist president Mohammed Morsi in July, 2013. Although a majority of these prisoners are believed to be Islamists, others -- including students, professors, journalists, doctors, engineers, and even children -- are included in the numbers.

This includes Ahmed Douma, a prominent Egyptian activist and blogger, who has famously been arrested under each consecutive Egyptian government in recent years. Douma was first arrested in 2009 at the border to the Gaza Strip, after he had entered it with a group of anti-war activists who wanted to express their solidarity with the Palestinian people. In 2013, Douma was arrested after calling then-President Morsi a killer and a criminal, although he appealed the verdict and was released without bail. More recently, Douma has been arrested under the new restrictive protest law. In December 2013, he was sentenced, together with Ahmed Maher and Mohammed Adel, to three years in prison with hard labour and a fine of EGP 50,000 for his participation in protests illegal under the new protest law. On February 4 2015, The Cairo Criminal Court sentenced Ahmed Douma along with 229 others to life imprisonment and was fined over $2 million on charges of rioting, attacking security forces and inciting violence in late 2011. 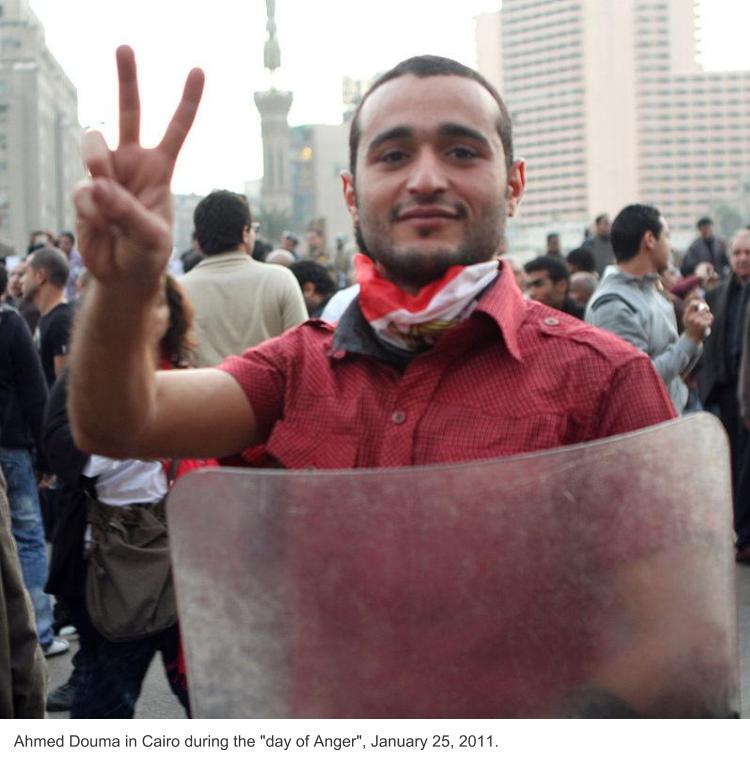 The list of young Egyptians jailed under restrictive laws includes Yara Sallam, a prominent human rights defender. Sallam was arrested along with 30 others marching near Ittihadiya Palace, the Presidential offices in Cairo, in a peaceful demonstration against the same law that curtails the right to protest. It also includes Mahienour el-Massry, a prominent human rights lawyer who was just sentenced to another two years in prison, despite having been released in November. 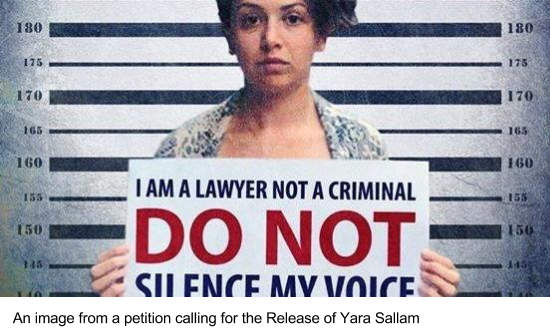 At the same time, the Egyptian government has to contend with Islamic militant groups within its own territory, specifically the Sinai peninsula -- with Ansar Beit al-Maqdis (ABM), that has carried out a series of attacks on security forces in the region, having pledged allegiance to the Islamic State. “After entrusting God we decided to swear allegiance to the emir of the faithful Abu Bakr al-Baghdadi, caliph of the Muslims in Syria and Iraq and in other countries,” the statement by the group said. The statement went on to ask Egyptians to rebel against "the tyrant," President Abdel Fattah el-Sisi, declaring that “we will continue to fight the army until the day of judgment.”

However, the importance of democracy is perhaps getting lost along the way.

“I know that despair is treason
but the revolutionary in my country
— even if he’s a sinless prophet —
when he sees the tyrant empowered
by the oppressed’s command
amid the rejoicing of the poor
will lose his faith.”

So go the words of a composition entitled “Graffiti for Two” -- written from inside prison jointly by Ahmed Douma and Abdel Fattah. The two reportedly collaborated by shouting to one another between cells.

Fatah best captured the frustration when he wrote, “Everyone knows that the current regime offers nothing to most of the young people of the country, and everyone knows that most of those in jail are young, and that oppression is targeting an entire generation to subjugate it to a regime that understands how separate it is from them and that does not want, and cannot in any case, accommodate or include them.”

These recent verdicts -- including Fatah’s -- is indication that the regime is not yet ready to listen.