NEW DELHI: A campus-wide vote involving academics, staff and students at the School of Oriental and African Studies, University of London culminated in favour of a full academic boycott of Israel, with 73 percent supporting the motion.

This unprecedented mandate is the latest in a string of successes for the Boycott, Divestment and Sanctions (BDS) movement in the United Kingdom. Two weeks ago, about 1000 artists in the UK signed a pledge to boycott Israel culturally. A few months ago, the executive committee of the National Union of Students, representing some 7 million British students, adopted BDS. The largest British trade unions, Unite and Unison, among many others, representing millions of workers, also voted to support BDS.

This support, perhaps, shouldn’t be so surprising, given a recent Chatham House poll of British public opinion that showed that Britons feel more "unfavourable" toward Israel than to any other country in the world, with the exception of North Korea. The BBC annual Globescan poll of international public opinion has consistently shown Israel competing with North Korea in popularity in most of the world, including in the UK, where a whopping 72 percent perceive Israel "mainly negatively."

In reference to this recent show of support, the Palestine Society and the BDS campaign at SOAS issued a statement saying:

“This historic result has brought us one step further in our struggle for freedom and justice. We do not tolerate any collaboration with academic institutions which are complicit in human rights violations and which do not practice the values of academic freedom and equality. We call upon other universities to show their solidarity by joining the academic boycott.”

The BDS movement is riding on the success of quite a remarkable 2014. Some of the highlights include more than 300 political parties, trade unions and campaign groups calling for the suspension of a the EU-Israel Association agreement; SodaStream announcing it is to close its factory in the illegal Israeli settlement of Mishor Adumim following a high profile boycott campaign against the company; a call for a military embargo on Israel launched by 6 Nobel laureates and dozens of celebrities and signed by more than 60,000 people; Bill Gates Foundation divesting from G4S over its role in Israeli prisons; and Israeli Apartheid Week, which took place in more than 160 cities across more than 32 countries in February.

However, the catalyst for these successes was a high-profile controversy. The year opened with an international controversy over the decision of Hollywood A-lister Scarlett Johansson to become a brand ambassador for SodaStream, the Israeli drinks machine manufacturer that operates a factory in an illegal Israeli settlement.

The move attracted particular attention because the Lost in Translation star was also an ambassador for Oxfam, an international NGO that condemns illegal Israeli settlements. Oxfam faced huge pressure to ditch Johansson and publicly criticised her decision.

Ultimately it was Johansson who brought the saga to a close when she stepped down as an Oxfam representative, but not before social media memes about her support for Israel’s apartheid regime had gone viral and the BDS movement had received unprecedented international media attention. SodaStream’s share price suffered the first of many hits. 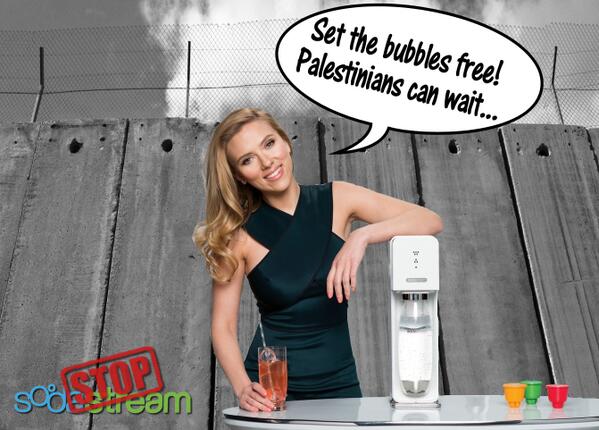 Thanks to ScarJo, albeit inadvertently, the BDS Movement skyrocketed into the international spotlight. In a statement, Oxfam said that businesses “such as SodaStream, that operate in settlements further the ongoing poverty and denial of rights of the Palestinian communities that we work to support." A SodaStream ad starring Johansson hawking water carbonators made by the company was aired during the superbowl, and the controversy surrounding the actress’ resignation from Oxfam was covered widely in the media.

The movement has been denounced as “anti-Semitic” by Israeli officials, with Israel’s Prime Minister Benjamin Netanyahu leading the attack, condemning the movement as aimed to destroy the Jewish state. "In the past anti-Semites boycotted Jewish businesses and today they call for the boycott of the Jewish state, and by the way, only the Jewish state," Netanyahu said at a conference of US Jewish organisations in Jerusalem. "I think that it is important that the boycotters be exposed for what they are, they are classical anti-Semites in modern garb," Netanyahu added, saying it was time to “delegitimise the delegitimisers."

Netanyahu said that the “most disgraceful” aspect of the movement was the participation of European companies in it, with what he has previously termed the “one sided stance” of Europe failing to recognise Palestinian incitement to terrorism.

Supporters of the movement disagree with this charge. Barghouti published an op-ed in the New York Times explaining the goals of the movement and stating that BDS “poses a serious challenge to Israel’s system of oppression of the Palestinian people, which is the root cause of its growing worldwide isolation.”

The “anti-Semitic” tag that equates the movement with racism is deeply ironical. The movement has consistently maintained that it is against all forms of racism, including anti-Semitism, and equating a boycott based on government policies that pro-boycott supporters deem oppressive as racism is problematic. This is akin to equating the Gandhi-led boycott of British goods as a measure of protest of colonial policies as racist, or the boycott of a self defined Islamic state, say Saudi Arabia for an unjustifiable human rights records as anti-Islamic.

Barghouti aptly concludes, “Would justice and equal rights for all really destroy Israel? Did equality destroy the American South? Or South Africa? Certainly, it destroyed the discriminatory racial order that had prevailed in both places, but it did not destroy the people or the country.”