In Pictures: Conditions in Gaza Worsen

GAZA: Israeli forces fired on Palestinians in Gaza every day during the month of February, particularly in the so-called Access Restricted Areas along the Gaza-Israel boundary, the United Nations monitoring group OCHA reported.

The Rafah crossing with Egypt — the sole exit and entry point for the vast majority of Gaza’s 1.8 million residents — remained closed throughout the month. According to OCHA, an estimated 30,000 Palestinians in Gaza were waiting to cross into Egypt, including medical patients and students.

The crossing was was opened only 158 days last year and was last opened in both directions between 20 and 22 January, OCHA reported.

Protests were held across Gaza to demonstrate “widespread frustration over the deteriorating situation,” particularly the slow pace of reconstruction after Israel’s destructive assault on Gaza last summer, the non-payment of salaries to public employees, the closure of Rafah crossing and the longstanding siege, OCHA added.

Only ten trucks of exports were allowed to leave Gaza via the Israeli-controlled commercial crossing between 3 February and 2 March. “Since the imposition of the blockade in June 2007, Israel has banned almost completely the exit of goods from Gaza to the West Bank and Israel, which were the main markets for Gaza products,” OCHA stated.

Meanwhile, in the occupied West Bank, Israeli settlers reportedly set fire to a Greek Orthodox Church in East Jerusalem and to a mosque in Jaba village near Bethlehem on 25 February. “In both incidents, racist graffiti was sprayed on the buildings’ walls,” OCHA reported.

“Death to the Arabs” was among the hateful messages sprayed on the walls of a secondary school in Urif village near Nablus late last month.

An Israeli man was lightly wounded after he was stabbed by a Palestinian man near the Old City of Jerusalem on 22 February.

A ten-year-old Palestinian boy was beaten with an iron bar by a group of settlers in Hebron late last month; the following day the child was detained by Israeli forces for allegedly throwing stones at an Israeli soldier, OCHA reported.

Israeli settlers beat a 55-year-old shepherd in the Hebron area while he was grazing his sheep near Susya settlement in late February. A group of settlers physically assaulted a Palestinian man with a metal pipe in Jalud village near Nablus on 17 February.

Earlier in the month, on 5 February, a five-year-old Palestinian boy in Hebron was seriously injured in a hit-and-run incident involving a settler vehicle.

“This is the second such incident so far in 2015,” OCHA stated. “During the whole of 2014, 23 Palestinians, including 17 children, were injured and two others were killed in traffic-related incidents involving Israeli settlers.”

On 4 February, Israeli forces raided a secondary school near Nablus while students were still in class, and fired sound bombs in the school premises, forcing all pupils to leave the school, OCHA reported.

Two days later, in the South Hebron Hills, Israeli forces beat and detained two fifteen-year-old children overnight after the head of Maon settlement complained that they were grazing their sheep on land planned for the expansion of the settlement, according to OCHA.

In Syria, UNRWA, the UN agency for Palestine refugees, repeatedly sounded the alarm that it was unable to successfully complete distribution of humanitarian aid in Yarmouk camp due to the deteriorated security situation.

“Over the previous two months, Yarmouk and its surrounding areas have seen a serious escalation in armed conflict, including frequent exchanges of fire and the use of heavy weapons, which have persistently disrupted the distribution of life-saving humanitarian aid to the 18,000 civilians trapped in the area,” spokesperson Chris Gunness stated on 3 March.

“UNRWA remains deeply concerned that no successful distribution has been completed since 6 December 2014,” he added.

The agency also warned that “with only two percent funding in the pipeline for 2015,” cuts to its emergency cash assistance programs for Palestinian refugees from Syria, including rent subsidies for those displaced to Lebanon and Jordan, “seem inevitable.”

Approximately half of the 560,000 Palestinian refugees registered with UNRWA in Syria have been displaced within the country, and a further 12 percent to neighboring countries. 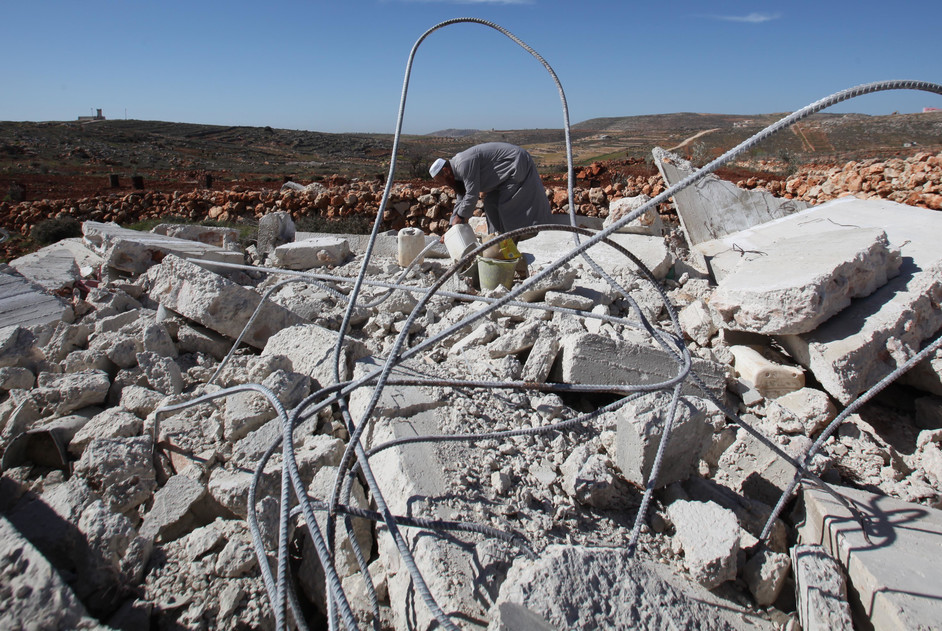 A Palestinian man inspects his property after Israeli forces demolished it in Qusra village, south of the West Bank city of Nablus, on 2 February. 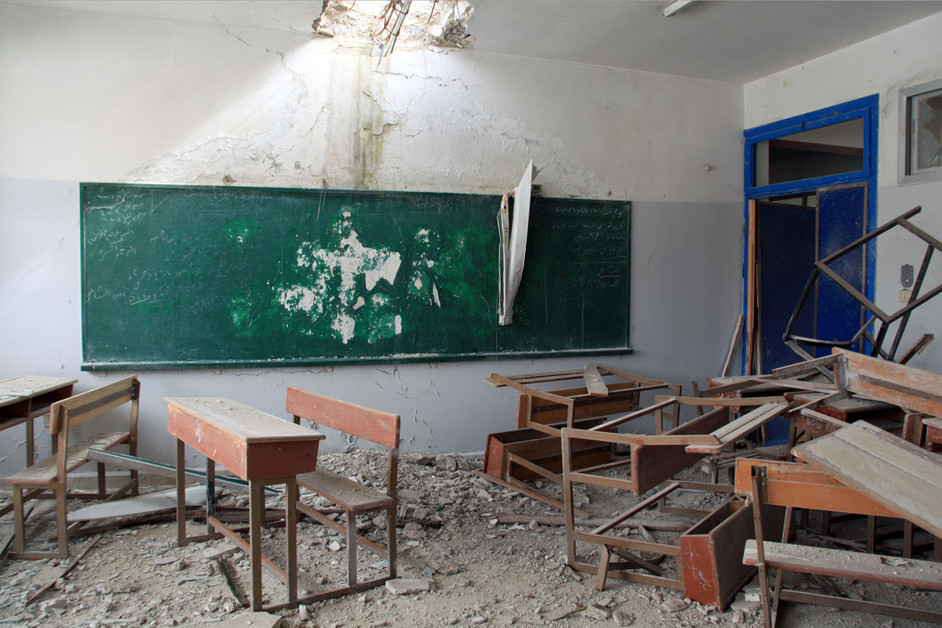 A damaged classroom in a United Nations-run school in Husseinieh, north of the Syrian capital of Damascus. UNRWA, the UN agency for Palestine refugees, said it accessed its facilities in Husseinieh, previously home to approximately 40,000 refugees, on 9 February for the first time since the area’s population fled intense fighting in the summer of 2013. The agency said in February that only 43 of its 118 schools in Syria were currently operational. 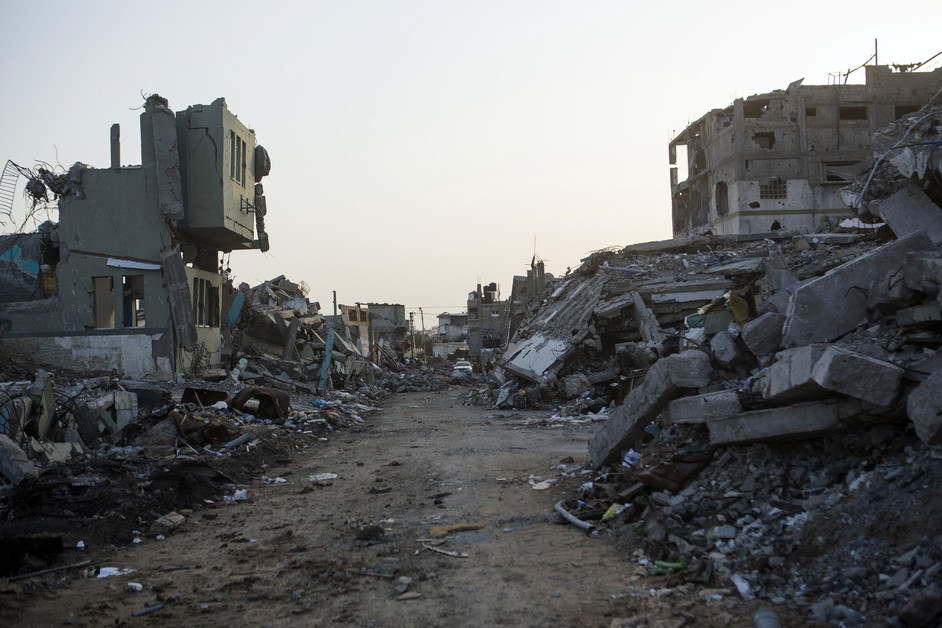 A destroyed street in the Tuffah neighboorhood of Gaza City on 9 February; at left, the former site of the al-Wafa hospital destroyed by Israeli forces last summer. 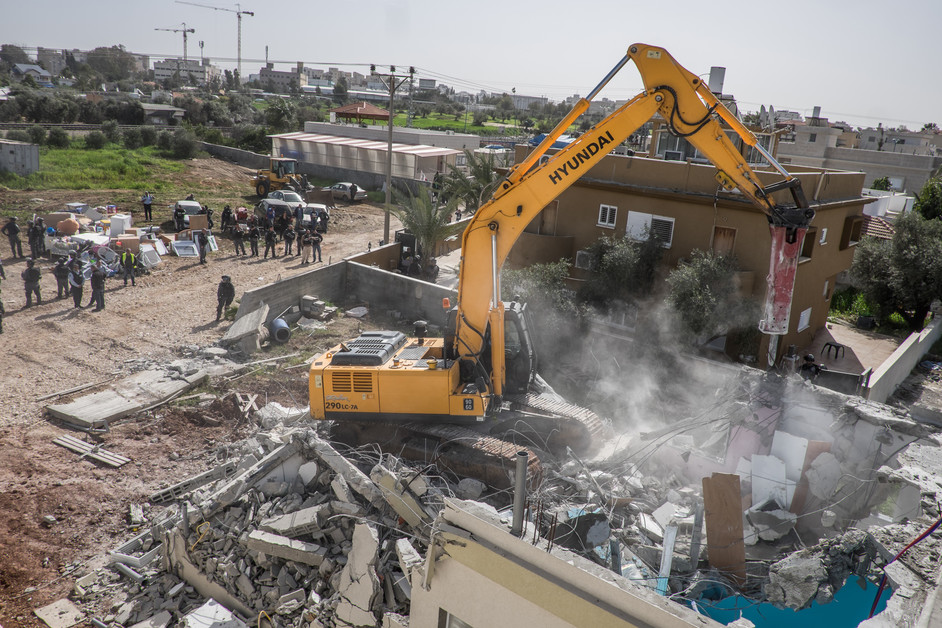 A bulldozer demolishes the home of Hana al-Naqib and her four children in the city of Lydd, in central present-day Israel, on 10 February. The house was built with the help of family members and neighburs who donated money to help the single mother. The house was built on family-owned land, but without permission from the Israeli authorities. Palestinian citizens of Israel face severe restrictions getting building permits because of legalized discrimination. 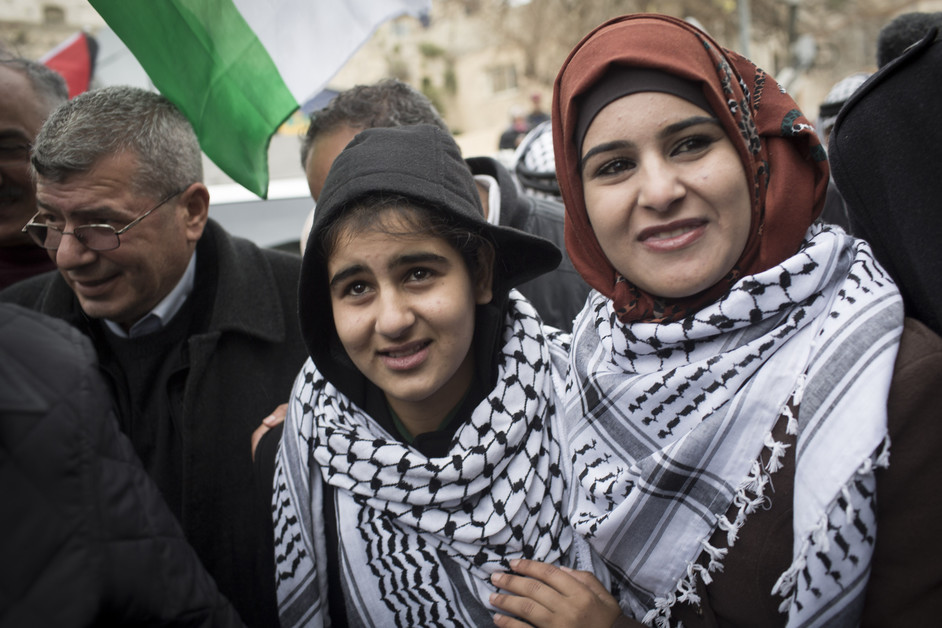 Malak al-Khatib (center), 14, is welcomed by family members as she arrives to Beitin village near the West Bank city of Ramallah after being released from an Israeli prison on 13 February. The girl was arrested on 31 December 2014 and held for two months for allegedly throwing stones at Israeli soldiers. 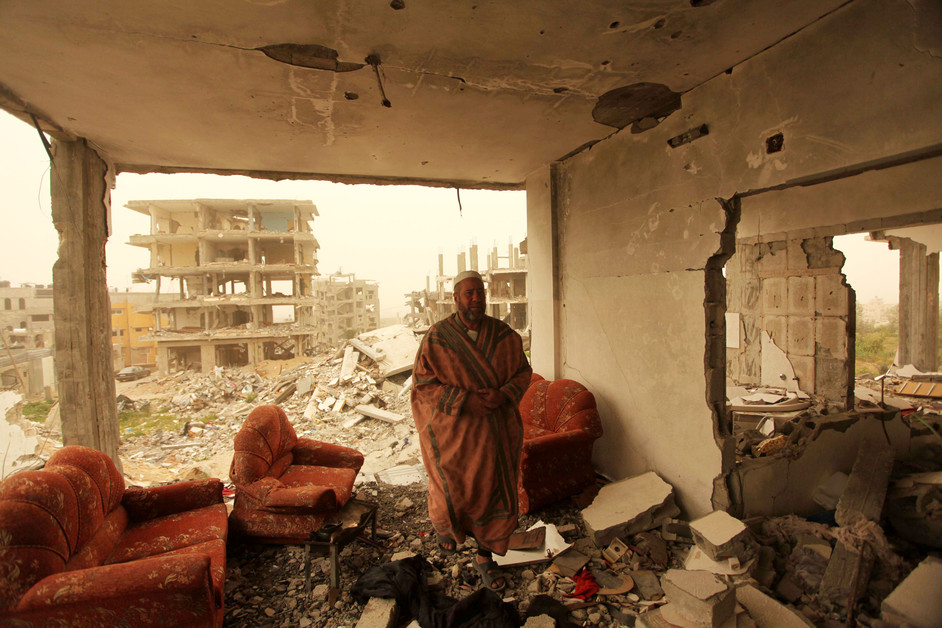 A Palestinian man walks on the rubble of his destroyed house in the Shujaiya district east of Gaza City during a sandstorm on 11 February. 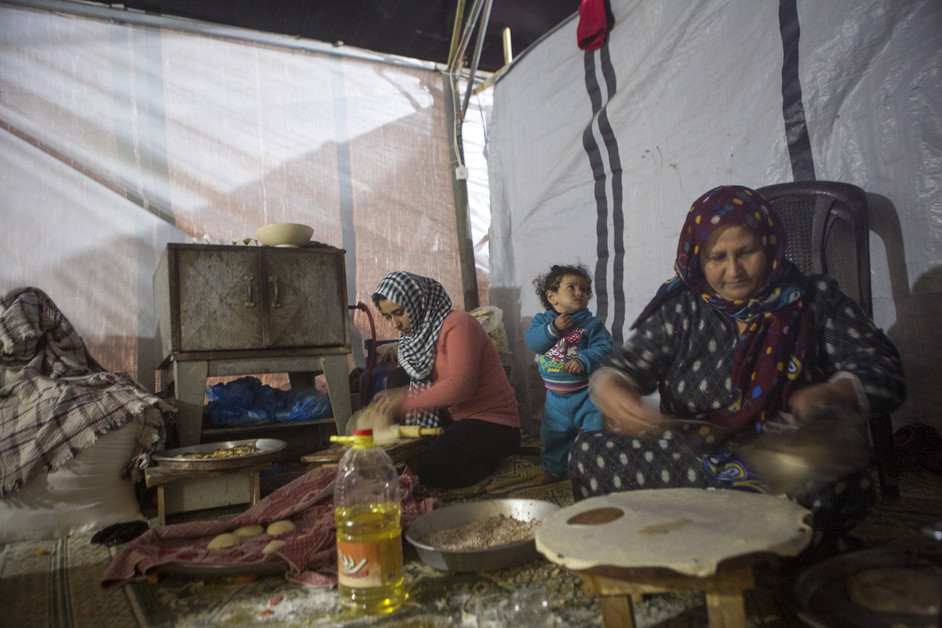 Palestinian women from the Shamali family prepare food in a tent they use a shelter in the Shujaiya quarter east of Gaza City on 11 February. Six months after the ceasefire that ended Israel’s summer offensive, tens of thousands of Palestinians like the Shamali family remain displaced. 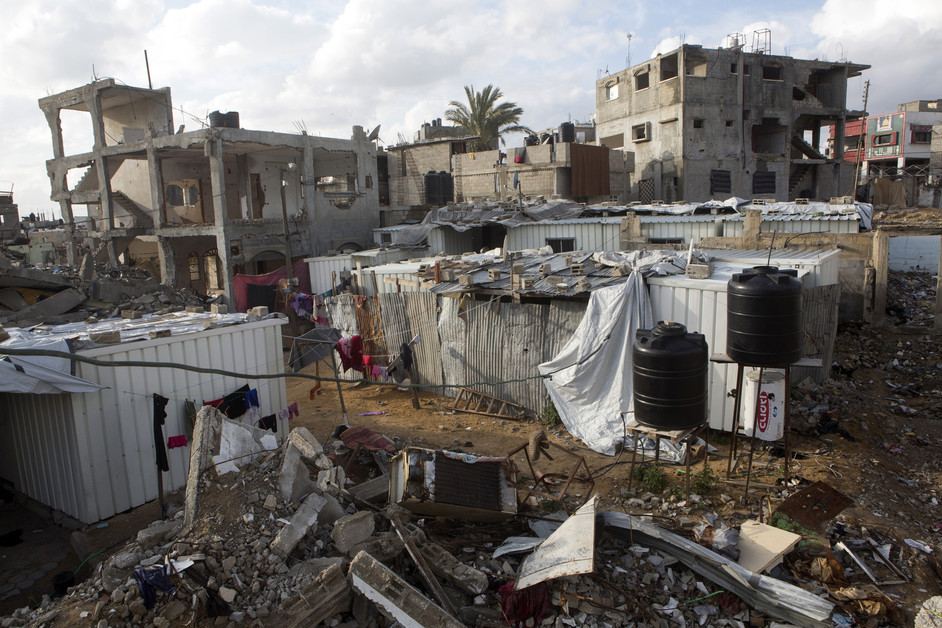 A view of metal containers distributed by nongovernmental organizations for temporary shelter for displaced Palestinians in the city of Beit Hanoun, 18 February. 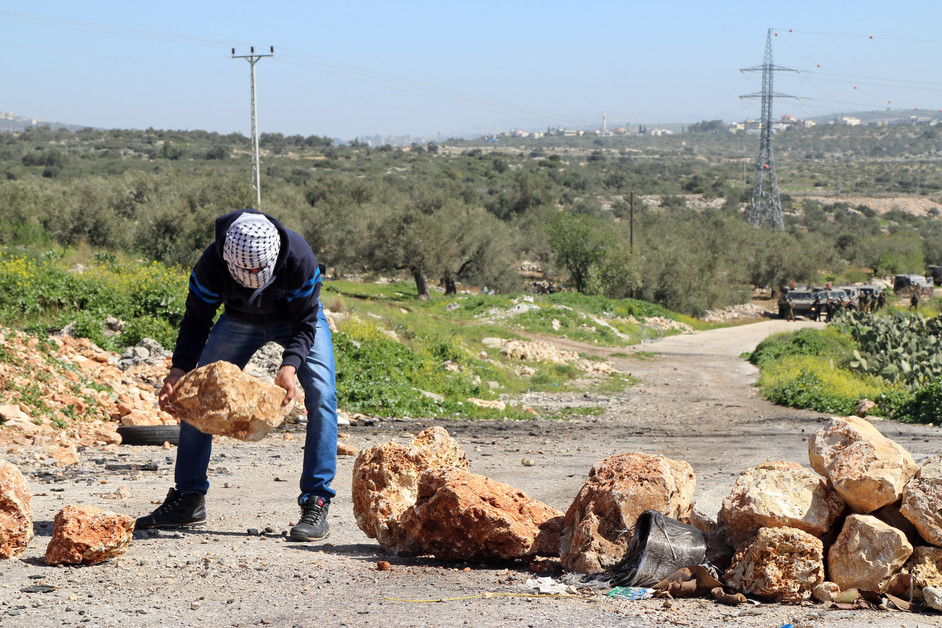 Palestinians in the northern West Bank village of Azzoun protest against the Israeli military’s decades-long closure of the village’s eastern gate to the city of Nablus at the request of the nearby Israeli settlement colony Karnei Shomron, 26 February. 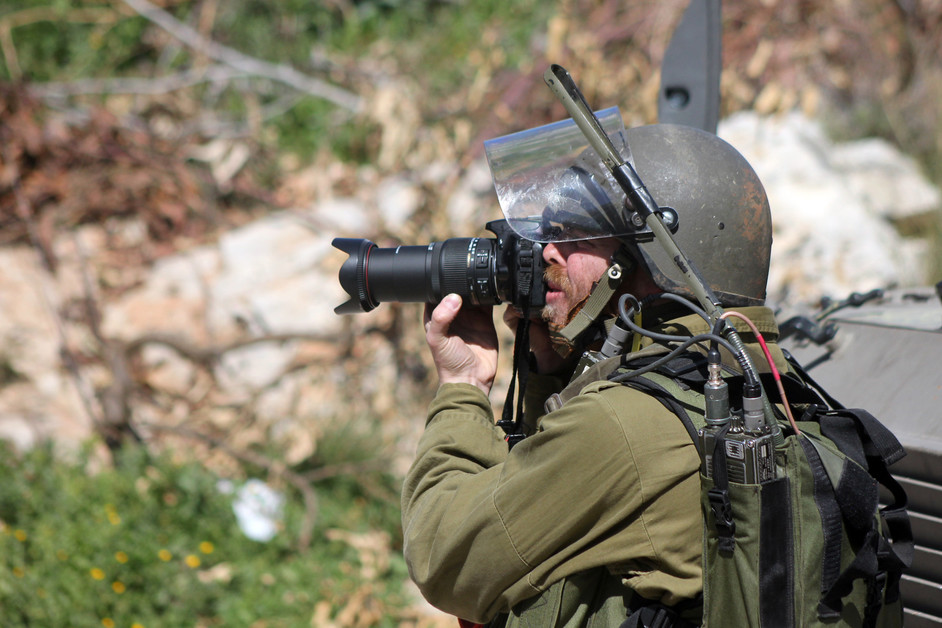 An Israeli soldier takes photographs of protesters’ faces during a protest in the northern West Bank village of Azzoun on 26 February. (Ahmad Al-Bazz / ActiveStills) 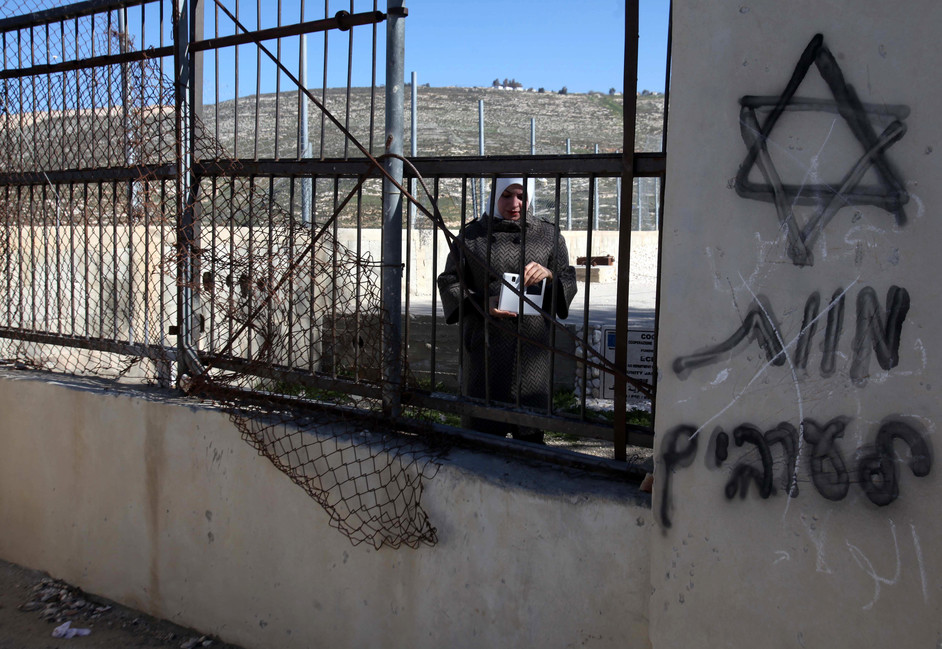 A Palestinian woman walks near Hebrew-language graffiti reading “death to Arabs” spray painted on the wall of a school in the village of Urif near the West Bank city of Nablus, 26 February. There were more than 300 incidents of settler violence against Palestinians and their property in the occupied West Bank in 2014, according to the UN monitoring group OCHA. 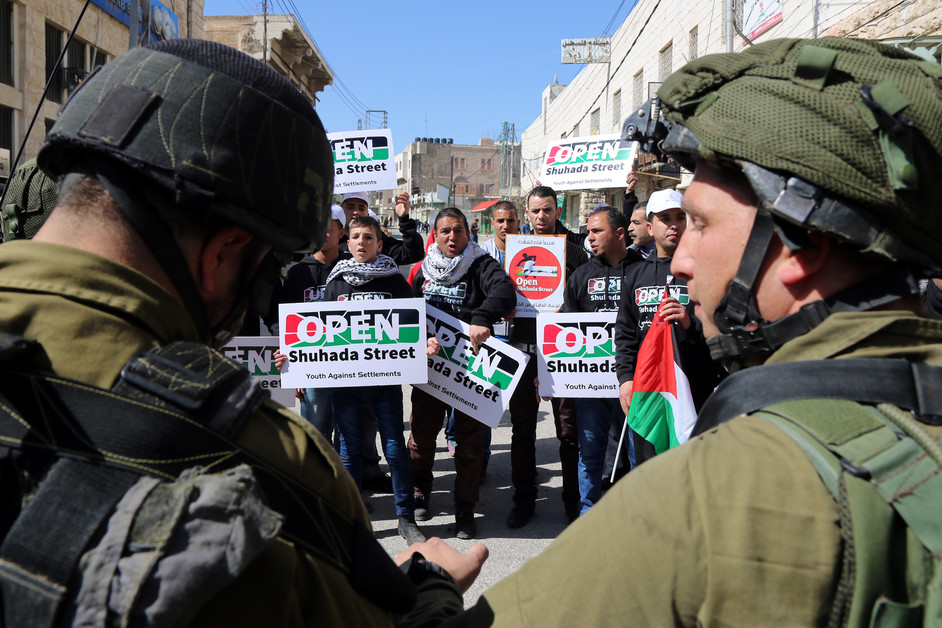 Palestinians protest against the closure of Shuhada Street in the West Bank city of Hebron on 27 February. Hundreds of Palestinians and internationals gathered to mark the 21st anniversary of the street’s closure by the Israeli army following the massacre of 29 Palestinian worshippers at the Ibrahimi mosque by an American-born Jewish settler. 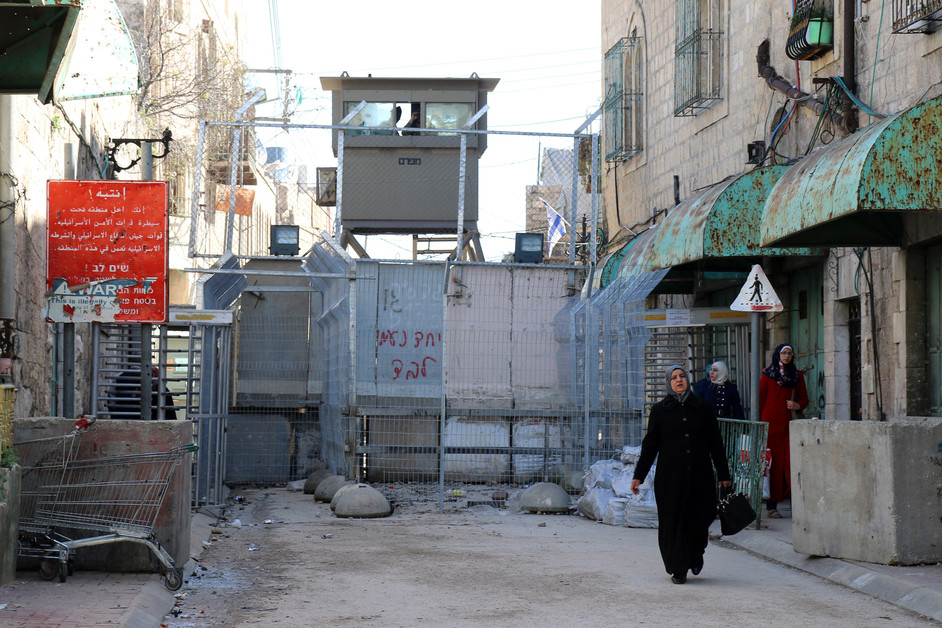 Palestinian women pass an Israeli checkpoint choking movement on Shuhada Street in the West Bank city of Hebron. The street was once the Old City’s thriving main thoroughfare before it was closed by the Israeli army in 1994. 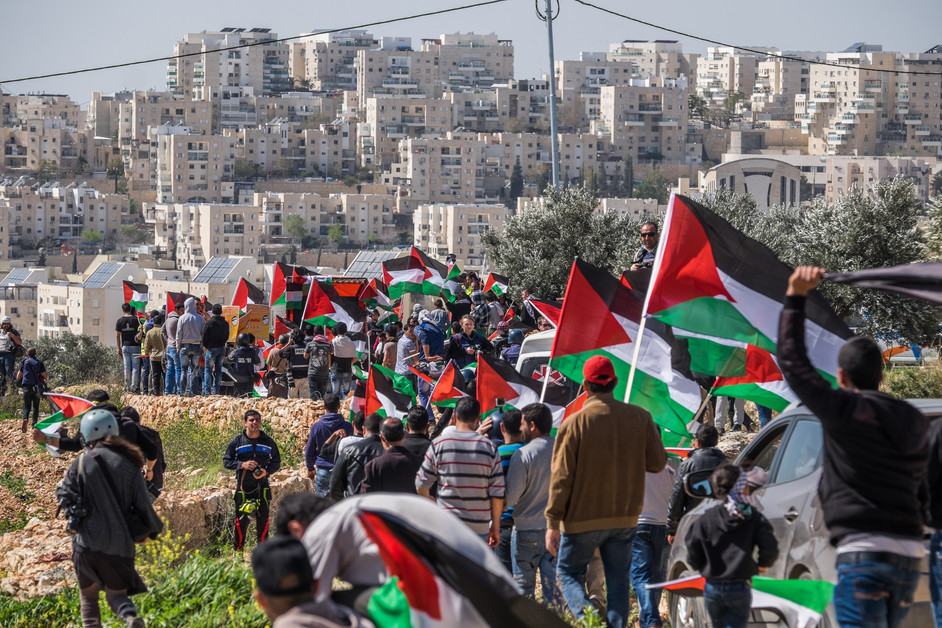 Palestinian, Israeli and international activists march during a protest marking ten years of popular struggle against Israel’s wall and settlements in the West Bank village of Bilin, 27 February.