The Islamic State and social media

NEW DELHI: Islamic State supporters floated their own social media site, Khelafabook, which they claimed was set up to allow the group and its followers to communicate with each other in the face of bans from social media sites like Facebook and Twitter.

However, just hours after it was discovered, the site -- www.5elafabook.com -- was not working. The amateur looking site, whilst it was functional, was littered with the Islamic State logo posted over its countries as its background. It seems to have been built using a platform called SocialKit, which anyone can download and use to make social networks of their own.

According to The Independent, the site was established by a man in the Iraqi city of Mosul — though he has registered his country as Islamic State — but is hosted in Egypt.

“May the peace, mercy and blessings of Allah be upon you. 5elafa book announces a temporary shutdown in order to protect the info and details of it’s members and their safety.5elafa book is an independent site and not sponsored by the Islamic state, we reiterate that the purpose of launching the site was to clarify to the whole world that we do not only carry guns and live in caves as they imagine, we do not live to kill and spell blood as the media portrays us, we are fighting the enemies of Allah’s religion, for Islam is a lifestyle which Allah deemed for his worshippers, we advance with our world and we want advancement to become Islamic, we rule the caliphate land with the Quran and we will rule the whole world by Allah’s permission, we have a universal vision where Muslims live in peace under the banner of Islam and the Rule of Sharia, we love to die as much as you love to live and we promise to fight until the last one of us, if we are to die then martyrdom is our path and the generations behind us will fight until victory or martyrdom. Islamic State remains and expanding by Allah’s permission to the whole world… Allah’s promise and he does not brake his promise, we have delivered the message… thanks for the media unwilling services, die in your anguish.” 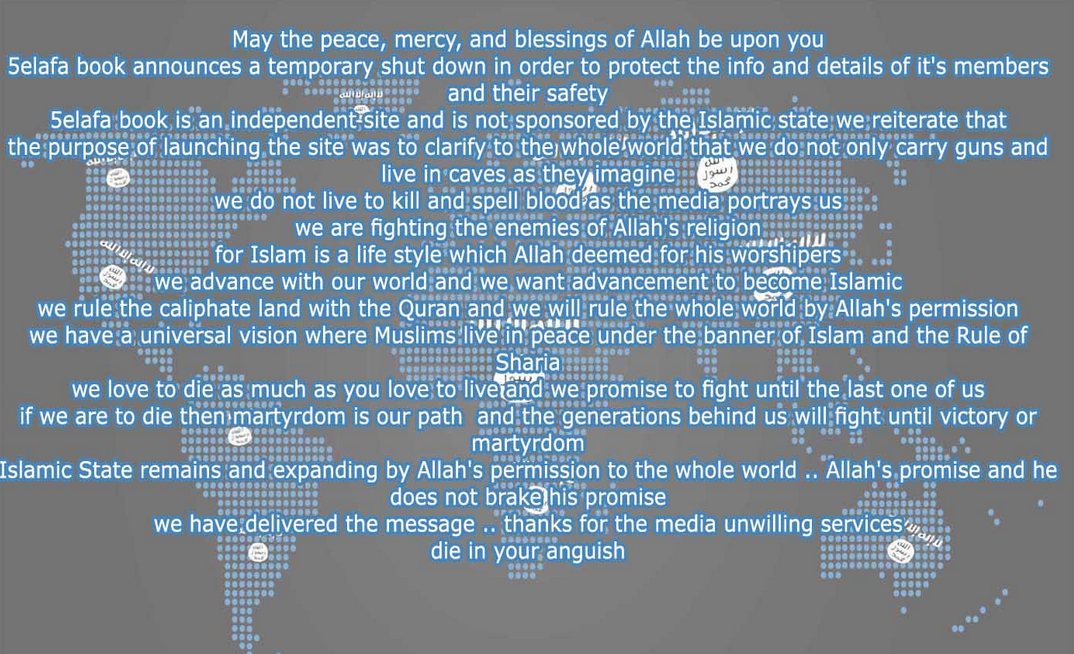 The Islamic State maintains an active social media presence, disseminating much of its propaganda -- including videos of beheadings of captives -- through the internet. Twitter, especially, has become a tool in spreading this propaganda, with the social media giant moving to suspend at least 90,000 accounts believed to be associated with the group, but unable to stop new accounts from constantly propping up.

In fact, a few weeks ago, Islamic State supporters called on militants across the world to attack Twitter employees, as retribution for the internet company’s efforts to block IS-related accounts.

“Your virtual war on us will cause a real war on you,” read an online post addressed to Twitter founder Jack Dorsey and shared by Islamic State supporters.

The post, whose authorship is unknown, was written in Arabic and included an image of Dorsey in the cross sights of a gun. 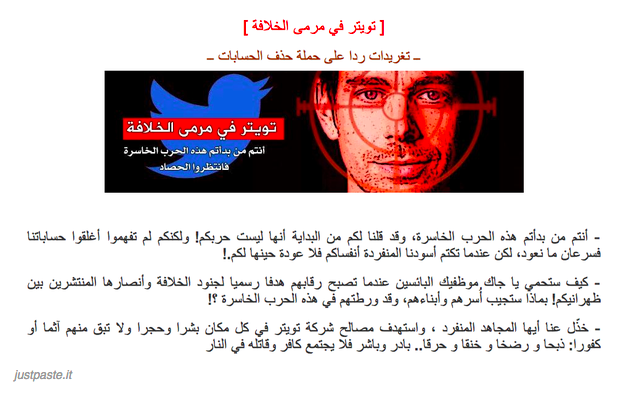 Included below are parts of the post, translated using Google Translate.

“You did you start from this failed war, has told you from the beginning that it is not your war! But you did not understand…”

“How to protect your employees Hey Jack helpless when their necks officially - become a target for the soldiers of the Caliphate and supporters scattered among your midst!”

“O Mujahid solo, and targeted the interests of Twitter Inc. everywhere human beings and not remain stone them or ungrateful sinner: slaughtered … and strangled and burned…”

“Virtual your war on us in the Internet will pull you real wars on earth! Is inevitable that it is only a matter of time, and perhaps some of your blood-thirsty black crusade has already started to move…”

Odd as it it may be, this was not the first time IS supporters threatened Twitter. In September last year, a Twitter account -- @dawlamoon -- related to the militant group began issuing the group’s first direct call for attacks -- not on politicians or policy makers, but on Twitter employees.

The account, in addition to calling for attacks, tweeted strategies for jihadists to circumvent action against their accounts. As Vocativ.com reported at the time, “the techniques [recommended were] simple but effective; opening new accounts by subtly changing names, usernames, passwords and pictures of suspended accounts, using numerals to replace letters and changing one character to create a similar username.”

The account was suspended shortly after, but Vocativ.com compiled the Tweets and their translation. These are as follows:

“#The_Concept_of_Lone_Wolf_Attacks The time has arrived to respond to Twitter’s management by directly attacking their employees and physically assassinating them!! Those who will carry this out are the sleepers cells of death.”

“#The_Concept_of_Lone_Wolf_Attacks Twitter management should know that if they do not stop their campaign in the virtual world, we will the bring the war to them in the real world on the ground.”

“#The_Concept_of_Lone_Wolf_Attacks Every Twitter employee in San Francisco in the United States should bear in mind and watch over himself because on his doorstep there might be a lone wolf assassin waiting.”

“#Attacking_Twitter_Employees is on the agenda of mujahedeen and lone wolves who are across Europe.”