Yemen in Crisis: I.S Moves in, U.S Moves Out

On the same day, Yemeni President Abd-Rabbu Mansour Hadi, accused the Houthi militia rebels of staging a coup against him and appealed to the UN for “urgent intervention.” Hadi issued the call from the southern city of Aden, where he fled last month after escaping house arrest by the Houthis. Following the call, the UN is expected to meet on Sunday to discuss the crisis.

Hadi’s appeal comes after Yemeni jet commanded by the Houthis fired missiles at a palace where Hadi was taking refuge in Aden on Thursday. On the same day, opposing Yemeni military forces -- those loyal to the Houthis, and those led by officers loyal to Hadi -- battled in Aden, killing at least 13 people and injuring 21.

At the time of writing, reports have emerged that the Houthis have taken over control of the airport in the southern city of Taiz, in the push toward Aden.

The United States, which considers Hadi to be the legitimate authority in Yemen, immediately condemned the attacks. “This unconscionable attack on Muslim worshipers during Friday prayers only further highlights the depth of the terrorists' depravity and the threat they pose to the people of Yemen, the region, and the world," read the statement issued by the US government. "Today's attacks underscore that terrorism affects all Yemenis and that Yemen and its people must remain unified to confront these challenges."

The crisis has escalated to unprecedented proportion in the few months since September last year, when a confident US President Barack Obama touted the partnership with Yemen as a model in counter-terrorism. The Houthis, after taking over Yemen’s capital Sanaa, in September have now gone on to seize nine of the country's 21 provinces. Since then, violence in the troubled country has increased with rival militias including Houthi rebels, al-Qaeda and most recently the Islamic State, pitted against each other.

On Friday, suicide bombers attacked two mosques linked to the Shiite Houthis, killing 137 and injuring 350 people. A group claiming to be a Yemeni branch of the Islamic State said it was responsible for the bombings. 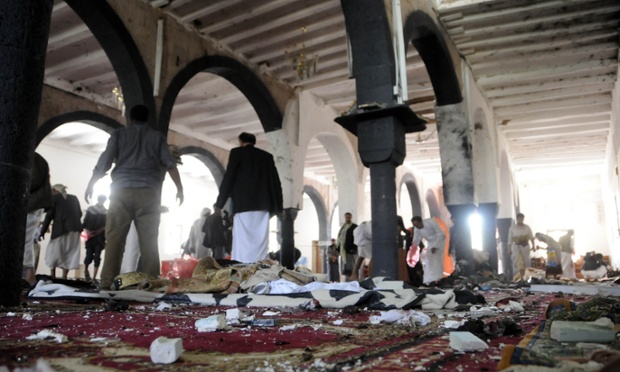 (The attack, claimed by the Islamic State, killed 137 people. Image credit: The Guardian)

If the Islamic State did indeed carry out the attack, it would be an indication of the group’s expansion into conflict-ridden Yemen, adding a new challenge to the Houthis and the Al Qaeda in the Arabian Peninsula.

It would also mark the Islamic State’s resolve to expand out of the group’s stronghold in Syria and Iraq, and add to the regional dynamics of the conflict in Yemen, where Shia militants have the backing of Iran and Sunni militants that of Saudi Arabia.

Further, the attack is the second major attack carried out by the group outside of Syria and Iraq within a span of a week. On Wednesday, an attack on tourists at the Bardo Museum in Tunis, Tunisia, killed 23 people and was claimed by the Islamic State.

It also follows news of the group’s expansion into Libya, after the group released a brutal video showing the execution of 21 Egyptian Coptic Christians in the country last month. The beheading followed an attack on the luxurious Corinthia hotel in central Tripoli that killed nine people three weeks earlier that was claimed by the Islamic State. The militant group have also claimed other attacks -- including a series of attacks targeting empty embassies and local security buildings in Tripoli.

The Islamic State’s expansion into Yemen and Libya, particularly, is a worrying development as it may provide an insight into a model of expansion of the militant group -- one that is based on taking advantage of political contexts characterised by infighting and paralysed governments.