NEW DELHI: Hacker group Anonymous launched its latest attack on Israel, saying that the action was in response to the country’s various crimes in Palestine. Messages issued by the group stated that it would be carrying out an “electronic holocaust” as part of its #OpIsrael campaign -- which the group carries out every year on April 7.

Twitter accounts associated with the group stated that over 150,000 pieces of personal information related to Israeli citizens had been leaked.The group also uploaded an article about the achievement, and linked to that cache of documents. 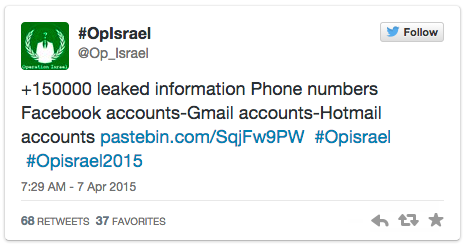 The group posted the following video prior to the attacks on April 7.

“Greetings World, We Are Anonymous, This is a message to the foolish Zionist entities, We are coming back to punish you again, for your crimes in the Palestinian territories, as we do every year on 7 April, All we see is continuous aggression, bombing, killing and kidnapping of the Palestinian people, as in the last war against Gaza in 2014.

We also see complete silence from other Arab, and foreign countries, Although this is nothing new to us, we refuse to stand by idly. Our response to these heinous crimes against humanity, will be on 7 April 2015. As we did many times, we'll take down your servers, government websites, Israeli military websites, banks, and public institutions. We'll erase you from cyber space as we have every year, 7 April 2015, will be an electronic holocaust, a message to the youth of Palestine, YOU are a symbol of freedom, resistance, and hope, Never give up, never give in, NEVER! We are with you, and will continue to defend you.

Our message to the foolish Benjamin Netanyahu, and all leaders in the Zionist entities, As promised in previous attacks, we will continue to electronically attack until the people of Palestine are free, As shown in previous attacks, we will continue to invade and attack your devices, websites and personal data, To the government of Israel, You have NOT stopped your endless human right violations. You have NOT stopped illegal settlements.

You killed thousand people as in the last war against Gaza in 2014 . You have shown that you do NOT respect international law. This is why that on April 7 2015, elite cyber-squadrons, from around the world, will decide to unite in solidarity, with the Palestinian people, against Israel, as one entity to disrupt and erase Israel from cyberspace. To the government of Israel, we always say expect us but you always fail we are unexpected we'll show you on 7 april 2015 what the electronic holocaust mean...

The attack has received its share of criticism, given the use of the phrase “electronic holocaust” and the timing -- in the week before Holocaust Remembrance. 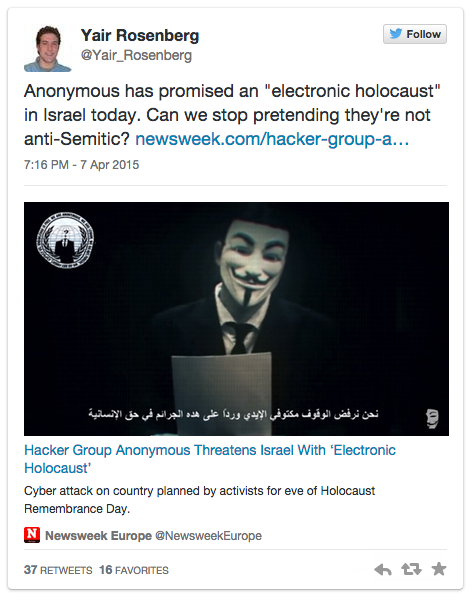 However, this is not the first time the group has targeted Israel. In July 2014, the group launched “Operation Save Gaza” that coincided with Israel’s Operation Protective Edge -- an attack on Gaza that killed over 2000 people. Anonymous claimed to take down “thousands” of Israeli sites including Israel’s Defence Ministry and the Tel Aviv Police websites, with the efforts escalating following the death of Anonymous member Tayeb Abu Shehada, who was killed during a protest in the West Bank by Israeli forces.

“We've been fighting Israel and their terrorist state for over four years, and we have not grown weary or tired. It has only made us stronger. Therefore, we are calling upon the Anonymous collective, and the elite hacker groups to join our crusade, and to wage cyber war against the state of Israel once more,” said a public statement posted by the group.

As news broke that hundreds of “Israeli government home pages have been replaced by graphics, slogans, and auto-playing audio files,” Anonymous claimed responsibility for the attacks, further releasing 170 log-in details that they claimed belong to Israeli officials.

A year earlier in 2012, the launched attacks that wiped out the Israeli Foreign Ministry’s data, leaked 5000 officials’ data, and hacked the Israeli Deputy Premier’s Facebook and Twitter accounts to post pro-Palestinian messages.

In April 2013, Anonymous claimed to have attacked 100,000 websites, stating that their attacks had caused $3 billion in damages to Israel.

The claim may be an exaggeration, as pointed out by Yitzhak Ben Yisrael, of Israel's National Cyber Bureau, who stated that the attacks had caused “little real damage.” Anonymous doesn't have the skills to damage the country's vital infrastructure. And if that was its intention, then it wouldn't have announced the attack ahead of time. It wants to create noise in the media about issues that are close to its heart," Yisrael said.

The state of Israel has not been Anonymous’ only enemy, with the group first becoming associated with what has been termed “hackivism” through an attack on the Church of Scientology in 2008. In 2010, they took on Indian internet software company Aiplex Software, which was contracted by studios to launch DDoS attacks on websites providing pirated content. The attack then moved on to targeting the Recording Industry Association of America and the Motion Picture Association of America, successfully bringing down both websites.

“Anonymous is tired of corporate interests controlling the internet and silencing the people’s rights to spread information, but more importantly, the right to SHARE with one another. The RIAA and the MPAA feign to aid the artists and their cause; yet they do no such thing. In their eyes is not hope, only dollar signs. Anonymous will not stand this any longer,” said a statement associated with the operation that came to be known “Operation Payback Is a Bitch.”

Operation Payback continued targeting a host of entities, including the US Copyright Office and the Australian Federation Against Copyright Theft.

The group has been politically active, launching “Operation Tunisia” in support of the Arab spring movements and playing an active role in the Occupy Wall Street Movement, attacking the New York Stock Exchange and the London Stock Exchange. The group has also targeted outfits associated with a homophobic stand and websites hosting child pornography.