Win-Win for Al Qaeda in Yemen

NEW DELHI: The costs of the war in Yemen are apparent for the US and Saudi-supported incumbent President Abdu Rabu Mansour Hadi and the Houthi rebels who are allegedly backed by Iran. As the country is torn apart by fighting factions, there is one unlikely winner: the Al Qaeda group.

The Al Qaeda’s branch in Yemen consolidated power in the country’s south on Thursday, taking control of a major airport known as Riyan Airport Dhabah oil terminal and the area's main military base, and entering into an alliance with local tribal leaders to administer the region. Just two weeks earlier, the group -- known as Al Qaeda in the Arabian Peninsula (AQAP) -- seized the nearby city of Al Mukalla and emptied its bank and prison.

The gains are directly linked to the conflict in Yemen, which has become the battlefield for the region’s powers. While Saudi Arabia has openly thrown its weight behind Hadi, initiating airstrikes targeting Houthi rebels on March 26, Iran has denied any role in the crisis. Referring to allegations against Iran, the country’s foreign ministry spokesperson Marzieh Afkham said "It is noteworthy that such remarks are made despite the ongoing meddling and moves by some regional countries in Yemen contrary to the country's interests and security," adding that "the falsity of these claims is quite clear.”

Hadi, meanwhile, has denounced the rebels as Iran’s “puppet.” "I say to the puppet of Iran, and those who are with him, you destroyed Yemen with your immature politics, and creating internal and regional crisis," Hadi declared.

The Shia country has proposed a four-step solution to ending the crisis, involving a ceasefire, delivery of humanitarian assistance, a national dialogue and the formation of a broad-based government. "The people of Yemen should not have to face aerial bombardment," Iran’s foreign minister Javad Zarif said whilst in Pakistan. 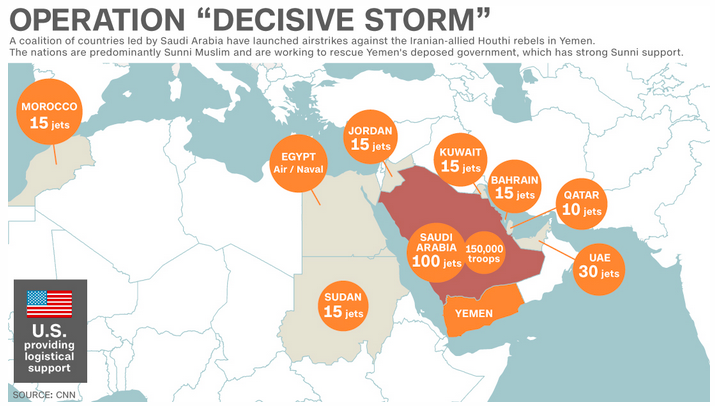 The AQAP, in the meanwhile, has benefitted as all its adversaries in the region are distracted by the fighting organised alongside the power-blocs. As the Saudi-led airstrikes continue to bombard Houthi targets, AQAP militants are forming ties with tribal leaders in ways the group has never enjoyed before. “For the first time, Al Qaeda is building a strategic alliance with the tribes,” said Jamal Benomar, the United Nations diplomat who had unsuccessfully sought to achieve a political reconciliation in Yemen, in a statement to the New York Times. “It is a strengthened and dangerous Al Qaeda. This is what worries everybody.”

The position was echoed by the US, with Defense Secretary Ashton B. Carter, in a news conference, describing the gains by AQAP as “of serious concern.” “It’s obvious that it’s easier to do our counterterror operations when there’s a settled government” in Yemen, he said. “In the meantime, we need to, and do, protect ourselves against AQAP. Because they are dangerous.”

Along with the AQAP there is another group gaining ground. The new kid on the block in Yemen -- the Islamic State -- is slowly but surely making its presence felt. The setting in Yemen is now perfect for the Islamic State. Conflict organized along sectarian Shia-Sunni divisions, a powerful Saudi-led US-backed coalition bombing the key Shia rebel militia, the Houthis, thereby paving the way for Sunni militias like the AQAP and the Islamic State.

Earlier in March, the Islamic State carried out its first major attack within Yemen. Suicide bombers attacked two mosques linked to the Shiite Houthis, killing 137 and injuring 350 people. A group claiming to be a Yemeni branch of the Islamic State said it was responsible for the bombings.

In addition to becoming the regional battlefield, the conflict in Yemen is also symbolic of the United State’s confused policy regarding the middle east. In Yemen, the US is supporting Sunni rebels, whereas in Iraq and Syria, it is fighting Sunni rebels.