The latest video is 29 minutes long and bears the the official logo of the media arm of the Islamic State, although its authenticity has not been independently verified. It shows a group of men -- believed to be members of the Ethiopian Church seized in Libya by IS-linked militants -- beheaded on a beach and another group being shot in the head in a desert.

The video has drawn international condemnation, with Ethiopia referring to the killings as a crime against humanity. The United States also condemned the "brutal mass murder.”

As evinced by the video, the Islamic State seems to be making inroads into Libya -- a country torn by conflict. Last week, the group claimed an attack on the Moroccan embassy in Tripoli, Libya’s capital city and an attack in which two people were killed outside the South Korean embassy.

The Islamic State’s presence in Libya first shot to international headlines with the video showing the execution of 21 Egyptian Coptic Christians. The video was released by the Islamic State’s media arm and was carried out by militants who say they are associated with the Tripoli Province of Islamic State -- a Libyan group that pledged allegiance to IS last year.

The beheading followed an attack on the luxurious Corinthia hotel in central Tripoli that killed nine people three weeks earlier that was claimed by the Islamic State. The militant group have also claimed other attacks -- including a series of attacks targeting empty embassies and local security buildings in Tripoli.

Nevertheless, the string of attacks have changed the already fraught political landscape. The execution of Egyptian Christians drew a response from Egypt in the form of bombings targetting Islamic State camps, training sites and weapons storage areas in Libya. This response could escalate Egypt’s role in Libya. In a nationally televised speech, Egyptian President Abdel Fattah Al Sisi said, “ Egypt “reserves the right to respond in the way and timing it sees fit for retribution from these killers.” Al Sisi has also previously said that Libya’s internal struggle poses a security risk to Egypt, and has thrown his political support behind Libya’s internationally recognized government, which has unsuccessfully tried to overthrow a rival Islamist government that controls the capital, Tripoli. 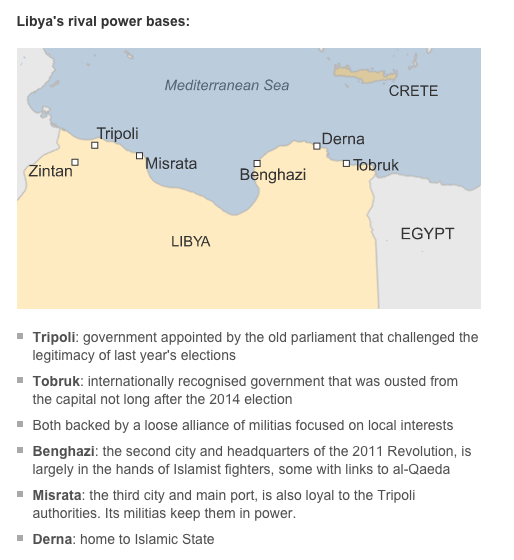