NEW DELHI: The Saudi-led coalition that has been bombing Houthi rebels in conflict torn Yemen for the last month has announced the end of its military operation. Operation "Decisive Storm" which began on March 26, has been replaced by a new campaign aimed at protecting civilians and preventing Houthi fighters from operating.

Brigadier-General Ahmed al-Asiri, the coalition's spokesperson made the announcement on Tuesday. Stating that the coalition had achieved its targets in Yemen, the General said that a new operation called "Renewal of Hope" was being initiated and came into effect at midnight local time. "The coalition has completed the 'Decisive Storm' campaign at the request of the Yemeni government and the president of Yemen," Asiri said… The primary goals of the campaign have been achieved and sovereignty has been protected… We are able to confirm that the Houthis are no longer a threat to Yemenis or neighbouring countries,” Asiri said.

Yemen's Saudi and US-backed President Abd-Rabbu Mansour Hadi made a televised speech early Wednesday from Riyadh, where he thanked the coalition for its support. "I extend on my behalf and on behalf of the Yemeni people sincere thanks and appreciation for the Arab and Muslim brothers and our partners in the coalition for supporting legitimacy," he said.

Houthi leaders seem to have welcomed the move, telling Reuters news agency that a political deal to end the conflict had almost been reached. At the time of writing, there is no clarity on whether any deal has been reached or even initiated. Further, there is also no evidence that the Houthis had retreated from any of the territories they had captured in the preceding weeks, including the important city of Sanaa and parts of Aden.

The change in policy on the part of Saudi Arabia -- which seemed to be poised to launch a ground offensive against the rebels in Yemen -- is likely the result of some sort of agreement reached between the Saudis, Iran and other key players in the region.

Iran -- believed to be backing the Houthis -- called for "urgent humanitarian assistance" in Yemen after the Saudis announced the end of their military offensive. Mohammad Javad Zarif, the Iranian Foreign Minister, described the Saudi move as “positive” and called for talks to pave the way for a new government. "Positive developments in Yemen should be followed by urgent humanitarian assistance, intra-Yemeni dialogue and broad-based govt. Ready to help,” Zarif tweeted. 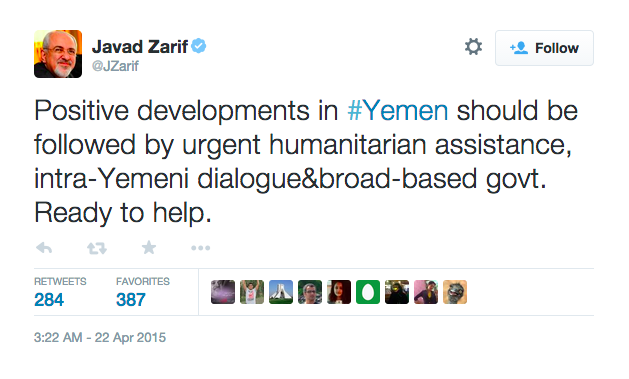 Iran’s Foreign Ministry has also issued a statement welcoming the announcement. "Before this, we said the crisis in Yemen had no military solution, and... a halt to killing innocent and defenceless people is absolutely a step forward," a FM spokeswoman said according to the semi-official Isna news agency.

The Saudi move has been positively received the world over. The US issued a statement saying: "We continue to support the resumption of a UN-facilitated political process and the facilitation of humanitarian assistance," National Security Council spokesman Alistair Baskey said.

Pakistan, which was caught between a rock and a hard place over its relationship with Saudi Arabia and hesitance in joining a military offensive, perhaps breathed a big sigh of relief. “This will pave the way for a political solution of the crisis in Yemen,” Foreign Office spokeswoman Tasnim Aslam said in a statement, adding that Pakistan shared Saudi Arabia’s desire for a “peaceful settlement of the crisis.”

The biggest sigh of relief, however, directly concerns the people of Yemen, with the World Health Organisation estimating that 944 people were reported killed and 3,487 wounded in the four weeks up to Friday. Problems relating to health care, water shortages, and other humanitarian crises compounded the crisis.

In fact, the impact of the strikes on civilians in Yemen -- which crippled the already poor, struggling country -- were a key factor contributing to international pressure on Saudi Arabia to halt the bombings.