NEW DELHI: According to unconfirmed reports, Islamic State militants have devised a new strategy to trap victims accused of homosexuality. As the group released images of pictures purporting to show two allegedly homosexual men being embraced by militants before they were stoned to death in public, a report suggests that this is a deliberate ploy.

A report in the Daily Beast notes that jihadists posing as gay men “in order to entrap homosexuals, a not uncommon practice in war-torn Syria.”

Quoted in The Independent, Abu Mohammed Hussam, an activist with the Syrian group Raqqa is Being Slaughtered Silently (RBSS), however, said the embrace was used by militants to demonstrate that by killing the men, they are paving the way for God to forgive them for their ‘sins’.

“Isis has never forgiven one person,” he said. “They kill people and then say when God will forgive. They hug the men to show the people who are watching that Isis is not at fault." 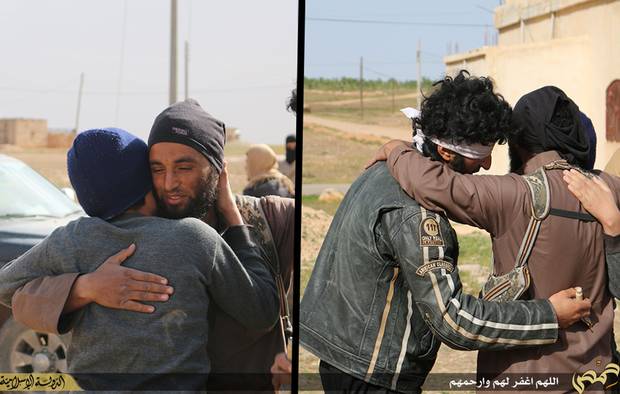 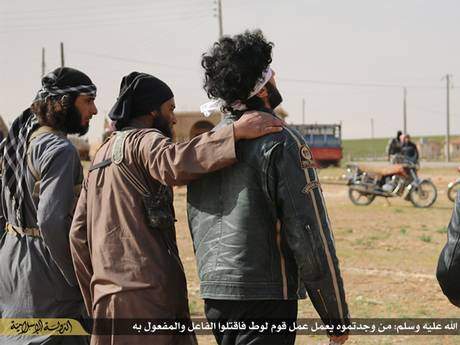 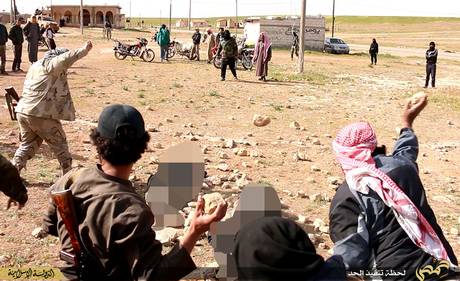 The militant group became notorious for its position on homosexuality, when graphic images and videos surfaced purportedly showing Islamic State militants throwing gays from the roof of a building in Raqqa. One of the images showed a blindfolded man sitting on a plastic chair, surrounded by two militants clad in black. Another image appeared to show the man falling from a building. Yet another image showed the man’s body on the ground, with a crowd gathered around, and stones being pelted. 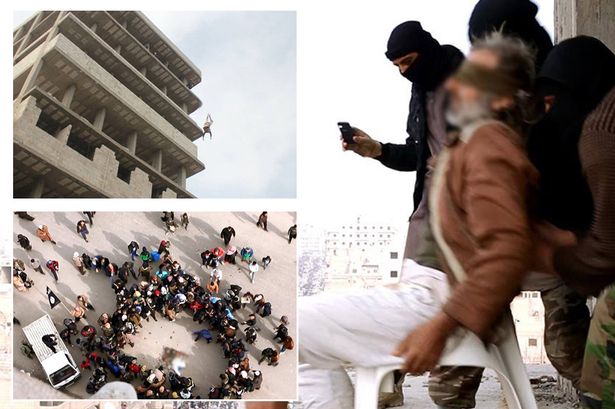 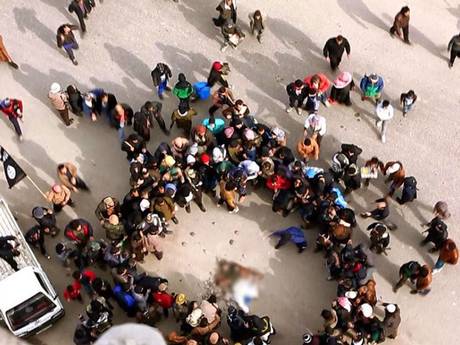 (The images above appears to suggest that the man was stoned to death after being thrown off the building).

The militants allegedly read out a “judgement” before carrying out the sentence -- that specifically called for the man to be thrown off the highest point in the city for being gay.

The group seems to have used this brutal execution method on numerous occasions as a punishment for homosexuality. A few weeks before this incident, in a spate of online activity, images appeared that seemed to show Islamic State militants throwing men accused of being gay off towers, stoning a woman accused of adultery and crucifying at least 17 young men in a 48-hour period.

The images were attributed to to the “Information Office of the mandate of Nineveh”, a city in Iraq and claimed to show Islamic State militants carrying out “hudud” -- the system of fixed punishments for what the group’s courts regard as serious crimes. 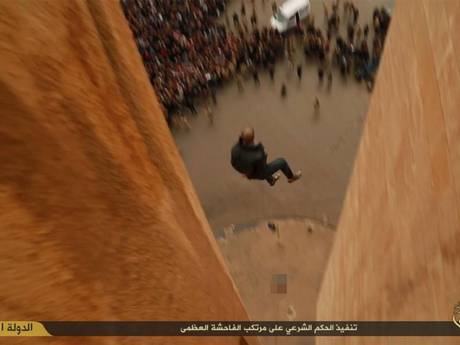 (An earlier image that appeared to show men being pushed off, as a large crowd controlled by militants watches on from below).

According to a translation by the Middle East Media Research Institute, the acts listed and their respective punishments are:

Blasphemy against Allah: Death
Blasphemy against the Prophet Mohamed: Death – even if the accuser repents
Blasphemy against Islam: Death
Adultery: Stoning until death in case the adulterer was married and 100 lashes and exile if he or she were unmarried.
Sodomy (homosexuality): Death for the person committing the act, as well as for the one receiving it.
Theft: Cutting off the hand
Drinking alcohol: 80 lashes
Slandering: 80 lashes
Spying for the unbelievers: Death
Apostasy: Death
Banditry:
1: Murder and stealing: Death and crucifixion
2: Murder only: Death
3: Stealing (as part of banditry): Cutting off the right hand and the left leg
4: Terrorizing people: Exile