From the Archives: Che in India

Ernesto Che Guevara, a revolutionary who has continued to inspire generations, came across the oceans to India in 1959. A dream destination after she won independence from the British, India clearly fascinated this Marxist revolutionary who came for a first hand study of Indian peasantry and agriculture. That was his focus, and it is strange that many who still revere him here have little idea about the visit. Many do not even know that Che, the enigmatic, romantic revolutionary was in India.

The one article that recorded the visit with considerable research and insight was of senior journalist, editor of Jansatta, Om Thanvi in 2007. Excerpts from the article that first appeared in Himal South Asia: “Che left Havana on 12 June 1959. He celebrated his 31st birthday in Madrid, and flew to Delhi via Cairo. His plane reached Palam on the night of 30 June. Since Che had no official position in the Cuban government, this “national leader of Cuba”, as he was described in official communications, was received at the airport by a welcoming committee of one, Deputy Chief Protocol Officer D S Khosla, who later accompanied him to the newly built Hotel Ashok in Chanakyapuri.

The Cuban delegation accompanying Che was likewise small: a mathematician, an economist, a party worker, a captain of the rebel army, and a single bodyguard. Pardo Llada, a rightwing broadcaster, also joined the delegation in Delhi. Though Llada was ostensibly sent to assist Che, it is rumoured that Castro wanted some respite from his popular daily radio programme in Havana. In any case, Che was not happy to have him, and Llada ended up returning home midway through the trip.” 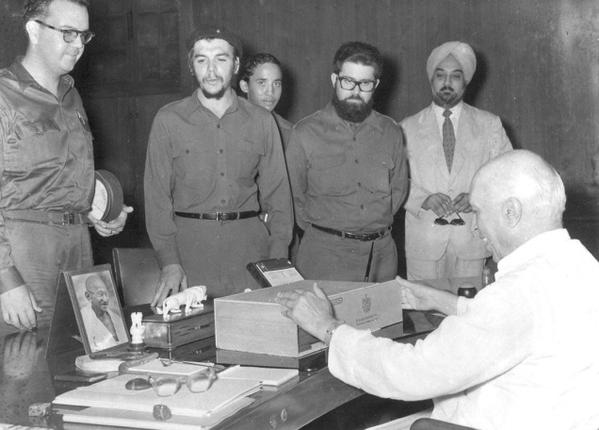 Che Guevara and his delegation with Jawaharlal Nehru

“On his first morning in Delhi, Che met Nehru in Teen Murti Bhawan, the prime minister’s residence. Nehru had a soft spot for socialist countries, and Che clearly admired the Indian leader. “Nehru received us with an amiable familiarity of a patriarchal grandfather,” Che wrote in his report, “but with noble interest in the dedication and struggles of the Cuban people, commending our extraordinary valiance and showing unconditional sympathy towards our cause.”

“Formal talks took place before lunch, and Che explained that Cuba wanted to establish diplomatic and trade relations with India. Though Cuba did have a consulate in Calcutta, India had no diplomatic set-up in Cuba, with the Indian ambassador in Washington instead attending to Indian affairs in Cuba. The two delegations agreed to establish diplomatic missions as soon as possible, and post-lunch plans were made for the Cuban delegation to meet with Indian trade officials.”

“The next day, Che visited a community development project in Pilana, near Delhi, meeting with farmers and viewing a school. Later that day, he met with Minister for Community Development and Cooperation S K Dey. On the fourth day, he met Minister for Food and Agriculture A P Jain, as well as additional bureaucrats within the commerce and industry ministries. During this meeting, Che listed the products that Cuba was hoping to import from India – including coal, cotton textiles, jute goods, edible oils, tea, film and trainer aircrafts – and what it wanted to export, including copper, rayon cords for tyres, cocoa and, most importantly, sugar. His comments on the meeting suggest just how astute he had become about the principles of international trade in such a short period of time: “With the Secretary of Commerce we held a cordial meeting that prepared the ground for future trade negotiations. This can be of great importance. As the standard of living of three hundred eighty million Indians improves, their need for sugar will grow and we will be able to acquire a new and valuable market.” Indeed, Castro once said that whatever work this gun-loving doctor was assigned, he would soon become an expert at it.” 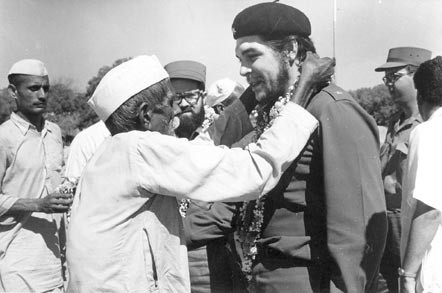 “On 5 July, Che and his delegation left Delhi for other parts of India. Through the records of Cuba’s Radio Rebelde, we know that they may have seen Lucknow’s Institute of Sugar Investigation, though no other sources confirm this visit. What can be corroborated is that the delegation was in Calcutta on 10 July, as an English-language daily published a photograph of Che’s visit to a factory in Agarpada. A senior officer from Calcutta told me that Che also met with B C Roy, then Chief Minister of West Bengal. Shockingly, the Calcutta communists – at a time when the Communist Party of India had not yet split – completely ignored the presence of this great leader of the Cuban revolution.”

The photographs below are from the photo archives of the Government of India. ‘ 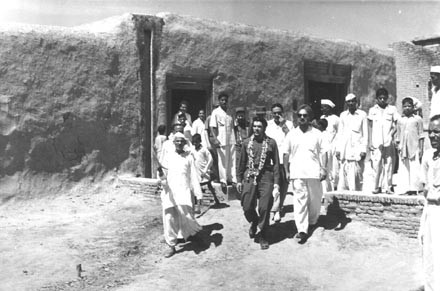 Che visiting a village in Haryana 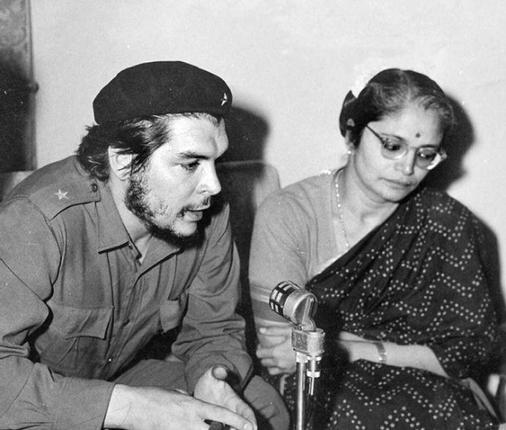 Che at the All India Radio 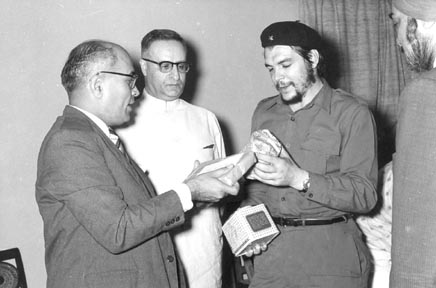 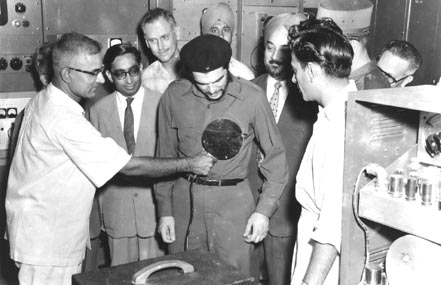 Che at an agricultural institute