NEW DELHI: An unusual marriage certificate purportedly issued by the Islamic State is being circulated online. It stipulates that the husband, presumably an Islamic State fighter, cannot stop his new bride from becoming a suicide bomber, provided IS supremo Abu Bakr Baghdadi approves her request.

The certificate was first shared by Elijah Magnier, the chief international correspondent for Al-Rai Media, who made the valid point that the certificate does not imply that the group has officially changed its position on preventing women from taking up arms.

“A woman [living under Isis] has the right to put conditions to accept the marriage,” he explained as quoted in The Independent. “This woman's condition was that her husband won't deny her wish to carry a suicide attack, if Amir al Mo'mineen (Baghdadi) accepts her (previous) demand.

“She is probably very young and enthusiastic,” he added. “Her demand to be a ‘martyr’ may have been formulated in an earlier one before her acceptance of a marriage offer. So she kept her "desire to be a martyr" standing and wanted to see it registered.

“Now, she may change her mind if she becomes pregnant or has children, or she may keep her same level of enthusiasm. But, among her girlfriends, she can show off and say: 'I am still a martyr candidate'." 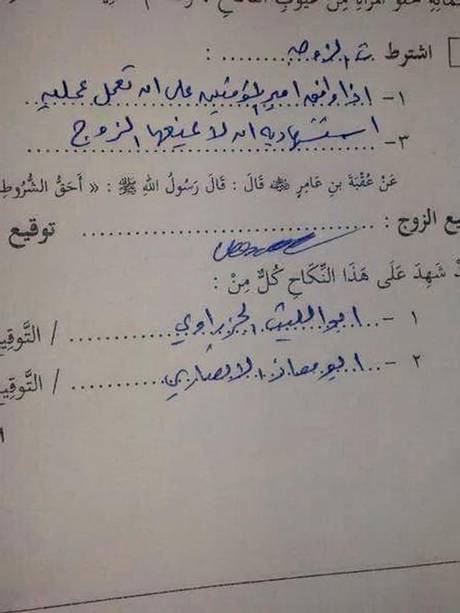 The important point here is that the certificate, even if real, is not an indication of the group’s official position. In fact, the group (again allegedly as these documents cannot be independently verified) seems to have recently issued a guidelines on how to be the ultimate wives of IS fighters in Syria and Iraq.

The document was purportedly issued by the Zora foundation -- the IS’ media arm. The Zora Foundation’s slogan is "preparing for the honour of jihad,” and unlike the IS other media arms that concentrate on recruiting fighters, deterring opponents and issuing messages to the west and other governments, IS’ newest media arm focuses exclusively on the women married to militants.

Recent posts on the al-Zora media pages include: “A Healthy and High Energy Snack for the Mujahideen with Dates and Whole Grain Millet Flour,” “Announcing an upcoming Series of Recipes,” “A Message to the Wives and Mothers of the Mujahideen and Martyrs,” and “An Important Article for Sisters.”

The posts are all in Arabic. They also all related to duties of the wife in reference to the mujahideen. The recipe for the high energy snack, for instance, is described as “a quick, light recipe that should be taken with coffee and will replenish the mujahidin”. The post adds, “Or it can be taken with water and is especially good in between battles. They contain many calories, and will prolong the strength and power of the mujahid.”

According to The Independent, Zora also posted a YouTube video detailing the ways in which women, who Isis believe should never undertake combat roles, can contribute to jihad through "feminine manual labour" such as cooking and nursing fighters. The video uses crude animations and brightly coloured backgrounds with images of a sewing machine, a first aid box, a fridge a gas cooker and a microwave appearing throughout. 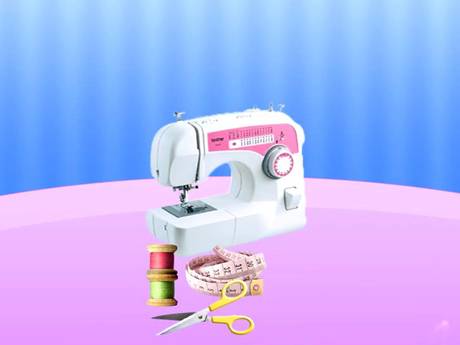 (A sewing machine shown in the video. Source: The Independent)

Although much has been written about IS recruiting foreign women, with recent analysis focusing on women being lured to be “baby factories” where their role is to help populate the IS’ self-declared “caliphate,” Zora Foundation clearly focuses on Arabic speaking women -- who form a bulk of women marrying jihadists in Syria and Iraq.

The Citizen has previously carried an article examining the diary entries and social media accounts of such women. One such woman was Aqsa Mahmood from Glasgow, whose Twitter feed -- at first glance -- could have been from her living room at home. “I’m making pancakes, and there’s Nutella, come up in a bit,” reads a tweet by Mahmood, who goes by the handle @UmmLayth. The Tweet hardly seems conspicuous, till it becomes clear that it is directed to two British friends who are in Syria, as is Mahmood, having joined the Islamic State.

The most interesting of Mahmood’s posts (her Twitter and Facebook accounts have since been deleted), however, were a series termed “Diary of a Muhajirah,” with the third post in the series being uploaded on September 11, 2014. In reference to the purpose of the series, Mahmood wrote, “These diary posts I write are only and only written with the intention of being a way of encouragement and advice for my sisters and brothers who are still stuck behind the walls of Darul Kufr.”

In this latest post, Mahmood wrote of her perception of those who have joined the IS’ war. “The media at first used to claim that the ones running away to join the Jihad as being unsuccessful, didn’t have a future and from broke down families etc. But that is far from the truth. Most sisters I have come across have been in university studying courses with many promising paths, with big, happy families and friends and everything in the Dunyah to persuade one to stay behind and enjoy the luxury. If we had stayed behind, we could have been blessed with it all from a relaxing and comfortable life and lots of money.” That’s not what we want,” she continued, reflecting on the futility of material pleasures in comparison to a “bigger” spiritual reward. “Know that in this step of Hijrah you will be honoured wherever you go by Allah swt. And everything you had He swt will replace it with something even better from Dunyah stuff and even family,” Mahmood reasoned.

Mahmood’s blog has many similarities to another active blog by a 26 year old Malaysian doctor who traveled to Syria and married an IS fighter. Like Mahmood’s series, the blog itself is titled “Diary of a Mujahir” with the posts focusing on her profession, relationships and thoughts on religion.

Like Mahmoud, Shams advises those choosing to follow her path to “do Hijrah only for the sake of Allah alone.” “My humble advice is, re-new your intention. Life here is never perfect. In fact, dunya is never perfect. The moment you made hijrah, the hardship and trial doubles. It requires you to sacrifice so many things. From family, wealth, health and desires,” she writes, adding that she too questioned her decision a month into her hijrah. “ I was so ill. I had severe dehydration and the food made me sick. I was even thinking of going back, because I couldn’t handle the pressure in me. But then, being surrounded by people who reminds you of All?h, helped a lot. That is why, hijrah should be made only and only for the sake of All?h alone. If you think by coming here you will be always happy, you’re wrong.”

In a post titled, “Goodbye Boyfriend. Hello Mr. Husband,” Shams speaks to those “you who are in unlawful relationship or in hard time in purifying yourself.” Acknowledging that “it is difficult… to say good-bye to the person that you loved the most,” the post, in two parts, speaks of the benefits of giving up a lover and recommends some coping strategies. Writing of marriage in the Islamic State, Shams says that marriage will not be forced, will not be conducted without a guardian (wali), and reiterates that the woman has a say in choosing her husband. “This post is to clarify the misconception that many have about marriages that take place in Shaam,” Shams says in reference to the post.

There are several other such accounts on social media. Posts, comments and interactions between women -- from the Arab world and elsewhere -- who have given up some aspect of their lives to join mujahideen. The commonality in all posts is that they serve as a “survival guide” of sorts, focusing on advice and coping mechanisms. The Zora Foundation serves to address exactly these concerns.