NEW DELHI: Many startups owe their success to the principle of crowdfunding -- namely, the practice of funding a project or venture by raising monetary contributions from a large number of people, typically via the internet. Burundi’s beleaguered President, Pierre Nkurunziza, is now applying this principle to political elections, asking people to donate money to help with the country’s controversial elections scheduled for June.

The appeal was made on Facebook where the government’s official page posted the following: 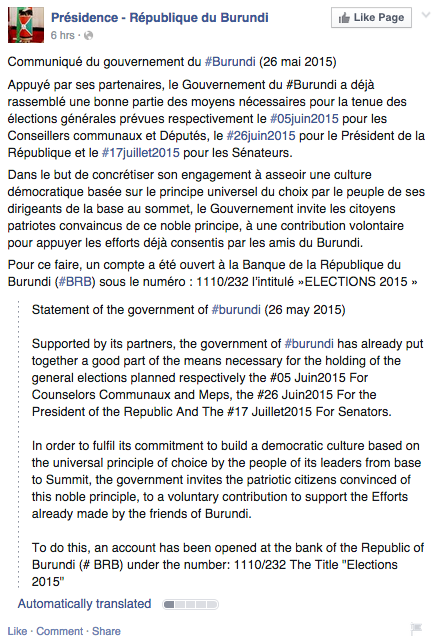 The appeal was made after the European Union announced that it would be withholding more than $2m (£1.3m) of funding for the elections. The money is being withheld as weeks of violent protests and a failed coup against President Nkurunziza's bid for a third term left more than 30 people dead and forced over 100,000 to flee the country. The EU said it will withhold the money unless "conditions for a free, peaceful and credible election are secured". Belgium also suspended a similar amount.

The Burundi government seems determined to push through with elections, as evinced by the Facebook post that trumpets the goal of supporting "a democratic culture based on the universal principle of the choice of the people." "The government invites patriotic citizens convinced by this noble principle to make a voluntary contribution to push forward the efforts already agreed to by other friends of Burundi," the French-language plea for funding says (as translated in The Global Post).

The crisis stems from the fact that under Burundi’s constitution and the peace accord that ended the country’s devastating civil war, the President can only serve two terms. President Nkurunziza, however, is gunning for a third term, rationalising the bid on the grounds that he wasn’t elected by popular vote for his first term in office.

The parliamentary elections were due to be held on Tuesday but were suspended by ten days.

Currently, the situation in Burundi is extremely tense, as the fighting raises concerns linked to renewing the civil war. On May 13, army general Godefroid Niyombare said that he was "dismissing President Pierre Nkurunziza" following the unrest stemming from the President’s bid for another term. The Presidency, however, tweeted that the "situation is under control" and there is "no coup.” President Nkurunziza was at the time in neighbouring Tanzania attending the 13th Extraordinary Summit of the East African Community Heads of State, which had been convened to discuss the situation in Burundi. Nkurunziza quickly attempted to return to Burundi, but he was apparently unable to do so because rebel soldiers had taken control of the airport in Bujumbura. Nevertheless, the head of the armed forces, Prime Niyongabo, said on state radio during the night of 13–14 May that the coup attempt had been defeated, and he called on rebel soldiers to surrender. Loyalist forces remained in control of the state radio and presidential palace. Shortly thereafter, "heavy fighting" was reported around the state radio as it was attacked by rebel soldiers.

Nkurunziza's office announced the president's successful return to Burundi on 14 May, as army and police loyal to Nkurunziza regained control of much of Bujumbura. On 15 May, the government said it arrested Niyombare and two other leaders of the coup and would charge them with mutiny.