The One Tweet That Sums Up The FIFA Crisis

NEW DELHI: Football’s governing body Fifa is in a mess. A few hours ago, Fifa President Sepp Blatter announced his resignation, saying “Fifa needs profound restructuring.” Blatter, according to many, was the pinnacle of everything wrong with the governing body. He was re-elected two days after US prosecutors launched a criminal inquiry last week, with seven Fifa officials arrested in Switzerland. These officials were part of a group of 14 people indicted.

Blatter has presided over Fifa for four entire terms, entering his fifth term when he was re-elected last week. To put things in perspective, here are some of the things that have happened since Blatter took the helms at Fifa: The founding of Apple computers, the fall of the Berlin wall, Pol Pot becoming prime minister of Cambodia, the birth of current world footballer of the year Cristiano Ronaldo and wait for this -- the meeting of Ronaldo’s parents!

If Fifa is a rotten apple, Blatter was at its core. On being re-elected for a fifth time on Friday, Blatter said: "I am the president now, the president of everybody.”

This tweet that circulated after Blatter’s re-election sums up the crisis. 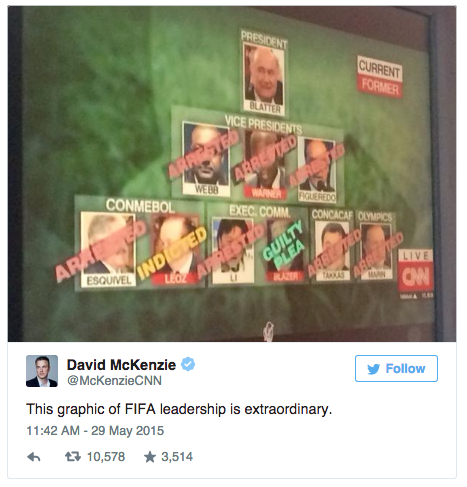 As the graphic shows, pretty much all of Fifa’s top leadership have been arrested, indicted or plead guilty to high-level crimes. As mentioned, the election followed the arrest of seven top Fifa officials in Switzerland, for "racketeering, wire fraud and money laundering conspiracies, among other offenses," according to the Department of Justice.

As icing on the cake, it was announced that Blatter too is being investigated by US officials as part of their inquiry into corruption at Fifa. US media reported this tit bit after Blatter announced his resignation.

It’s primarily this American investigation that has plunged Fifa into its most serious crisis yet. In its prosecution, the US justice department said 14 individuals were under investigation worldwide for allegedly accepting bribes and kickbacks estimated at more than $150m (£97m) over a 24-year period.

The bids for 2018 and 2022 -- to Russia and Qatar respectively -- are being independently investigated.

So now what next for Fifa?

Fifa's head of audit and compliance, Domenico Scala, has promised large-scale reform. However, as a report in the BBC correctly states, “as always with Fifa it is a case of believe it when you see it. All the reforms will have to be voted through by Fifa members, who have previously voted them down.”

Will post-Blatter Fifa be any different from Blatter-Fifa? It remains to be seen, but the investigations and charges will level a significant amount of pressure, if nothing else.