NEW DELHI: A depressing forecast from the World Bank seems to have good news for India’s economy. The World Bank’s twice-yearly Global Economic Prospects document reserves praise for only India, describing it as a “shining star” whilst spelling doom and gloom for emerging economies that are set to see slower than anticipated growth.

India, the report states, is set to emerge as the world’s fastest growing economy. At the same time, the report highlights the need for emerging economies to invest in sectors such as health and education -- so as to be able to offset the bad news. Ironically, the World Bank’s “shining star” India, is one of the worst performers when it comes to those two crucial sectors.

The organisation has slashed its growth forecasts for developing economies to 4.4% in 2015, down from the 4.8% it was expecting in December. The culprits are rising US interest rates and lower commodity prices. “Developing countries were an engine of global growth following the financial crisis, but now they face a more difficult economic environment,” said the bank’s president, Jim Yong Kim.

India, however, seems to have bucked this trend. World Bank senior economist Franzisk Ohnsorge said India had benefited from “both good policies and luck,” as the Modi government took advantage of low oil prices to to phase out costly fuel subsidies and bank the proceeds and worked toward a more credible inflation-fighting system.

India, thus, is expected to be the fastest growing economy in 2015, expanding by 7.5%, and to continue outpacing China in 2016 and 2017. “It’s our shining star,” said Ohnsorge. “Low oil prices have really benefited India.”

However, as Kim added, “We believe that countries that invest in people’s education and health, improve the business environment, and create jobs through upgrades in infrastructure will emerge much stronger in the years ahead,” he said. “These kinds of investments will help hundreds of millions of people lift themselves out of poverty.”

In this respect India has a long way to go. Although the World Bank report makes no mention of these developments, in Budget 2015, the country cut education spending by 2 percent, with just 3.8 percent of the union budget allocated to the education sector. India is abysmally low in terms of countries as ranked by government education expenditure as GDP percentage, coming in somewhere around 143-145 amongst 190 countries.

Public spending on health doesn’t fare much better, cutting health spending from Rs 351.63 billion in 2014-15 to Rs 33,152 crore in 2015-16. To put things in perspective, the world’s soon-to-be fastest growing economy spends 1 percent of its gross domestic product (GDP) on public health, compared with 3 percent in China and 8.3 percent in the United States.

So what is propelling India’s growth?

The report explains: Revised GDP data for India show a faster rebound than initially estimated, with growth rising to 7.3 percent in the recently-completed fiscal year (FY2014–15, ending in March). The upward revisions—deriving mainly from improvements in data sources used to compute GDP alongside baseyear revisions to better capture the changing structure of the economy—show strengthening manufacturing and strong growth in government consumption offsetting weakness in external demand over the past year. Higher frequency activity data show that the domestic recovery is picking up (Figure 2.46): momentum in industrial output has picked up strongly since the start of the year and while business sentiment data are pointing to a sustained acceleration in the service sector. Meanwhile, earlier tightening of monetary policy and domestic policy measures such as limited increase in mandated minimum procurement prices for grains has sent inflation tumbling, increasing real household disposable incomes. 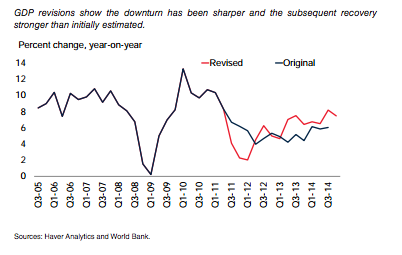 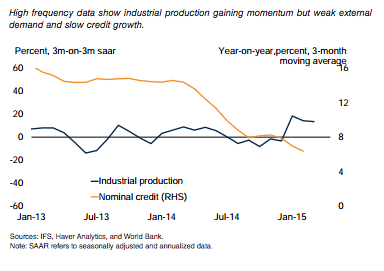 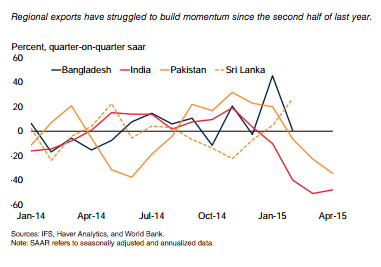 India is expected to continue on its path of recovery, with growth expected to reach 8 percent in FY2017–18, from 7.5 percent in FY2015–16. The improvement in the outlook hinges on steady progress on key reforms, including removing bottlenecks in public-private partnerships, the GST bill, and input market reforms (land, labor and finance) which are needed to ease supply side and energy constraints. The GST would help create a single markets for goods and broaden the tax base. Fiscal discipline elsewhere would help public capital expenditures to rise as announced in the recent budget, and potentially attract private investment, which has been extremely weak in recent years. The slower pace of fiscal consolidation over the next few years means that fiscal tightening will prove less of a drag, while lower corporate taxes and base-broadening measures should also help support business confidence and lift private investment.

A summary of the global economic outlook is as follows: 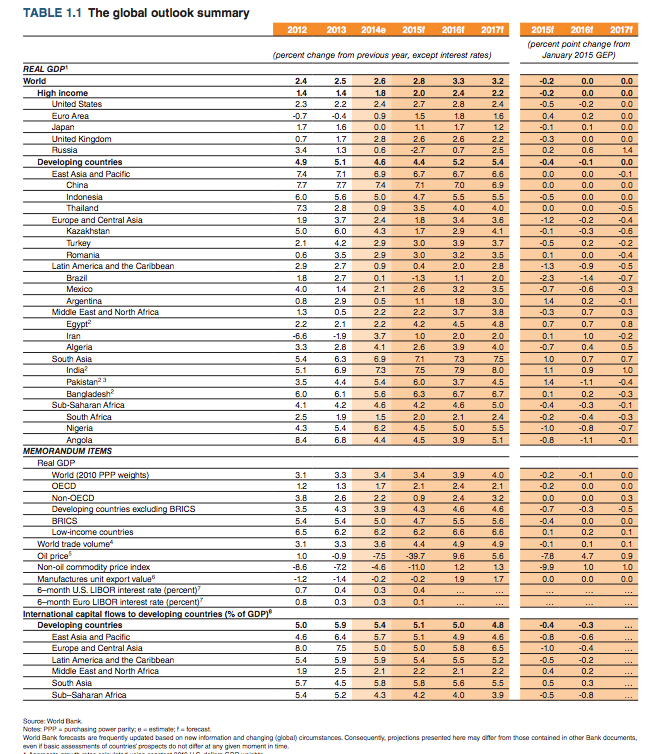