Is Obama Coffee 'Black And Weak'?

NEW DELHI: TV host and wife of a senior Israeli politician, Judy Nir Mozes Shalom -- who is married to Israeli Interior Minister Silvan Shalom -- has sparked outrage after she posted a racist tweet referring to a misplaced pun on US President Barack Obama and Obama Coffee.

The tweet, although quickly deleted after being uploaded, asked: “Do u know what Obama Coffee is? Black and weak.”

Mozes has since apologised, but the damage has already been done. “President Obama I shouldn't have written the inappropriate joke I heard,' she wrote. “I like people no matter their race and religion.” “Sorry if I caused any offence to anyone. I hope I will stay married when my husband will land and hear what I did.” 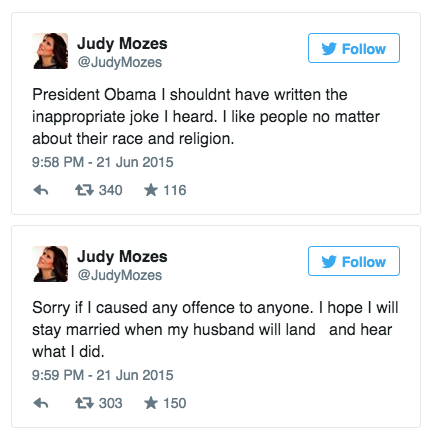 The tweet was ridiculed on social media, with the Twitterati being their harsh best. #ObamaCoffee began trending on Twitter.

Although Mozes quickly apologised, the US President is no longer the favourite international leader in Israel, with relations between the two close allies having turned a bit sour.

In fact, post Israeli Prime Minister Benjamin Netanyahu’s re-election, Obama did not have the nicest things to say. Tensions between the US and Israel have simmered ahead of Israel’s elections, with a flashpoint being Netanyahu’s address to Congress on the Iran deal. Obama -- who hadn’t invited Netanyahu in the first place -- did not even attend. Faced with criticism, Netanyahu refused to cancel the speech. Netanyahu tweeted, “I am going to the United States not because I seek a confrontation with the President but to speak up for the very survival of my country.”

The speech however, had more to do with Netanyahu’s own survival, that Israel’s. It was a gamble meant to cater to the right-wing vote in Israel, at the expense of the country’s relations with the White House. Netanyahu seems to believe that if he is able to successfully trump up national security as a key issue, he may be able to return for a historic fourth term.

The gamble paid off but at the cost of alienating Israel’s closest ally -- the US.

In fact, although media reports have focused on Netanyahu’s opposition to a two-nation solution as the key factor in the dip in ties, the Israeli leaders aides have cited Iran as the source of tensions.

Yuval Steinitz, a Likud minister loyal to Netanyahu, told Israeli radio on Sunday that the main reason for tensions with Washington was “the strong disagreement we have with the United States over the Iran issue.” “We cannot accept the idea that the whole world — the Iranians, the Europeans, the Americans — are talking about the nuclear agreement with Iran and we have to sit quietly on the side,” he said.

Similarly, Dore Gold, a former Israeli ambassador to the United Nations who was a formal adviser to Netanyahu, said (as quoted in The New York Times), “I don’t see the disagreements over the Palestinians being the basis for the state of relations — it must extend to the fact that they’re about to cut a deal with Tehran and they know that Israel has serious reservations about the substance of that agreement.” “The issue of Iran is paramount in both Jerusalem and in Washington, and it may affect the tone at present.”

Whether the negotiations with Iran or Netanyahu’s position on Palestine is the source, the bottom line is that US-Israel relations have dipped to a historic low -- thereby reshaping the Middle East and perhaps even, paving the way for Iran’s growing influence in the region.