White Americans Biggest Terror Threat In The US

White Americans are the biggest terror threat in the United States

NEW DELHI: A recent report has identified the biggest security threat to the United States. It is -- drumroll -- white American supremacists who have claimed more lives in lethal terrorists incidents on US soil since 2001 than any other group.

The report by the New America Foundation has found that the total number of people killed in “deadly right wing attacks” since the September 11 attacks in 2001 are 48. Compared to this, 26 people have been killed in what have been labelled as “deadly jihadist attacks.”

It is worth noting that the term “jihadist” has been used problematically, referring, for instance, to the Fort Hood shooting and the Boston Bombings, where although the perpetrators were Muslim, no terrorist links were identified. The 2009 Fort Hood shooting, to continue with the example, involved Nidal Malik Hasan, a U.S. Army major and psychiatrist who fatally shot dead 13 people. Although the report classifies this as a “jihadist” attack, the United States Department of Defense and federal law enforcement agencies have classified the shootings as an act of workplace violence. The Tsarnaev brothers, on the other hand, have been labelled “homegrown” terrorists, but no evidence of their links or connections to terrorist groups have been found.

Further, the report excludes certain events of violence from its definition of “terrorism.” Most mass shootings, for instance, like Sandy Hook or the Aurora, Colorado movie theater shooting — both in 2012 — weren't included. Also not included was the killing of three Muslim students in North Carolina earlier this year.

However, even with this problematic, broad and vague use of the word “jihadi” and its far too narrow use of the word “terrorism” -- white Americans are still the forerunners when it comes to terrorism on US soil. Most recently, the Charleston Church Shooting claimed nine lives when 21-year-old Dylann Roof opened fire inside one of the United States' oldest black churches. 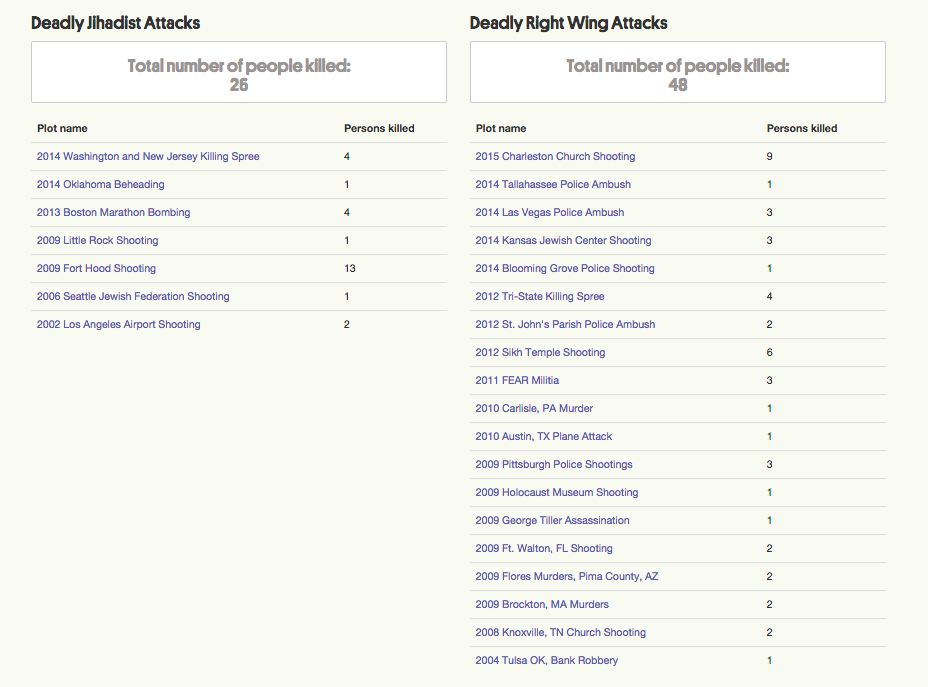 The report indicates that out of 26 attacks since 9/11 that the group defined as terror, 19 were carried out by non-Muslims. A majority of these are white American males. Ironically, as The Global Post concludes: “there are no white Americans languishing inside the prison camp at Guantanamo Bay. And there are no drones dropping bombs on gatherings of military-age males in the country's lawless border regions.”

Acts of terror by white attackers is hardly accorded space in the narrative on terror in America. The narrative, however, is all too familiar, as summed up by this Tweet: 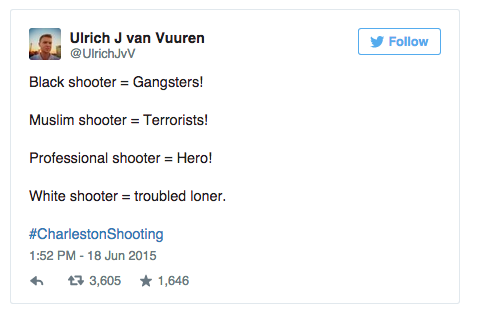 Although it is an oversimplification, the Tweet demonstrates what is wrong with media narratives on incidents of violence the world over. The Boston Bombings, for instance, are referred to as acts of terrorism even though the perpetrators -- Chechen brothers Dzhokhar Tsarnaev and Tamerlan Tsarnaev -- have no definite links to any terrorist groups. Similarly, when Army psychiatrist Maj. Nidal Malik Hasan killed 12 people in Fort Hood near Killeen, Texas, his actions were described as terrorism (and this report continues that narrative).

When protests emerged across the United States following the string of police violence on unarmed black men, most recently regarding the death of Freddie Gray in Baltimore, the media described the crows as “thugs” and “rioters.” The narrative focused on the violence of a handful of protesters and not that of the police forces that prompted the demonstrations.

On the other hand, when Ellie Rodger killed six people in Santa Barbara, it was not described as terrorism nor was he labelled a thug. The narrative here focused on how Rodger was a “troubled young man,” on aspergers and medical illness, on peer pressure and bullying.

When the perpetrator is white, the media narrative seems to shift toward mitigating motives, whereas in the case of a Muslim attacker, the incident is almost always labelled an act of terrorism.