ELECTRONIC INTIFADA: Israeli forces boarded and commandeered the Marianne on Monday, one of four boats that were bound for Gaza in the latest attempt to break the tight Israeli siege of the occupied territory.

At around 2 am Gaza time Marianne was surrounded by three Israeli navy boats while in international waters more than 100 miles off the coast of Gaza, organizers Freedom Flotilla III said in a press release.

“After that we lost contact with the Marianne and at 05:11 am (Gaza time) the IDF [Israeli army] announced that they had ‘visited and searched’ Marianne,” the press release states. “They had captured the boat and detained all on board ‘in international waters’ as they admitted themselves. The only positive content in the IDF announcement was that they still recognize that there is a naval blockade of Gaza, despite the Netanyahu government’s recent denial that one exists.”

Organizers called the seizure of the boat and its passengers an “act of piracy.”

Israel’s Haaretz reports that the boat is being towed to Usdud (Ashdod), a port in present-day Israel, where the passengers “will be interrogated before being escorted to Ben Gurion Airport and flown out of Israel.”

The 18 passengers aboard the Marianne include Basel Ghattas, a Palestinian citizen of Israel and member of the Israeli parliament, former Tunisian president Moncef Marzuki, Spanish member of the European Parliament Ana Miranda and Professor Robert Lovelace, retired chief of the Ardoch Algonquin First Nation in Canada.

Many Palestinians had eagerly awaited the flotilla, hoping that it would call international attention to the siege which Israel imposed eight years ago. 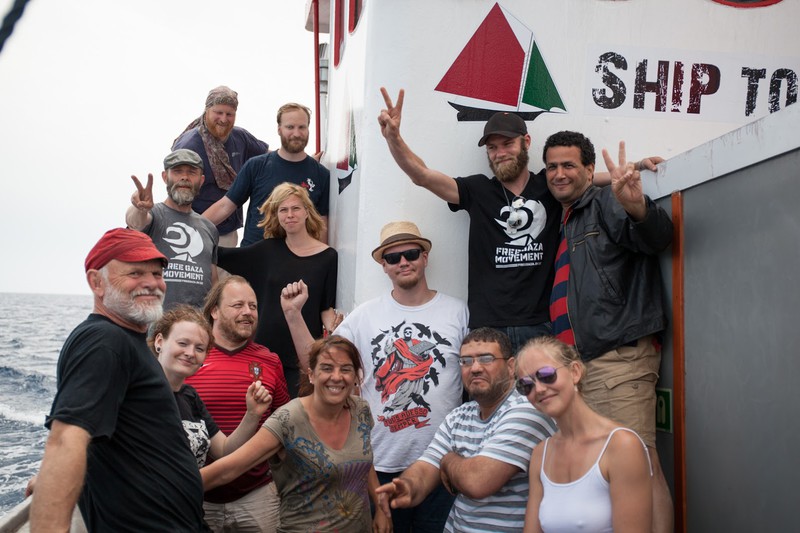 Members of the crew of the Marianne, which was seized by Israeli forces in international waters early on 29 June as it headed toward Gaza.

Three other boats – Rachel, Vittorio and Juliano II – that also made up the flotilla have headed back to their ports of origin.

In total, 47 passengers from 17 countries were aboard the boats, which carried medicines, solar panels and above all a strong message of solidarity for the 1.8 million Palestinians still besieged in Gaza one year after Israel began its 51-day destructive assault that killed more than 2,200 people.

Contrary to Israeli claims that the Marianne was taken peacefully, this video shows that armed commandos used brutal violence against unarmed passengers aboard the Gaza-bound boat early on Monday.

According to the organizers of the flotilla, 14 of the 18 civilian passengers and crew remain in Israeli custody more than two days after they were violently abducted in international waters to prevent them breaking the Israeli-imposed siege on Gaza.

The other passengers remain in detention at Givon prison in present-day Israel.

The video shows Ghattas addressing officers on an Israeli naval ship through a megaphone.

Ghattas says that he is not in command of the Marianne but is speaking with the captain’s permission. He offers the Israelis that they send one unarmed person onto the Marianne to talk to the captain.

The Israeli officer asks, “You’re suggesting that one of us come aboard unarmed?”

Ghattas responds: “Unarmed, he boards the ship and we talk to him.”

The offer appears to have been rejected as the video – first released by Israeli media – then shows the Israeli commandos announcing their intention to forcibly seize the boat.

The Israeli officer also lectures the passengers that they are on their way to “support a regime that has the same ideology as those who committed act of terror on your coast” – an apparent reference to the massacre of tourists on a Tunisian beach which has no connection whatsoever to Gaza or the people or groups in it.

Not only that, but Islamic State, the group that claimed the Tunisia attack, recently threatened all-out war against the Palestinian resistance group Hamas which runs the interior of Gaza.

One of the passengers then replies, “Why this bullshit? We are not supporting any regime.”

The video then apparently shows Israeli commandos attacking a screaming passenger with a Taser – an electrical stun gun. Someone is heard to shout, “Stop, stop what you’re doing!”

The video then also shows the invaders speaking again with Ghattas, addressing him as a member of Israel’s parliament, the Knesset.

Ghattas tells them: “you are now attacking a ship on international waters.”

An Israeli continues to make violent threats, saying “we don’t want to hurt you.”

The faces of the Israeli attackers are obscured, something likely done to protect them from possible prosecution over what flotilla organizers have previously termed an act of piracy.