LONDON: Cambodia has a major problem of landmines, left by a legacy of three decades of war. The Cambodian Mine Action Centre (CMAC) estimates that there may be as many as four to six million mines and other pieces of unexploded ordnance in Cambodia. A large part of these landmines are in rural areas and pose a major threat to the people of the country. It is of no surprise that Casualty statistics from the Cambodian Mine Victim Information Service (CMVIS) show Cambodia to have one of the highest casualty rates in the world. The number of casualties (persons killed and injured) in 2013, the last year for which figures are available, was 111 (22 dead and 89 injured). One-third of the casualties are children.

In this deadly scenario, efforts to “sniff out” mines are of heroic proportions, and Cambodia has a new hero (used in a gender-neutral sense of the term). Meet the Gambian pouched rat -- deployed to Cambodia from Tanzania by a Belgian non-profit organisation APOPO to help help clear mines. 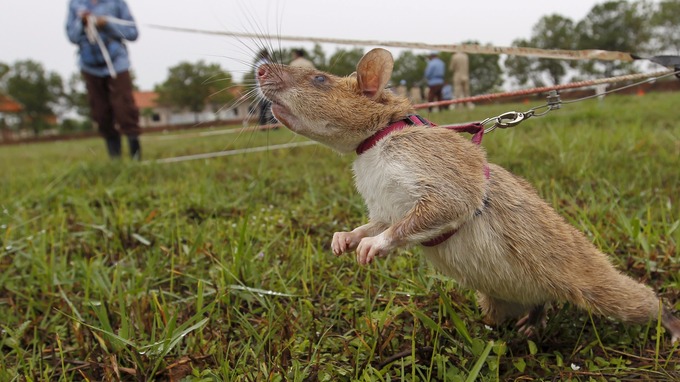 (Image credit: Reuters: One of the mine-hunting rats in training on a dummy minefield in Cambodia).

The tiny mammals have been training since they were four weeks old, and can detect trace levels of TNT and other explosives in the soil.

For those reading these and wondering about the fate of the brave little creatures, worry not -- the main advantage of using rats is that landmines pose no danger to them because the rats are not heavy enough to trigger an explosion.

The rats are also far more efficient than their human counterparts, taking on average 11 minutes to detect a mine, whereas humans take on average five days to accomplish the same task.

The rats are rewarded with bananas when they successfully discover a mine. During training, the rats get extra points if they avoid dummy smells. “We plant oil filters, tuna cans and coffee grains in the ground — all kinds of things to confuse the rat,” explains Hulsok Heng, supervisor of the Hero Rat program in Cambodia (as quoted by the Global Post). 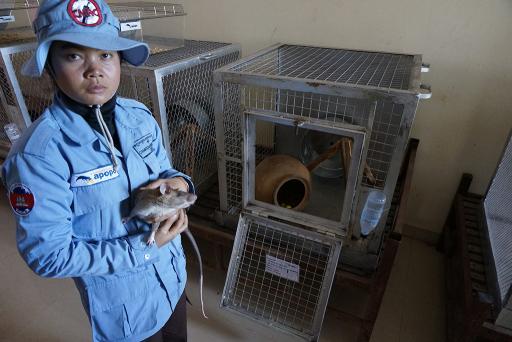 The rats are also more efficient than metal detectors which beep at every coin, can and piece of foil in the ground. The rats, instead, trained to detect TNT are more precise in their search.

The tiny mammals deserve all praise. Cambodia has 40,000 amputees, which is one of the highest rates in the world. There has been progress; in the last 20 years the CMAC has cleared 2.6 million landmines and unexploded ordnance. As a result, casualty rates have fallen from 3047 in 1996 to 134 in 2013 — a record low.

The rats’ success in Cambodia is also important as it can determine their use for similar purposes in other conflict-racked regions of the world.