UNITED NATIONS (IPS): Just weeks after an 18-month-old baby was killed in an arson attack in the Palestinian village of Duma, located south of Nablus city in the Occupied West Bank, a United Nations special committee has blasted Israel’s policy of settlement expansion, saying it is the root cause of violence towards Palestinians.

Having completed their annual fact-finding mission to Jordan on Aug. 8, the same day that the father of the baby boy also succumbed to severe burns after settlers threw a fire bomb into the family’s home, the Committee to Investigate Israeli Practices Affecting the Human Rights of the Palestinian People and Other Arabs of the Occupied Territoriesstated it was “alarmed” at the escalation of violence towards Palestinians, blaming a “climate of impunity relating to the activities of settlers” for tragedies such as the attack on Jul. 31.

In a press release issued on Aug. 10, the committee revealed that testimony from a range of civil society groups and Palestinian officials all pointed to one conclusion: that until the government of Israel reigns in illegal settlement activity in the West Bank, the violence will likely continue.

According to the non-governmental organisation Peace Now, Israeli settlers in the West Bank currently number some 350,000, in addition to an estimated 300,000 settlers residing in parts of Jerusalem that Israel captured and illegally annexed from Jordan in 1967.

Settlements are primarily concentrated in a zone marked ‘Area C’, which accounts for 61 percent of the West Bank’s territory. Here, an estimated 60,000 Palestinians are squeezed into an ever-shrinking space, while new settlements further segregate and marginalize them in an already miniscule area.

Last year, Israel upped its annual spending on settlement activity in the West Bank to 100 million dollars, representing an increase of 600 percent from the previous year. Factor in settlement expenditure in the Golan Heights, and the number shoots up to 200 million dollars per year.

Peace Now says that since 2009 the Israeli government has approved bids for some 4,485 new units including houses, roads, industrial buildings and agricultural sites; in the last two years alone, two-thirds of fresh construction has taken place on the Palestinian side of a border agreed upon in the 2003 Geneva Initiative.

The U.N. has, on countless occasions, reiterated that the building of settlements on occupied land is illegal under international law. Despite repeated entreaties by a string of U.N. secretaries-general, including most recently Ban Ki-moon, there are now close to 220 Israeli settlements dotting the 2,100 square-mile West Bank.

According to one comprehensive report by the New York Times, these residences range from scrappy “hilltop outposts”, to sprawling cities that house their own universities and movie theatres.

The largest of these, an Orthodox enclave known as Modiin Illit, houses 60,000 residents and is growing at a terrific pace, recording 60 births every week in 2009. 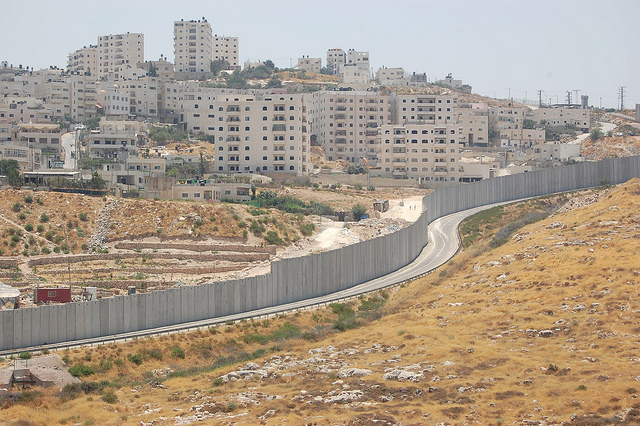 The separation wall runs between the Israeli settlement of Pisgat Ze’ev and a Palestinian refugee camp. Credit: Jillian Kestler-D’Amours/IPS

Besides annexing Palestinian land and further fragmenting West Bank territory, settlement expansion has also contributed to a climate of impunity in which crimes against Palestinians – often at the hands of settlers themselves – continue unchecked.

A recent report by the Israeli rights group Yesh Din revealed that “only 7.4 percent of police investigations carried out by the SJ (Samaria and Judea) District Police into offenses committed by Israeli civilians against Palestinians and Palestinian property in the West Bank have resulted in indictments against the suspects.”

The organisation says the figure is based on a sample of some 1,000 investigations carried out by the SJ District Police between 2005 and 2014. Many acts of violence and vandalism occur on Palestinian farmland, or on the outskirts of Palestinian villages.

Yesh Din has labeled these attacks as “a calculated strategy designed to restrict and dispossesses Palestinians of their land.”

In the first seven months of 2015 alone, the U.N. has documented over 120 attacks by Jewish settlers on Palestinians living in the West Bank. Reports by Yesh Din indicate that these violent incidents run the gamut from shootings and beatings, to running Palestinians over with vehicles.

Attacks on property account for 41 percent of all complaints filed, half of which involve the destruction of fruit trees. Since 1967, over 800,000 olive trees have been uprooted in the West Bank and Gaza.

Yesh Din also says that five percent of the SJ District Police’s investigative files “include the killing of farm animals, desecration of mosques and cemeteries, discharging of sewage into Palestinian farmland [and] dumping of waste on land belonging to Palestinians.”

A further 14 percent of criminal offenses against Palestinians involve settlers attempting to seize Palestinian land by practicing unauthorized cultivation, fencing off certain areas, illegally trespassing or setting up portable homes and greenhouses on the Palestinian side of the border.

Although the Israeli government often publically condemns settler violence, a quick look at the numbers paints a clearer picture of its policies: according to a comprehensive analysis of the settlements’ economic costs published by the Tel Aviv-based Macro Center for Political Economics in 2015, the state allocated 950 dollars to each Israeli resident in the West Bank in 2014, twice the amount spent on residents in larger cities like Tel Aviv or Jerusalem.

Its expenditure on Israeli citizens in more isolated settlements amounted to 1,480 dollars per person last year.