A stack of signs from the Palestine Contingent to Ferguson October

NEW DELHI: Over 1,000 Black activists, artists, scholars, students, and organizations have issued a statement expressing their solidarity and commitment to ensuring justice for Palestinians. 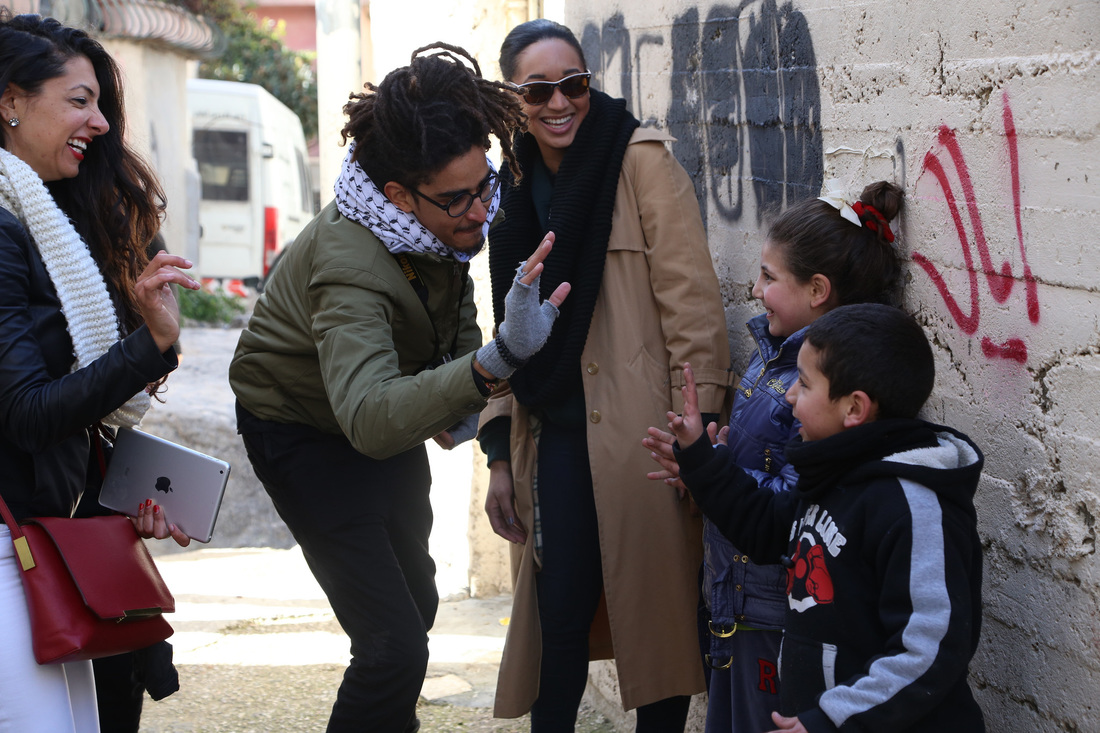 (Members of the Dream Defenders delegation to Palestine play with Palestinian children. (Photo by Christopher Hazou)) 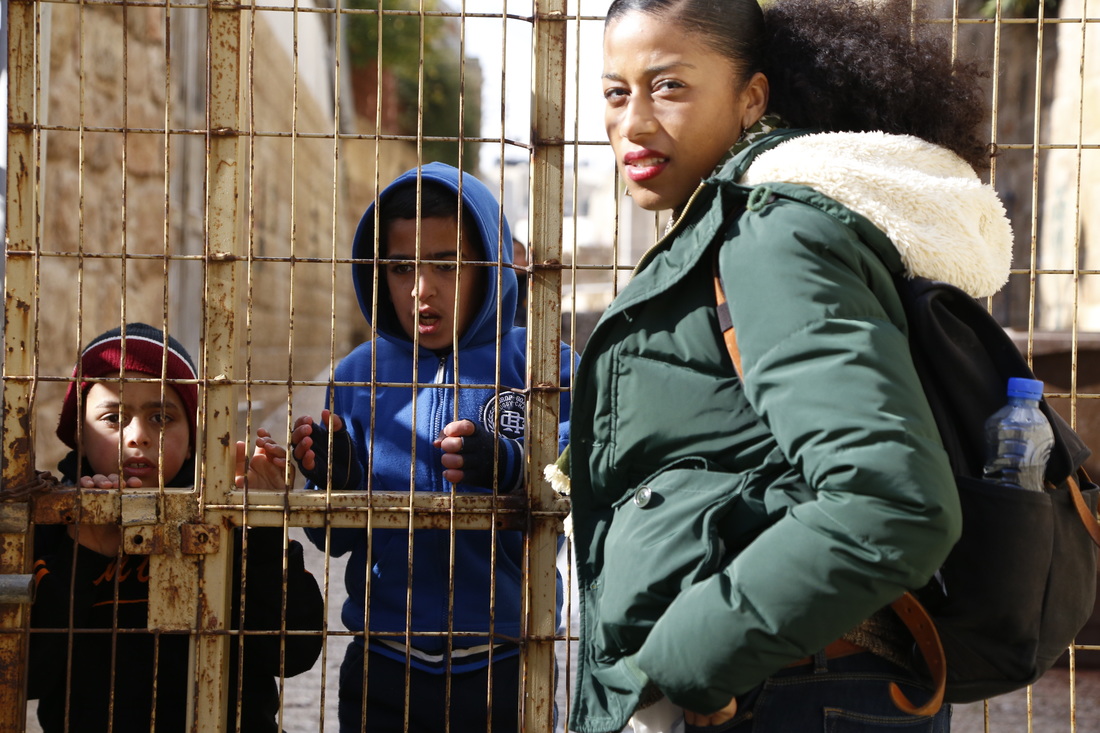 (In Hebron, a fence imposed by the Israeli military separates two Palestinian children from a member of the Dream Defenders delegation to Palestine. (Photo by Christopher Hazou))

The statement is printed in full below:

"The past year has been one of high-profile growth for Black-Palestinian solidarity. Out of the terror directed against us—from numerous attacks on Black life to Israel’s brutal war on Gaza and chokehold on the West Bank—strengthened resilience and joint-struggle have emerged between our movements. Palestinians on Twitter were among the first to provide international support for protesters in Ferguson, where St. Louis-based Palestinians gave support on the ground. Last November, a delegation of Palestinian students visited Black organizers in St. Louis, Atlanta, Detroit and more, just months before the Dream Defenders took representatives of Black Lives Matter, Ferguson, and other racial justice groups to Palestine. Throughout the year, Palestinians sent multiple letters of solidarity to us throughout protests in Ferguson, New York, and Baltimore. We offer this statement to continue the conversation between our movements:

On the anniversary of last summer’s Gaza massacre, in the 48th year of Israeli occupation, the 67th year of Palestinians’ ongoing Nakba (the Arabic word for Israel's ethnic cleansing)—and in the fourth century of Black oppression in the present-day United States—we, the undersigned Black activists, artists, scholars, writers, and political prisoners offer this letter of reaffirmed solidarity with the Palestinian struggle and commitment to the liberation of Palestine’s land and people. 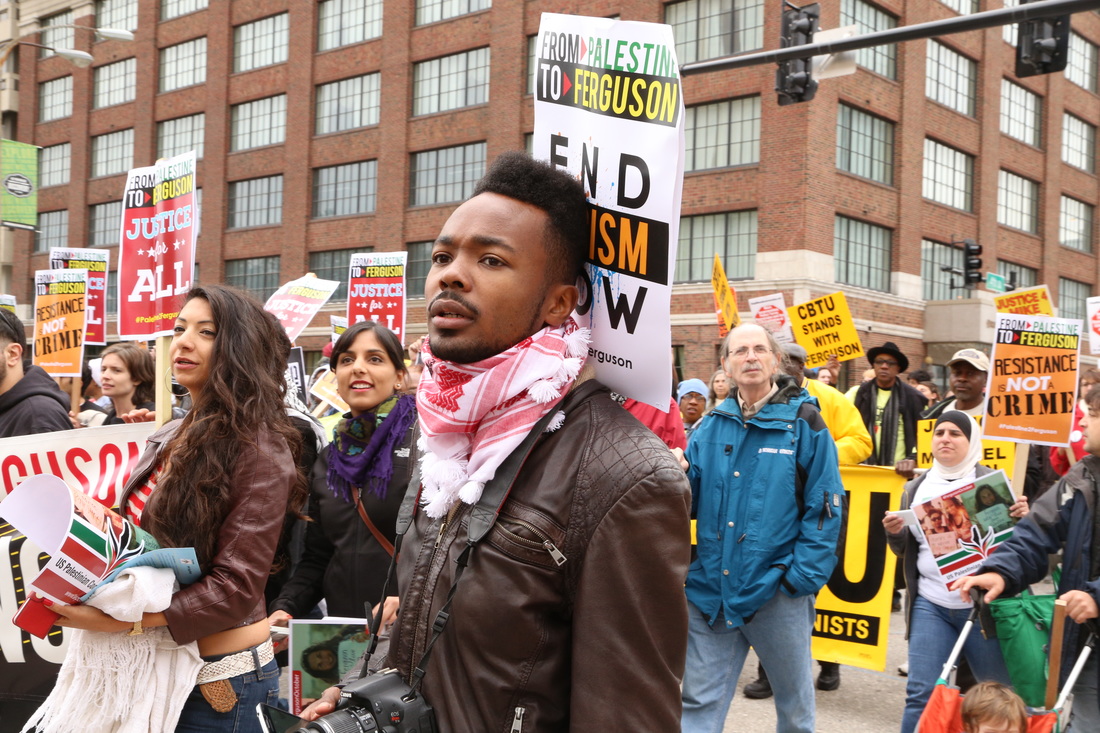 (Picture of the Palestine Contingent during the main march during Ferguson October. (Photo by Christopher Hazou))

We can neither forgive nor forget last summer’s violence. We remain outraged at the brutality Israel unleashed on Gaza through its siege by land, sea and air, and three military offensives in six years. We remain sickened by Israel’s targeting of homes, schools, UN shelters, mosques, ambulances, and hospitals. We remain heartbroken and repulsed by the number of children Israel killed in an operation it called “defensive.” We reject Israel’s framing of itself as a victim. Anyone who takes an honest look at the destruction to life and property in Gaza can see Israel committed a one-sided slaughter. With 100,000 people still homeless in Gaza, the massacre's effects continue to devastate Gaza today and will for years to come.

Israel’s injustice and cruelty toward Palestinians is not limited to Gaza and its problem is not with any particular Palestinian party. The oppression of Palestinians extends throughout the occupied territories, within Israel’s 1948 borders, and into neighboring countries. The Israeli Occupation Forces continue to kill protesters—including children—conduct night raids on civilians, hold hundreds of people under indefinite detention, and demolish homes while expanding illegal Jewish-only settlements. Israeli politicians, including Benjamin Netanyahu, incite against Palestinian citizens within Israel’s recognized borders, where over 50 laws discriminate against non-Jewish people.

Our support extends to those living under occupation and siege, Palestinian citizens of Israel, and the 7 million Palestinian refugees exiled in Jordan, Lebanon, Syria and Palestine. The refugees’ right to return to their homeland in present-day Israel is the most important aspect of justice for Palestinians.” 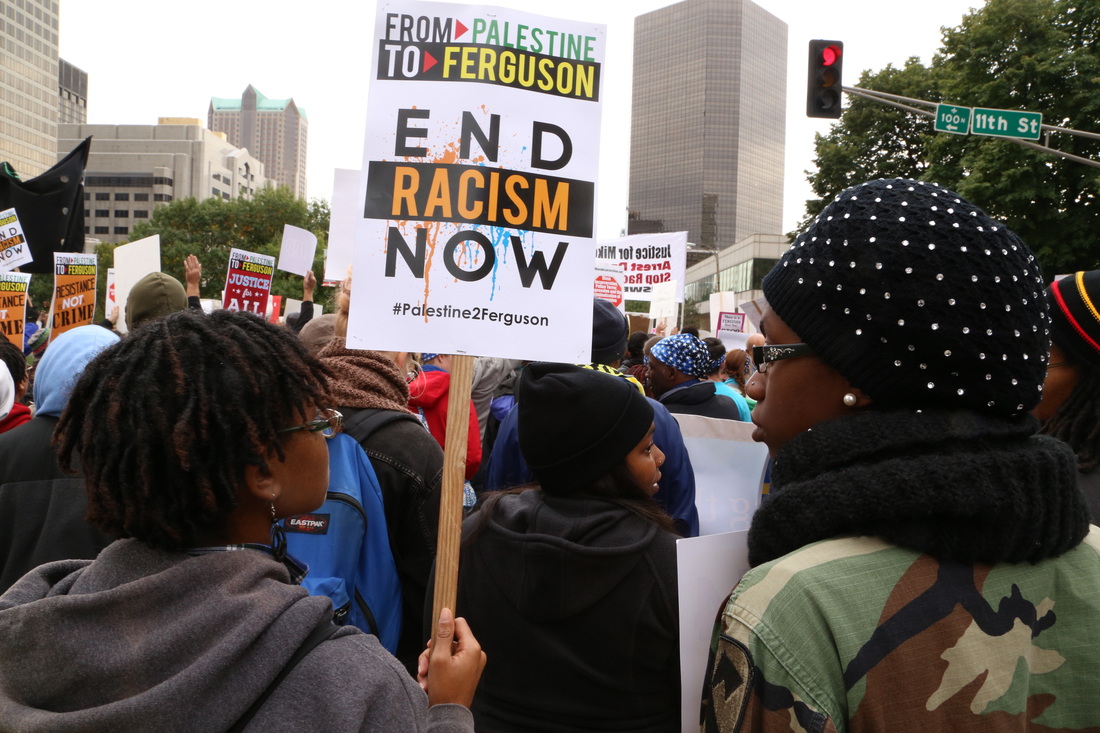 Palestinian liberation represents an inherent threat to Israeli settler colonialism and apartheid, an apparatus built and sustained on ethnic cleansing, land theft, and the denial of Palestinian humanity and sovereignty. While we acknowledge that the apartheid configuration in Israel/Palestine is unique from the United States (and South Africa), we continue to see connections between the situation of Palestinians and Black people.

Israel’s widespread use of detention and imprisonment against Palestinians evokes the mass incarceration of Black people in the US, including the political imprisonment of our own revolutionaries. Soldiers, police, and courts justify lethal force against us and our children who pose no imminent threat. And while the US and Israel would continue to oppress us without collaborating with each other, we have witnessed police and soldiers from the two countries train side-by-side.

US and Israeli officials and media criminalize our existence, portray violence against us as “isolated incidents,” and call our resistance “illegitimate” or “terrorism.” These narratives ignore decades and centuries of anti-Palestinian and anti-Black violence that have always been at the core of Israel and the US. We recognize the racism that characterizes Israel’s treatment of Palestinians is also directed against others in the region, including intolerance, police brutality, and violence against Israel’s African population. Israeli officials call asylum seekers from Sudan and Eritrea "infiltrators" and detain them in the desert, while the state has sterilized Ethiopian Israelis without their knowledge or consent. These issues call for unified action against anti-Blackness, white supremacy, and Zionism. 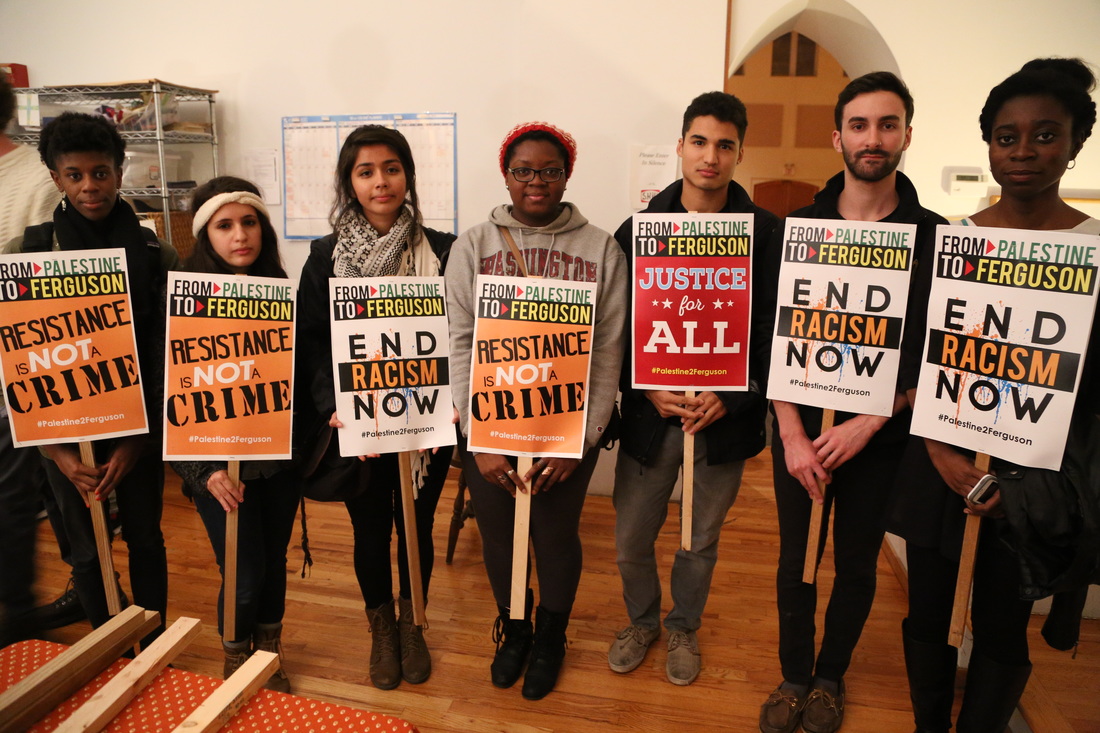 (Members of the Palestine Contingent to Ferguson October pose with signs for the weekend's events. Photos of a Palestine2Ferguson sign at the main march during Ferguson October. (Photo by Christopher Hazou))

We know Israel’s violence toward Palestinians would be impossible without the US defending Israel on the world stage and funding its violence with over $3 billion annually. We call on the US government to end economic and diplomatic aid to Israel. We wholeheartedly endorse Palestinian civil society’s 2005 call for Boycott, Divestment, and Sanctions (BDS) against Israel and call on Black and US institutions and organizations to do the same. We urge people of conscience to recognize the struggle for Palestinian liberation as a key matter of our time.

As the BDS movement grows, we offer G4S, the world’s largest private security company, as a target for further joint struggle. G4S harms thousands of Palestinian political prisoners illegally held in Israel and hundreds of Black and brown youth held in its privatized juvenile prisons in the US. The corporation profits from incarceration and deportation from the US and Palestine, to the UK, South Africa, and Australia. We reject notions of “security” that make any of our groups unsafe and insist no one is free until all of us are.

We offer this statement first and foremost to Palestinians, whose suffering does not go unnoticed and whose resistance and resilience under racism and colonialism inspires us. It is to Palestinians, as well as the Israeli and US governments, that we declare our commitment to working through cultural, economic, and political means to ensure Palestinian liberation at the same time as we work towards our own. We encourage activists to use this statement to advance solidarity with Palestine and we also pressure our own Black political figures to finally take action on this issue. As we continue these transnational conversations and interactions, we aim to sharpen our practice of joint struggle against capitalism, colonialism, imperialism, and the various racisms embedded in and around our societies."