Trump To Deport Kenyans, Including Obama? Satire Passes As News

NEW DELHI: US Presidential candidate Donald Trump has said his fair share of bizarre things, with his campaign predicated on offensive racist and sexist remarks. Amongst one of his most outlandish statements has been the suggestion that Mexicans seeking immigration to the US were “rapists.” Therefore, one can hardly blame a newspaper from Kenya for taking seriously a story from a little known satirical website that joked that Trump planned to “deport Kenyans back home and force Kenya to pay for it.”

“Donald Trump will deport all Kenyans living in the US if elected President,” read a headline in The Star. 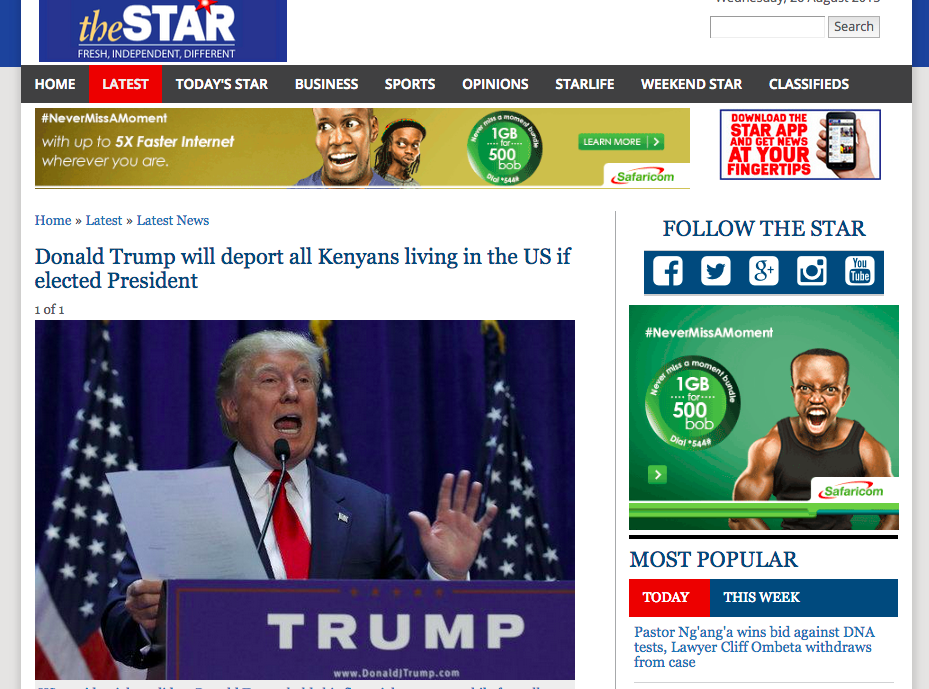 “Republican presidential hopeful Donald Trump intends to deport Kenyans living in America if elected US president. Trump, who voiced his opposition for America’s immigration policy, said the US is “the only country in the world whose immigration system puts the needs of other nations ahead of our own,”” the article reads.

Excerpts of the article read as:

“The deportation would begin with Mexicans, which will “pave the way for a general deportation of all immigrants who ever came to the United States.”

“I’ve had my eye on Kenyans for a while now. Kenyan Americans,’ as they call themselves, have been here for a while now, and there are bound to be some difficulties with the whole deportation process.”

“I promise Americans that I will make the Kenyan government pay for the deportation of every descendant of every Kenyan who today resides in the United States, regardless of how they came to be here,” Trump told Newslo.

Trump said the deportation would also include US President Barack Obama, whom he blamed for the immigration problem. “There will be no exceptions. Especially so, since the situation in which America is today is largely his fault. When he’s deported, the long road to recovery will finally be able open for us.””

The original article appeared in satirical site www.politicalo.com. The satirical article is reproduced below: 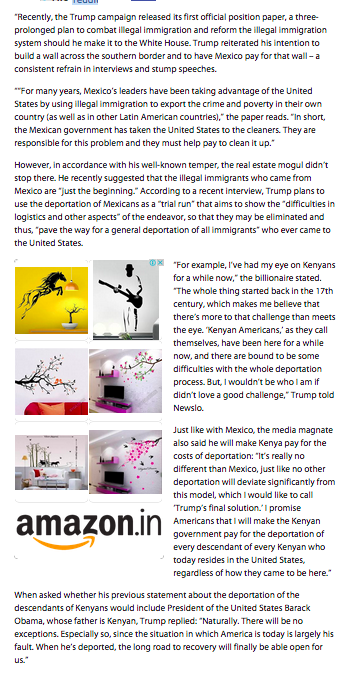 At the time of writing, The Star has corrected their article, stating “In an article by satirical website Newslo” whereas originally the article identified the source simply as Newslo. The article, however, still remains published and reads like any other news story in the paper.

This would be a major gaffe, but can we really blame The Star for believing that Trump was ready to deport Kenyans given the real estate mogul’s recent statements?