PALESTINIANS FLEE VIOLENCE IN SYRIA, THEN IN LEBANON, NOW'?

ELECTRONIC INTIFADA: Riad Najem and his family have endured a double displacement in recent years.

Having fled Palestinian refugees in Syria, during 2013, they took shelter in Lebanon’s Ein al-Hilweh camp. Last week, they were uprooted because of fighting between armed groups within that camp.

In the Musalli Mosque — just outside the camp — Najem, his wife and his four daughters have been sleeping on the floor alongside hundreds of others who fled the violence.

“We had nowhere else to go,” he said. “A lot of people came to the mosques for shelter but others had to sleep in the streets.”

Situated near the city of Sidon, Ein al-Hilweh is home to approximately 80,000 Palestinian refugees, including an estimated 10,000 who fled the ongoing civil war in Syria, according to camp officials.

The Sidon municipality — which provided shelter for more than 200 of Ein al-Hilweh’s residents over the last week — estimates that 90 percent of those who are still displaced from the camp were Palestinian refugees who had come from Syria.

The latest bout of fighting in Ein al-Hilweh — which pitted members of the Fatah party and leftist factions against various Islamist groups — broke out on 21 August and ended on last Thursday with a ceasefire.

Six people were killed in the fighting; more than 70 residents were injured and 3,000 displaced.

At all of Ein al-Hilweh’s entrances, Lebanese soldiers at checkpoints control who enters and leaves, 24 hours a day. Inside the overcrowded camp, many buildings bear the marks of fighting. Walls are covered in fire-induced soot and damaged by bullet holes, while toys, prayer mats and other personal belongings lay under mangled concrete and twisted steel.

“I don’t want to go back to my home here,” Abu Muhammad Issa, a 57-year-old father of three who also fled to Ein al-Hilweh from Syria in 2013, said. “I already lost my son when Yarmouk was bombed. I don’t want to lose any more children.”

“I want to send a message to the international community and the world: Palestinians have suffered enough,” he added. “Find a solution for us. We’ve been through more than six decades of suffering and displacement.”

Issa was referring to how 750,000 Palestinians were expelled from their homes during the Nakba, the 1948ethnic cleansing carried out by Zionist forces. Many of these refugees went to Lebanon and Syria.

Issa’s family are among the estimated 45,000 Palestinians who fled the bloodshed in Syria only to endure humiliating conditions in Lebanon’s 12 refugee camps, where unemployment rates skyrocket. For decades, Palestinians registered as refugees were banned from practicing dozens of skilled professions. Though those restrictions have been formally loosened in recent years, there are still severe limits on Palestinian refugee participation in Lebanon’s workforce.

Although the Lebanese government places these harsh measures on all Palestinian refugees in the country, those who came from Syria are particularly vulnerable. Making matters worse, UNRWA, the UN agency for Palestine refugees, recently suspended a $100 rent stipend because of a chronic shortage of funds.

There is little guarantee that fighting won’t erupt again in the near future.

Abu Ahmed Fadel, a Hamas leader in the camp, said that fighting broke out because Jund al-Sham — a Salafist group with Lebanese and Syrian fighters and which has ties to Islamist groups in Syria — attempted to kill a Fatah member two weeks ago.

Hamas and other Islamist groups, such as the Islamic Mujahedeen Movement, had been working in recent months with Fatah and leftist groups to crack down on Jund al-Sham and other armed Salafist factions in the camp.

The cooperation between Fatah and the Islamist groups had taken place through a coalition known as the Palestinian Joint Security Forces, which was formed in March this year.

Yet sources in the camp say that cooperation was interrupted following the assassination attempt on Abu Ashraf al-Armoushi, a Fatah military leader, on 22 August. The attempt took place during the funeral of another Fatah member killed during a local dispute.

It followed a series of shootings between Fatah and Jund al-Sham. In July, for example, a prominent Fatah member, Talal al-Urduni, was killed.

Fatah responded by accusing all Islamist factions in the camp, including Hamas, of complicity in the assassination, according to Jamal Khattab, leader of the Islamic Mujahadeen Movement, and other camp officials. 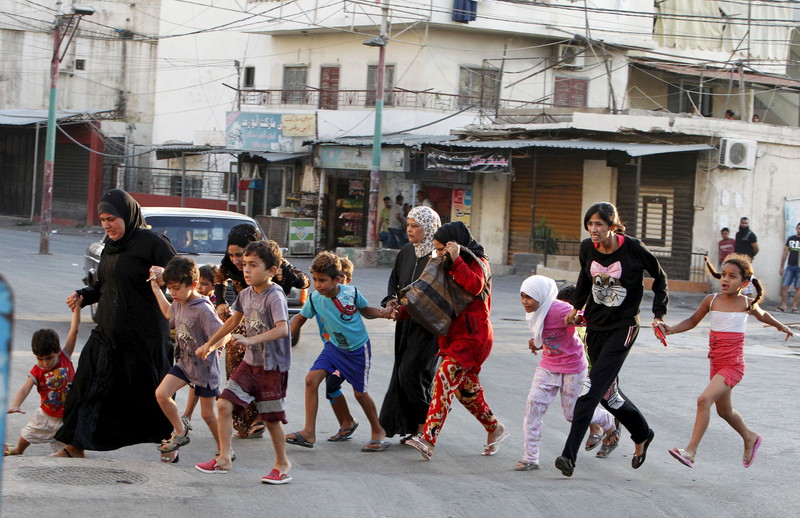 Members of Fatah and leftist organizations such as the Democratic Front for the Liberation of Palestine fought several Islamist groups in the camp, sources said. Civilians were caught in the crossfire when alleyway battles spread throughout Ein al-Hilweh.

Speaking of the ceasefire, Fadel said: “I cannot say things are resolved because the situation is still very delicate and a final solution hasn’t been reached.”

For the time being, however, the ceasefire put the Palestinian Joint Security Forces back intact. They have agreed to continue cracking down on activity by Jund al-Sham and similar groups.

Local Fatah leader Munir Maqdah, who is in charge of the Palestinian Joint Security Force in Ein al-Hilweh,estimates that Jund al-Sham controls more than one-third of the camp.

Maqdah said that local humanitarian groups have started to repair damaged buildings and homes. “There was a lot of damage in the camp,” he said.

Carrying their belongings, many residents walked past Lebanese army checkpoints back into the camp on Friday and returned to their homes. In a park across from one of the camp’s main entrances, dozens of displaced families were sitting on the grass and waiting until they could be sure the violence wouldn’t erupt again.

One displaced civilian, Abu Muhammad, whose home was destroyed during the fighting, came from the Daraa refugee camp in southern Syria with his wife and six children in early 2014.

“I don’t have the money to fix my house,” he said. “We went back to see it earlier today — it’s demolished. My wife started shaking and crying. I can’t take my children back there.”

“The floor of our house is covered in water because pipes burst and it was hit by shells,” Abu Muhammad added.

He criticized the Lebanese government for forcing Palestinians from Syria to live in the overpopulated Palestinian refugee camps in Lebanon. “It was already hard to pay the $250 a month for rent in Ein al-Hilweh, but I can’t even imagine how much we’d have to pay to live outside the camp,” he said.

Most of the stateless Palestinians who came from Syria are unable to obtain residency papers from the Lebanese authorities which would legalize their presence.

In June, as he left the camp to search for construction work, Abu Muhammad was arrested by Lebanese soldiers at a checkpoint and detained for five days before eventually being released.

“I wish I could take any nationality in the world — I don’t care which one — just to make sure my children have a future,” he said. “I worked as an engineer in Syria and provided a good life for my family. There are no jobs for us here in Lebanon.”

With the persistent threat of more violence and an unemployment level that fluctuates between 70 and 80 percent, according to camp officials, many of Ein al-Hilweh’s residents have paid thousands of dollars to take boats across the Mediterranean with the hope of being granted asylum in Europe. Many die along the way.

In the Musalli Mosque, Riad Najem hoped the fighting will not compel his children to take such desperate measures. “I looked at the sea the other day and started cursing it,” he recalled. “I said, ‘Even you? Even you have become our enemy?’”

“Haven’t we suffered enough?” Najem asked. “Our elderly should at least be allowed to step foot in Palestine once more before they die.”

Camp resident Abu Arab, who was born and raised in Ein al-Hilweh, blamed the Lebanese government for not doing more to prevent groups like Jund al-Sham from bringing their fighters into the camp. “They [Lebanese forces] have checkpoints all around the camp,” he said. “But [Jund al-Sham] have between 100 and 200 fighters. We see them all the time in the camp.”

Lebanese politicians and media alike regularly incite against Palestinians in Ein al-Hilweh for allegedly providing a safe haven to such groups. But the camp’s residents reject these claims and say they need security.

“These people are able to enter and leave the camps, but civilians [Palestinians from Syria] are being arrested for not having papers,” Abu Arab said. “Where’s the logic?”

(Patrick O. Strickland is an independent journalist and regular contributor to The Electronic Intifada).