India Confirms Death Of 20 Indians On Boats In Yemen

NEW DELHI: At least 22 people, most of them Indian, have been killed in airstrikes conducted by the Saudi-led coalition in eastern Yemen's al-Hodeidah port on Tuesday.

Vikas Swarup, the spokesperson for India’s Ministry of External Affairs, in response to a question on the death of Indian nationals in Yemen said: "We have seen media reports about the death of Indian nationals in Yemen. Indian Embassy officials in Djbouti are in touch with local contacts and we have ascertained that there were two boats one of which was plying between Berbera (Somalia) and Mokha (Yemen). The boats came under aerial bombardment in the afternoon of 8 September. The boats were carrying a total of 20 Indian crew members of which 13 are alive and 7 are reported missing. No other information is currently available regarding the identities of the Indian nationals. Embassy officials are in constant touch with local authorities and are also due to meet with the boat owner today at which point of time more information would be available.”

India doesn’t have an embassy in Yemen, as it was shut down in April following the escalation of the conflict in the country.

The strikes seemed to have been targeting fuel and arms smugglers in the area controlled by the Houthi rebels, with locals saying that that the strikes killed at least 20 Indians.

Houthi activists posted pictures of the aftermath of the incident on Twitter, stating that the victims were fishermen in two boats. 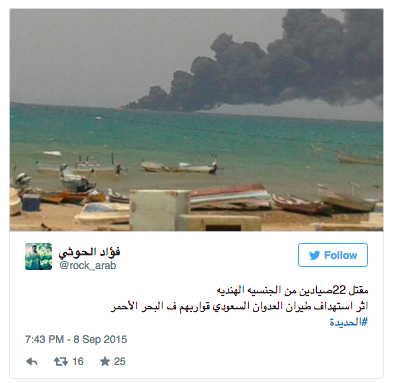 The text reads: “The killing of 22 fishermen of Indian nationality. The impact of aviation Saudi aggression targeting their boats in the Red Sea,” (as translated by Google Translate).

The news of the Indian nationals, comes as the war in Yemen intensifies, with the Saudi-led coalition increasing airstrikes targeting the Houthi rebels, who are believed to have ties with the region’s other power: Iran.

A few days ago, Qatar deployed 1000 soldiers to Yemen, joining the Saudi and Emirati troops who launched a ground offensive in the country last month, after the rebels captured the Yemen's second city Aden. This offensive has pushed the rebels out of five southern provinces, although they still control Sanaa and large parts of the north and centre.

The Saudi-led coalition has also seen casualties, with at least 50 soldiers from the Arab coalition, including 45 from the UAE and five from Bahrain, killed last week in fighting.

The situation remains tense, with Yemeni security officials and witnesses telling AP that 12 Houthi rebels were killed in the air strikes in the province of Marib, east of the capital Sanaa. Local residents told DPA that coalition strikes hit a military base held by pro-Houthi forces in Shabwa province's Beihan.

The escalation of the conflict has compounded the humanitarian crisis in Yemen, which had already worsened after the Saudi coalition began bombing the country on March 26.

According to the United Nations over 3000 people have died in the few months the fighting began. 21 million people are in desperate need for humanitarian aid. Relief workers have warned of a dire situation as civilians in Yemen remain in need of urgent medical and food supplies.