How is Saudi Arabia helping refugees?

NEW DELHI: Reports indicate that Saudi Arabia has offered to build 200 mosques in Germany, to help the growing number of people fleeing conflict in West Asia.

According to the German publication Frankfurter Allgemeine Zeitung, which quoted a report in the Lebanese newspaper Al Diyar -- Saudi Arabia will build one mosque for every 100 refugees who entered Germany in extraordinary numbers last weekend.

The gulf states have received a fair amount of criticism for failing to do enough to resettle the growing number of refugees from West Asia. As Amnesty International points out, "six Gulf countries -- Qatar, United Arab Emirates, Saudi Arabia, Kuwait, Oman and Bahrain -- have offered zero resettlement places to Syrian refugees."

This was also pointed out by Human Rights Watch executive director Kenneth Roth, who Tweeted: "Guess how many of these Syrian refugees Saudi Arabia & other Gulf states offered to take? 0"

The map below, Tweeted by Luay Al Khatteeb, a nonresident fellow at the Brookings Institution, shows the number of refugees accommodated by Syria’s neighbours in comparison to the oil rich countries a little further South. 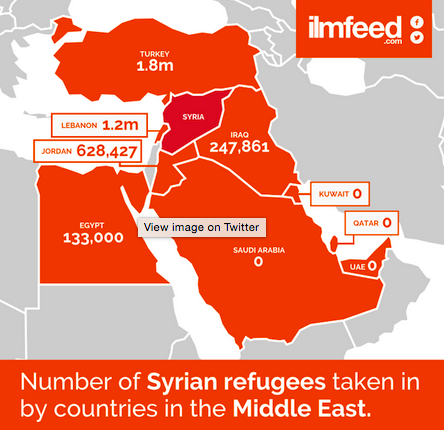 The gulf states are not signatories to the 1951 United Nations Refugee Convention -- which means they do not follow the rules and regulations that govern the rights of refugees.

And these gulf nations are probably the best positioned to accommodate refugees. Compare the average incomes for Qatar, $143,000; Kuwait, $71,000; or Saudi Arabia, $52,000 (according to International Monetary Fund figures), with that of Jordan ($11,000), which has received 630,000 refugees. Lebanon, whilst a little richer, has more than 1.2 million Syrians, making them roughly one-quarter of the total population. Turkey, which has a per capita income of $20,000 is home to 1.2 million Syrians.

The gulf nations claim that they are playing their part by providing aid for the rehabilitation of refugees. Saudi Arabia has given $18.4 million to the United Nations Syria response fund so far this year, while Kuwait has given more than $304 million -- making it the world’s third largest donor. “Burden sharing has no meaning in the Gulf, and the Saudi, Emirati and Qatari approach has been to sign a check and let everyone else deal with it,” said Sarah Leah Whitson, executive director of Human Rights Watch for its Middle East and North Africa division, as quoted in the New York Times.

It is not surprising, therefore, that people are calling for action from the oil rich Gulf States, who for the record, are not innocent bystanders -- having in varying degrees supported anti-government rebel militias in Syria. The Arabic hashtag #Welcoming_Syria's_refugees_is_a_Gulf_duty was tweeted more than 33,000 times in the past week.

The sentiment is perhaps best captured in the following cartoons: 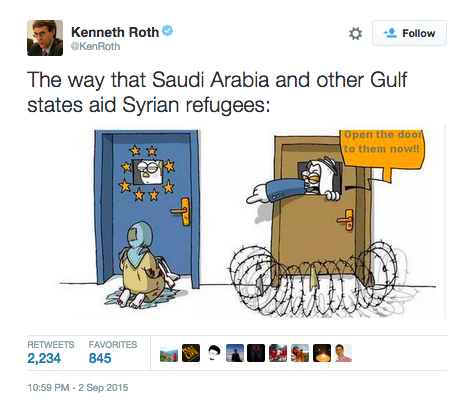 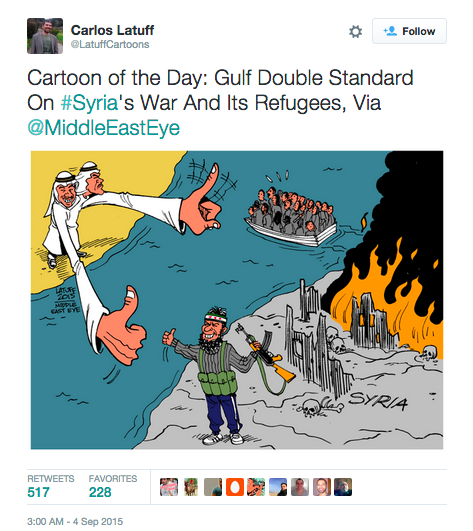 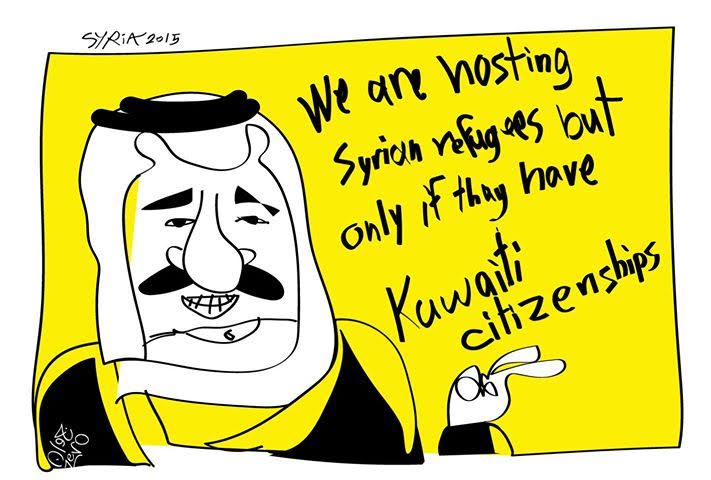