President Obama's 9/11 speech over the years

NEW DELHI: United States President Barack Obama has addressed the nation on the eve of the 9/11 terrorist attacks on six occasions. Through the years, the focus has been on remembering the victims of the attacks and reiterating the role of American values.

This year however, in the most political 9/11 speech yet, Obama outlined the US’ strategy to combat the Islamic State (IS), who have rapidly gained territory in Iraq. Obama spoke of a four step strategy to combat the militants, namely, air strikes, support to on-ground partner forces, counter terrorism efforts, and humanitarian assistance. The President added that the strategy applies to all areas where IS may be based, specifically referring to Syria.

However, the President was careful to ensure that the US’ involvement in Iraq would not be compared to its wars previously in Iraq and in Afghanistan, pandering perhaps to decreasing support amongst the American people for foreign wars.

The fact that the speech focused on the Islamic State is also in line with public interest and perceptions. This is Obama’s first speech to focus so overtly on terrorism, and that makes sense given the fact that the American people are more concerned about terrorism today than at any other point in Obama’s presidency. In fact, according to a CNN poll this week, the level of fear toward IS in the US today is comparable to perceptions of fear toward the Al-Qaeda in 2003.

The Citizen created a chart using google trends for searches relating to the Islamic State, Al Qaeda, and the umbrella term - Terrorist, between January 2009 and September 2014. 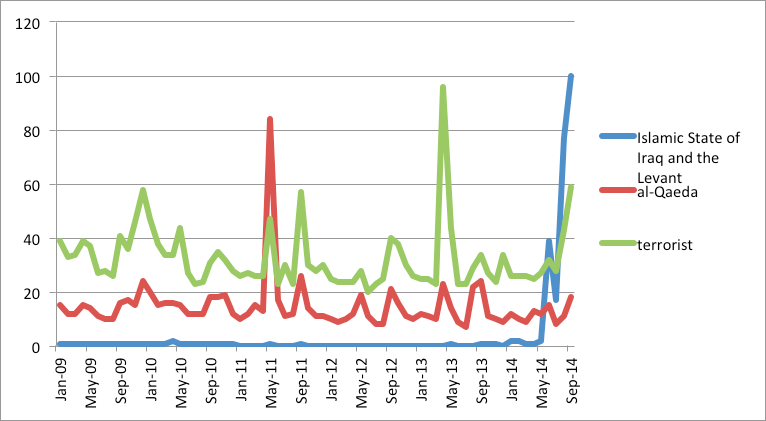 The data shows that there has been a spike in interest in the Islamic State beginning June 2014, when the group captured Mosul, and reaching an all-time high in September 2014. Prior to June 2014, there was virtually no interest amongst the American people in the IS -- despite the group having captured Fallujah in Iraq and having gained significant swathes of territory in Syria.

In his speech this year, Obama made clear that air strikes against IS militants apply to Syria in equal measure, saying, “I have made it clear that we will hunt down terrorists who threaten our country, wherever they are. That means I will not hesitate to take action against ISIL in Syria as well as Iraq.” ““In the fight against ISIL, we cannot rely on an Assad regime that terrorizes its own people -- a regime that will never regain the legitimacy it has lost. Instead, we must strengthen the opposition as the best counterweight to extremists like ISIL, while pursuing the political solution necessary to solve Syria’s crisis once and for all,” Obama added.

President Obama’s 2014 speech has thus far been his most political speech, focusing specifically on a target -- the Islamic State -- and outlining a strategy to counter it.

In addition to the 2014 speech, a look at the President’s previous 9/11 speeches reveals some interesting insights in regard to the US’ foreign policy.

In 2013, Obama spoke of the victims of 9/11, “May God bless the memory of those that we lost. May he comfort you and your families and may God bless these United States of America,” Obama concluded, after a speech that paid tribute to Americans who have lost their lives in war. “We see their legacy in the friendships they forged, the attacks they prevented, the innocent lives they saved and in their comrades in Afghanistan who are completing the mission and who by the end of next year will have helped to end this war,” Obama had said.

Interestingly, Obama’s 2013 9/11 speech came a day after a speech that highlighted the US’ role in Syria, defending the prospect of military action in response to the Syrian government’s alleged use of chemical weapons.

Similarly, in 2012, the speech was centred on the families of the victims of the 9/11 attacks. Obama also noted that during his administration Osama Bin Laden had been killed, and that the wars in Iraq and Afghanistan were coming to an end. "Today the war in Iraq is over" and by 2014 "the war in Afghanistan will be over," Obama had said, adding Al Qaeda's leadership has been devastated and Osama bin Laden will never threaten us again.”

Ironically, two years later, the President’s 2014 speech focused on a seemingly new war and a seemingly new enemy that also happened to be an Al Qaeda off-shoot, namely, the Islamic State.

In 2011, the speech focused on America’s resolve. “These past ten years underscore the bonds between all Americans. We have not succumbed to suspicion and mistrust,” Obama said. “They will know that nothing can break the will of a truly United States of America. They will remember that we have overcome slavery and Civil War; bread lines and fascism; recession and riots; Communism and, yes, terrorism. They will be reminded that we are not perfect, but our democracy is durable, and that democracy – reflecting, as it does, the imperfections of man – also gives us the opportunity to perfect our union,” the President said in a speech that focused more on the strengthening of American values over ten years since the 9/11 attacks, than on measures of foreign or domestic policy.

A year earlier, in 2010, Obama’s speech had focused on rooting out Al Qaeda, whilst highlighting the unity of the United States. “The perpetrators of this evil act didn’t simply attack America; they attacked the very idea of America itself -- all that we stand for and represent in the world. And so the highest honor we can pay those we lost, indeed our greatest weapon in this ongoing war, is to do what our adversaries fear the most -- to stay true to who we are, as Americans; to renew our sense of common purpose; to say that we define the character of our country, and we will not let the acts of some small band of murderers who slaughter the innocent and cower in caves distort who we are,” Obama had said. “Today, in Afghanistan and beyond, we have gone on the offensive and struck major blows against al Qaeda and its allies. We will do what is necessary to protect our country, and we honor all those who serve to keep us safe,” Obama said in a statement defending the US’ role in Afghanistan and Iraq.

Obama’s 2009 speech also focused on remembering the victims and on American values, and defended the US’ actions against Al Qaeda. “Let us renew our resolve against those who perpetrated this barbaric act and who plot against us still. In defense of our nation we will never waver; in pursuit of al Qaeda and its extremist allies, we will never falter,” Obama said. “This may be the greatest lesson of this day, the strongest rebuke to those who attacked us, the highest tribute to those taken from us -- that such sense of purpose need not be a fleeting moment. It can be a lasting virtue.”