Does This Israeli Hummus Cafe Have The Solution For Peace?

NEW DELHI: Jerusalem is burning. In the past month, violent confrontations have led to the death of at least 50 Palestinians and nine Israelis. Although sporadic violence is a tragic everyday reality in the region, things are particularly bad following Israeli incursions into Al Aqsa mosque, because of which protests against Israel’s occupation garnered momentum across the West Bank, including East Jerusalem, and the Gaza Strip.

An Israeli settler too died on Tuesday, hours after he was run over by a Palestinian man near Hebron.

Violent protests and confrontations continue, marking a particularly tense month in the region.

Amid the tense atmosphere, and calls for restraint -- UN Secretary General Ban Ki Moon visited the region this week in an attempt to defuse tensions -- a humus cafe in Central Israel is doing its bit to foster peace and reconciliation.

The Humus Bar at the M Mall in Kfar Vitkin is offering a 50 percent discount to Jews and Arabs who dine together at the establishment.

“Scared of Arabs? Scared of Jews? With us there are no Arabs, but also no Jews. With us there are people! And genuine excellent Arabic hummus! And Jewish, excellent praiseworthy falafel with free refill on every hummus, whether you're Arabs, Jews, Christians or Indians.

Special bargain: 50% discount on hummus to a table where Arabs and Jews sit together. 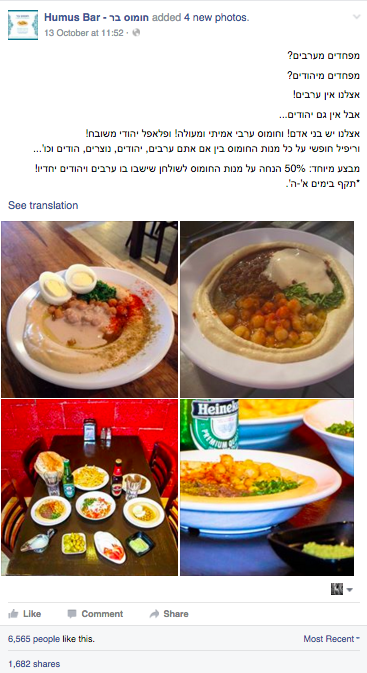 “If there's anything that can bring together these peoples, it’s hummus,” owner Kobi Tzafrir told i100.co.uk. Here’s hoping he’s even partly right.