NEW DELHI: This week, Saudi Foreign Minister Adel al-Jubeir announced that the country was severing diplomatic ties with Iran. The decision came after demonstrators in Tehran stormed the Saudi embassy in protest of Riyadh’s execution of a Shia cleric.

A day earlier, a mob attacked the Saudi embassy in Tehran and a consulate in Mashhad following the execution of Sheikh Nimr al-Nimr, a 56 year old Shia cleric who partook in the 2011 anti-government protests in eastern Saudi Arabia. 46 other people were put to death in the Sunni kingdom on the same day.

Saudi Arabia responded by saying, “Iran's history is full of negative interference and hostility in Arab issues, and it is always accompanied by destruction."

In reality, however, Iran would have the same complaint with Saudi Arabia as West Asian politics is splintered along the lines of conflict between the two countries. Two recent examples are the war in Yemen and in Syria. In Yemen, the Saudis are leading airstrikes against what are believed to be Iran-backed Houthi rebels, in a bid to protect the deposed president, Abd Rabbuh Mansur Hadi’s government. In Syria, Iran is allied with the regime of embattled President Bashar al-Assad and Saudi Arabia is part of the US-led coalition opposed to Assad.

The rivalry between the two countries is far older and more complicated. In terms of a primordial understanding, religion has played a role in the conflict, with a Sunni Saudi Arabia pitted against a Shia Iran. In this sense, the rivalry between the two countries can be linked to a 1000 year old argument at the heart of Islam -- after the death of Prophet Muhammad, his followers split over who was his rightful heir.

As with all primordial arguments, however, it is important not to overstate the religious division, as in parts of the world, where Shia-Sunni divisions do not exist, groups within each sect account for rivalry. Overall, all sects share many common beliefs and practices and Shias and Sunnis have lived together harmoniously for centuries.

The conflict between the two countries, therefore, has more to do with power dynamics in West Asia, with religion being the prism through which the political tussle is being fought. 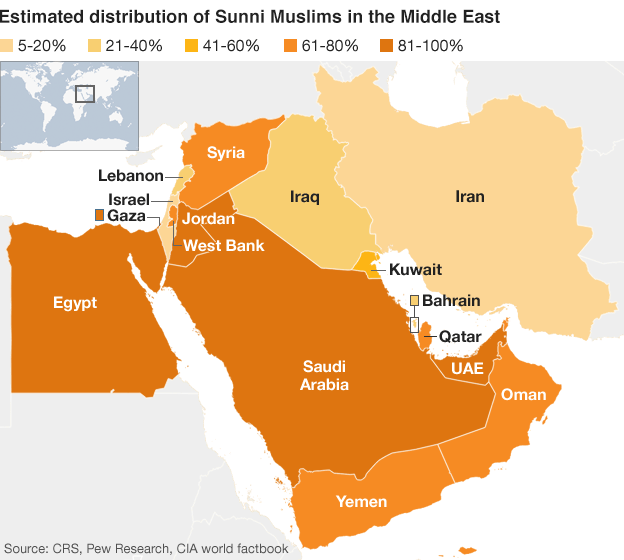 Sunnis in West Asia (via BBC): 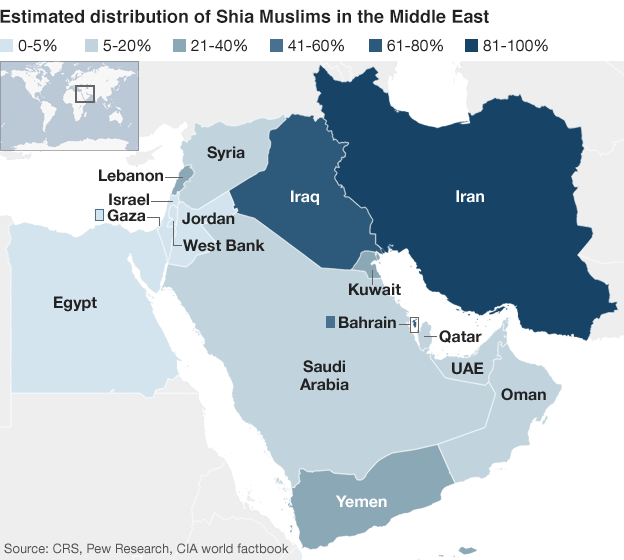 Shias in West Asia (via BBC):

The political antecedents of the current conflict are traced to the Iranian revolution of 1979, which saw a pro-Western leader toppled and Shia religious authorities taking over. As Tehran emerged as an independent regional power, it began backing Shia militias and parties abroad whilst Riyadh played up Sunni loyalties, eventuating in the formation of the Gulf Co-operation Council.

Since then, relations between the two have been strained, with pockets of better times and cooperation.

In the 1980s, tensions between Saudi Arabia and Iran escalated to almost a breaking point in July 1987 when 402 pilgrims, 275 of whom were Iranian, died during clashes in Mecca. Protesters took to the streets of Tehran, targeting the Saudi embassy and Kuwait’s embassy. A Saudi diplomat, Mousa'ad al-Ghamdi, died in the violence. Saudi Arabia suspended diplomatic ties with Iran for three years following the incident.

Also in the 1980s, tensions soared over Saudi Arabia backing Iraq's Saddam Hussein. This culminated in a milestone in 2003, as a US-backed invasion overthrew Hussein and appointed a Shia government in Baghdad.

The 2000s, however, had till that point represented better ties between Saudi Arabia and Iran, as Saudi King Fahd congratulated Iranian President Mohammad Khatami on his election victory in 2001. Khatami sought to improve relations with Saudi Arabia, visiting Riyadh in 1999 after winning his first landslide elected in 1997. The two countries signed a security pact in 2001.

In 2003, the US-led invasion of Iraq once again divided the region along sectarian lines. At this point, Saudi Arabia objected to Iran's nuclear energy programme, as President Mahmoud Ahmadinejad succeeded Khatami. Later, US diplomatic cables released by WikiLeaks showed Saudi leaders pushing Washington to take a tough stand against Tehran’s nuclear programme, including the possible use of military force. Last year’s nuclear deal with Tehran in fact heightened Saudi insecurities.

In 2011, Saudi Arabia sent troops to Bahrain to suppress mass pro-democracy protests, worried that the mostly Shiite opposition would align with Iran.

Other flashpoints have included the Iranian fury over a deadly stampede during last year's Hajj pilgrimage and an overall more assertive Saudi foreign policy since the new King took over.

The tensions, however, boil down to two key conflict -- Yemen and Syria. In 2012, Saudi Arabia became the main supporter of rebels fighting to topple Syrian President Bashar al-Assad, an ally of Iran. The civil war in Syria has displaced more than 4 million people and led to the rise of militant groups including the Islamic State, coming to represent one of the biggest crises in the modern world.

In addition to being the aggressors in Syria, Saudi Arabia began military strikes on Yemen in 2015, to beat back Houthi rebels allied with Iran from taking control. The strikes have largely targeted civilian populations, with the UN saying that Yemen represents the worst humanitarian crisis in the world today. A few weeks ago, the UN Commissioner for Human Rights, Zeid Ra'ad al-Hussein, told the UN Security Council that the Saudi-led coalition's military campaign in Yemen appeared to be responsible for a "disproportionate amount" of attacks on civilian areas.

The Saudi led coalition is backed by the US and other western powers, who have been criticised by rights groups for providing the coalition with arms, weapons and other forms of aid. The coalition’s air strikes have devastated Yemen, hitting civilian targets like weddings and hospitals with terrifying regularity.

Saudi Arabia has also imposed a blockade on Yemen, which has compounded the crisis further. The country is amongst the poorest in the world, and the blockade has led to a famine-like conditions where food is exceedingly scarce. The blockade has also prevented deliveries of fuel, which inhibits the ability of Yemenis to travel, and has also contributed to an energy crisis where electricity is intermittent at best. Healthcare is another area of emergency concern, as hospitals, medical professionals and treatment are all in short supply.

Saudi Arabia has justified the blockade on the grounds that it is preventing the Houthi rebels from acquiring new weapon.

To make matters worse, the blockade is ratified by the UN. In mid-April, less than three weeks after the Saudi-led coalition launched its military campaign, the UNSC passed a resolution largely drafted by the Gulf countries that imposed a strict arms embargo on the Houthi leadership and their allies. The council approved the resolution, with all countries voting in favour of it except for Russia, which abstained.

The resolution was passed after weeks of closed door meetings between the Gulf countries and the Russians, where the Gulf nations convinced Russia to let go of its insistence to include text mandating "humanitarian pauses" in the coalition airstrikes, saying that such pauses would allow the Houthis to regroup. The final text leaves it to UN Secretary General Ban Ki-moon “to facilitate the delivery of humanitarian assistance and evacuation, including the establishment of humanitarian pauses, as appropriate, in coordination with the Government of Yemen.”

The cost, however, is being borne by the civilians of Yemen -- being pounded by airstrikes on one side and choked by the lack of food, supplies, energy and healthcare on the other.

In this context, the execution of Sheikh Nimr becomes just a string in a long line of developments, with the severing of ties indicating an escalation of conflict in the region, as both the Yemen and Syrian conflicts need negotiations and dialogue between all parties involved.