Charlie Hebdo Does It Again

The cartoon is a reference to the New Year’s Eve attacks in Cologne, Germany. Authorities and witnesses said that on December 31, 2015, about 1000 people, mostly men, congregated at Cologne's central train station before breaking off into small groups that molested and robbed women. Investigations narrowed down to those of North African origin, with the incident becoming central to the immigration debate enveloping Europe.

Charlie Hebdo’s latest cartoon stokes tensions as it seeks to paint all refugees with the same brush, in this case, as sexual assaulters. The depiction of Aylan, a four year old Syrian refugee whose dead body washed ashore a Turkish beach last year, as one of the assaulters goes even a step further as a tool to provocate.

The cartoon shows the image of Aylan as it appeared across the media last year, face down on a Turkish beach. Alongside that depiction, is Aylan all grown up, dehumanised and chasing a woman. The caption reads: “What would little Aylan have grown up to be? An ass groper in Germany.”

The depiction has sparked off a wave of criticism, with a fair few voices on social media slamming the publication. 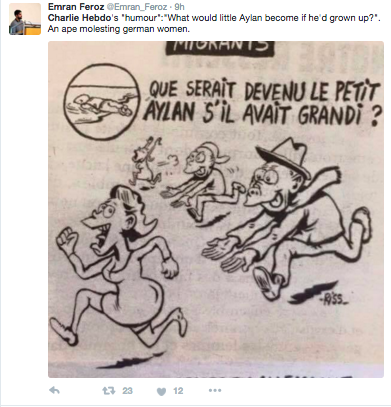 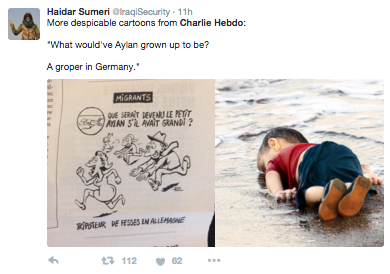 This is not the first time the publication has featured Aylan in one if its cartoons. In September last year, two cartoons published by the magazine showed Aylan’s dead body lying face down on the sand, with a McDonald’s sign reading “Two Menus Of Children For The Price Of One.” The cartoon itself was captioned: “So Close To His Goal,” effectively mocking millions of refugees who are compelled to flee circumstances of war, starvation, sexual violence -- all of which are not of their own making.

The second cartoon titled, “The Proof that Europe is Christian” depicted a drowned child next to Jesus Christ. The caption read, “Christians walk on waters… Muslims kids sink."

A brief look at the history of the publication may provide even further context. The publication has come under fire for a range of controversial cartoons, including depicting French politician and Minister of Justice Christiane Taubira as a monkey, cartoons showing the Prophet Muhammad in all sorts of compromised positions (including lying naked on a bed, being filmed from behind saying “My ass? And you love it, my ass?”) and the portrayal of the victims of Boko Haram kidnappings as welfare queens, to name just a few.

In short, the magazine’s intention is to provoke. However, that provocation is not equal in its intent. The target is very clear: France’s Muslim immigrant community. To give a crude example, imagine a publication based in the United States; this hypothetical magazine largely publishes caricatures mocking America’s African-American community, and defends its right to do as freedom of speech and expression. Would you give up your duty to criticise the publication’s politics?

In January this year, following the brutal attacks on the Charlie Hebdo offices in Paris that killed 12 people, this writer wrote an article titled: “Why I Am Not Charlie” as a response to slogan “Je Suis Charlie” that had emerged as a symbol of solidarity. The article argued that freedom of speech is bound by responsibility, and although it condemned the attack on the publication in the strongest terms, it maintained that it was erroneous to reduce the attack to a discourse centred on free speech. Amongst the din of ‘free speech’ the context was being obfuscated; the context of an impoverished Muslim minority in white-majority Europe. The article received its fair share of criticism, with the world continuing to use the #JeSuisCharlie hashtag to express their solidarity with the publication. The Citizen too expressed its solidarity, but refused to let that become equated with an approval of the marginalising politics of Charlie Hebdo.

Muslim in Europe are a marginalised minority, and rights and responsibilities have to take that into context. As an article by Asghar Bukhari in the Medium pointed out, “The Muslims today are a demonized underclass in France. A people vilified and attacked by the power structures. A poor people with little or no power and these vile cartoons made their lives worse and heightened the racist prejudice against them. Even white liberals have acted in the most prejudiced way. It was as if white people had a right to offend Muslims and Muslims had no right to be offended?”

Richard Seymour echoed a similar sentiment in Jacobin magazine, saying, ““Given the scale of the ongoing anti-Muslim backlash in France, the big and frightening anti-Muslim movements in Germany, and the constant anti-Muslim scares in the UK, and given the ideological purposes to which this atrocity will be put, it is essential to get this right. No, the offices of Charlie Hebdo should not be raided by gun-wielding murderers. No, journalists are not legitimate targets for killing. But no, we also shouldn’t line up with the inevitable statist backlash against Muslims, or the ideological charge to defend a fetishized, racialized “secularism,” or concede to the blackmail which forces us into solidarity with a racist institution.” In conclusion, this is not about free speech. It is about much, much more than that.”

The most recent cartoons are proof that freedom of speech shouldn’t be used as a ruse to obfuscate the perpetuation of a deeply unequal power structure, and when the media begins to start mocking the marginalised -- it needs to be critiqued, not defended.

The latest cartoons also come at a time when the right-wing, anti-immigration lobby is gaining popularity across Europe, with the attacks in Cologne being followed by attacks on Pakistanis and Syrians in Germany. In the first, a group of around 20 people attacked six Pakistanis, two of whom had to be treated in hospital. Separately, five people injured a Syrian man.

In 2016 Germany, support for refugees is fading fast. Protests by far-right, anti-Islam groups such as Pegida are gaining strength, and the welcoming attitude instigated by Angela Merkel last summer now seems a distant memory.

The story is the same elsewhere, with attacks on minorities having seen an increase in France, the UK and elsewhere.

In this context, all that Charlie Hebdo does is perpetuate the climate of hate, racism and anti-Islam, all obfuscated in the veneer of “free speech” -- when free speech was never absolute in the first place.