“An Open Letter to Donald Trump:

I try my hardest not to be political. I’ve refused to interview several of your fellow candidates. I didn’t want to risk any personal goodwill by appearing to take sides in a contentious election. I thought: ‘Maybe the timing is not right.’ But I realize now that there is no correct time to oppose violence and prejudice. The time is always now. Because along with millions of Americans, I’ve come to realize that opposing you is no longer a political decision. It is a moral one.

I am a journalist, Mr. Trump. And over the last two years I have conducted extensive interviews with hundreds of Muslims, chosen at random, on the streets of Iran, Iraq, and Pakistan. I’ve also interviewed hundreds of Syrian and Iraqi refugees across seven different countries. And I can confirm— the hateful one is you.

Those of us who have been paying attention will not allow you to rebrand yourself. You are not a ‘unifier.’ You are not ‘presidential.’ You are not a ‘victim’ of the very anger that you’ve joyfully enflamed for months. You are a man who has encouraged prejudice and violence in the pursuit of personal power. And though your words will no doubt change over the next few months, you will always remain who you are.

At the time of writing, the post had over 1.6 million likes on Facebook and close to a million shares. Several of the comments on the post are direct responses to Donald Trump’s state, “Islam hates us,” -- a statement that the Republican front runner made last week when speaking with the CNN’s Anderson Cooper. “There’s a tremendous hatred. We have to get to the bottom of it. There is an unbelievable hatred of us,” Trump said in response to a question on whether he thinks Islam is at war with the US. “I think Islam hates us.”

“I am a Muslim a Pakistani and I want every single person on earth to know that I do not hate you. No matter which religion you belong what your sexual preference is what color you are I do not hate you. This is not what my religion stands for. This is not what I stand for. I stand for peace equality justice and love. May peace be upon you all,” posted Xåîñåß ßütt, with over 60,000 likes on Facebook.

“This absolutely! "Because along with millions of Americans, I’ve come to realize that opposing you is no longer a political decision. It is a moral one." I'm sure I annoy my FB friends with my Trump rantings, but it's absolutely scary. As a woman, POC, immigrant, and mother to a brown boy, I am petrified of what could happen. We need to take a stand against him by not remaining silent. And as Brandon put it. It's a moral obligation!” said Janice Madrid Pérez.

“I am white. I am a man. I am from the south. I am a Christian. And I am a conservative republican....but it is still BEYOND ME how anybody is in support of Donald Trump,” said Joe Shelton III -- indicative of how polarising a figure Trump really is.

Meanwhile, Trump is seeing more and more public resistance to his campaign. The real estate mogul’s rally on Friday was cancelled after thousands showed up to protest. In Ohio a day later, a man bum-rushed the stage -- he was apprehended and arrested.

Donald Trump responded by hitting out at Bernie Sanders -- a democrat candidate -- and accusing Sanders of sending his supporters to Trump rallies.

Although Sanders didn’t respond, his supporters had the last word, as they tweeted: 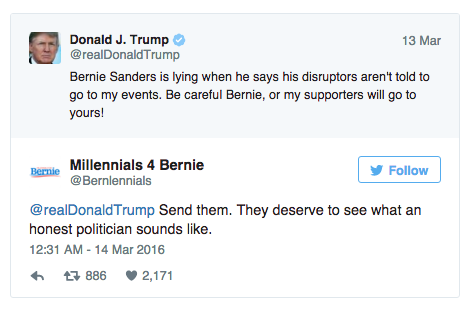 As the race for President gets tighter, with Trump clearly in the lead amongst the Republican candidates, the Democrats are seeing a surprisingly close battle between Sanders and front runner Hillary Clinton.

Last week, Sanders sent shockwaves across the political world as he bagged Michigan in the primaries -- a state that was expected to go to Clinton. Ahead of Mega Tuesday, Sanders and Clinton are neck in neck in three key midwestern states -- Missouri, Illinois and Ohio -- polls show.