NEW DELHI: More than 2000 people assembled at Tel Aviv’s Yitzhak Rabin Square, showing support and solidarity to Elor Azarya, an Israeli soldier who had been filmed shooting a Palestinian in West Bank on 24th March. The nationalist crowd raucously chanted for ‘Death to Arabs’, without any shame, guilt or fear.

The occurrence of this incident reveals how strikingly polarized the Israeli population has become. In spite of having knowledge of how Israelis are trespassing their undefined borders, crossing lines and killing hundreds of Palestinians each year as their settler colony enhances, they have no remorse. Instead, they perceive Palestinians as their enemies, who do not have the Right to Exist. This incident also states how the state-sponsored violence is now getting ratified by the public, explaining the levels to which the population has been influenced by the party in power. The organizers were neither angry with their own government nor the army as they perceive the Palestinians as their greatest threat. The chanting of ‘Death to Arabs’ reveals that the odious hatred towards the enemy is not singularly defined by the Palestinian community but instead is against the entire Arab population in general.

The activist from B’Tselem, the human rights group which had released the video footage of the Israeli soldier killing the Palestinian, had to be escorted out of the premises of the Yitzhak Rabin square to protect his life. It reveals that the population of liberals in Israel is strikingly decreasing and it is transforming into a fascist state. David Sheen, a journalist who works for Electronic Intifada, was assaulted publicly by the mob in the square and he was given the ultimatum by the police to leave the premises immediately. The crowd even started shouting at Sheen, roaring “Are you B’Tselem? Go to Gaza!” Sheen has witnessed violence and had been threatened before too in different rallies but this assemblage turned out to be the most violent. 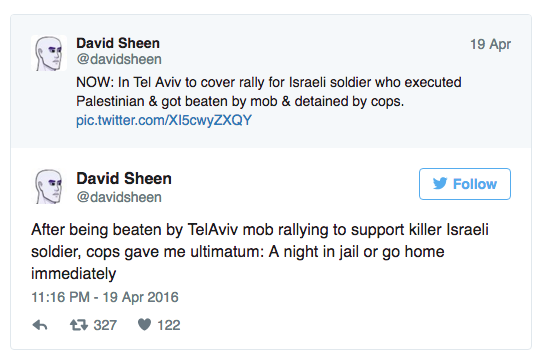 Sheen told The Electronic Intifada he arrived at Rabin Square before the rally began but as several hundred people had already gathered. Some asked him to film them with their signs supporting Azarya.

At that point, Sheen said, a man began asking him why he was filming. Other members of the crowd quickly began joining in, shouting at Sheen, “Are you B’Tselem? Go to Gaza!”

Sheen said he tried to remain calm and exit the square but the increasingly agitated mob followed him and began to surround and kick him.

He was then grabbed by a police officer and extracted. Sheen said police took his camera equipment and questioned him. After he told them he was a journalist, they said he either had to leave immediately or face a night in jail. Sheen said he chose to leave and that police returned his equipment.

The police were effectively acting accomplices to the mob, Sheen observed, ensuring the removal of journalists who could document what occurred.

Sheen said that the assault was frightening, “because I knew that everyone else at that rally was of the same mindset and there wasn’t anyone who was going to step in, so it very easily could have gotten much worse and there wouldn’t have been anybody to fish me out.” He said he had been threatened at other recent rallies he has covered, but had not experienced that level of violence.

“It doesn’t surprise me that people in Israel harbor hatred towards journalists,” Sheen said. “They don’t see the soldier’s actions as a problem,” he added. “They see the problem as exposure to world media that puts pressure on their government to withdraw support from that soldier.” “But it still caught me by surprise how quickly people were whipped up into a frothing at the mouth mob,” he said.

A video of the mob assault on Sheen was posted on Facebook by a user who accuses him of being a B’Tselem videographer intent on “provoking” the rally-goers. Sheen is not affiliated with the human rights group.


The crowd also chanted “Kill the leftists” as well as “Elor Azarya is a hero, bring back our boy!” The gathering seemed as it was the celebration of murder and an atrocious insult to human rights. Some of the posters had “We have no doubt that the Israeli army is the strongest in the world”, written over them. The narrative has been created in such a way that the executed Palestinian is being seen as an enemy who should have been murdered for self-defense. Till now, there is no evidence that he was carrying any arms or ammunition. Definitely it is a traumatic message for the Palestinians and Arabs in general, who are still trying to cope with their losses and undignified living. It is also a message to the entire world that Israel has one of the worst human rights records and in spite of it, no human rights commission or international criminal court is trying to bring out justice.

(With input from Electronic Intifada)