Speaking at the ceremony at Southwark Cathedral on Saturday, Khan called London the "greatest in the world" and added that he was "proud" and "deeply humbled" by his win. "I want every single Londoner to get the opportunities that the city gave to me and my family...the opportunities not just to survive, but to thrive,” said Khan -- the son of Pakistani immigrants to the UK.

Khan defeated Goldsmith by 44 to 35 percent of the first preference votes, going on to secure enough second preference votes to cross the 50 percent mark, with 57 to Goldsmith’s 43 overall.

The election itself was pitched and often bitter, with the Conservative party being accused of leading an “Islamophobic” and “racist” campaign targeting Khan. For instance, Goldsmith circulated pamphlets branding Khan “radical and divisive” -- words that take on a specific connotation when linked to Khan’s muslim identity.

“The word “radical” is a capacious one; it has many different meanings, which are context dependent. But describing a Muslim candidate in this way lies dangerously close to dubbing them as “radicalised” or a branding them an “extremist” - words that are, in contemporary society, almost exclusively associated with so-called Islamic terrorists. These words are not the same, but in the public’s minds they are very probably linked,” wrote Maya Goodfellow at the time in an article published by The Independent.

The rhetoric prompted the outgoing Conservative deputy mayor, Roger Evans, to call Goldsmith’s campaign “foolish” for leaving a “negative legacy” for the capital’s Tory party to clean up.

Roger Evans told BuzzFeed News he feared the Tory mayoral candidate’s campaign, which repeatedly attacked Labour’s Sadiq Khan for having alleged links to Islamist extremists, had undone years of work to build the Conservative vote in the capital, especially among ethnic minority voters.

“I’m concerned that the campaign we’ve run is going to leave a negative legacy which we in London are going to have to clear up long after the the people who ran Zac Goldsmith’s campaign have gone on their way,” Evans said. “We’re going to have to do quite a lot of work to re-establish trust with a lot of communities in London, that’s a shame and an opportunity missed.”

Khan too hit out at the Tories’ campaign, accusing Goldsmith and British Prime Minister David Cameron of trying to turn different ethnic communities against each other to stop him winning in the capital. Writing in The Observer, Khan said, the prime minister and Goldsmith deployed tactics “straight out of the Donald Trump playbook” -- a straight reference to the anti-Muslim rhetoric of the US presidential candidate and real estate mogul.

Although the Tories’ hateful campaign did not work in the end, the social media reaction to Khan’s win is indicative of the fault lines exposed by it. As it became clear that Khan would emerge the winner, several people congratulated the Labour candidate. Others, however, criticised the result as seeming Islamisation of the West.

The majority of tweets however, were in celebration of Khan’s victory. More important than the comments on social media this time is the fact that Khan won the biggest personal mandate in the history of British politics, with a landslide 1,310,143 votes. 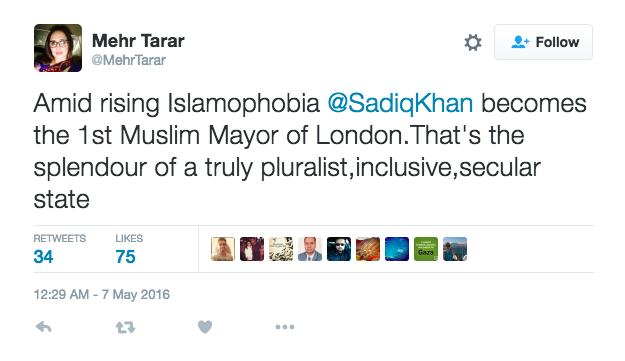