NEW DELHI: The head of Egypt’s State Information Service, Salah Abdel Sadek, believes he has the answer behind questions pertaining to the rise of violent extremism in West Asia. According to Sadek, it’s cartoon duo Tom and Jerry who are at fault.

During an address at Cairo University, Sadek blamed the classic cartoon’s for facilitating extremist behavior by creating the impression that violence is natural. “It portrays the violence in a funny manner and sends the message that, yes, I can hit him…and I can blow him up with explosives,” he said.

After Sadek’s statement, privately-owned Youm7 published an article titled “Five Accusations Tom and Jerry Faces in Egypt”. The article blames the cartoon in reference to the following points: “Children convey negative habits such as smoking and drinking alcohol;” “it teaches children stealing is normal;” “It distorts the concept of justice and supports the mouse is always unjust;” “it helps children invent sinister plans;” “it promotes the use of sharp objects and violence.” 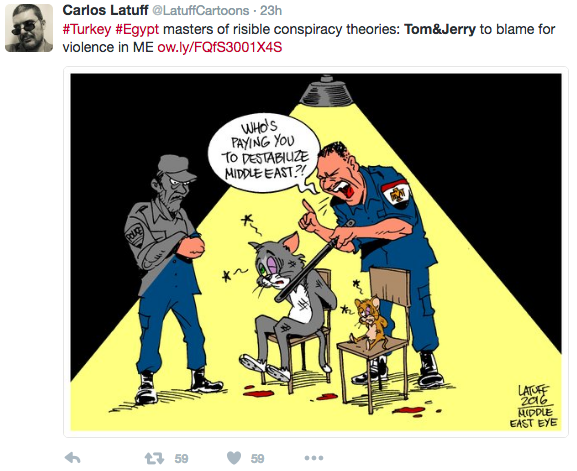 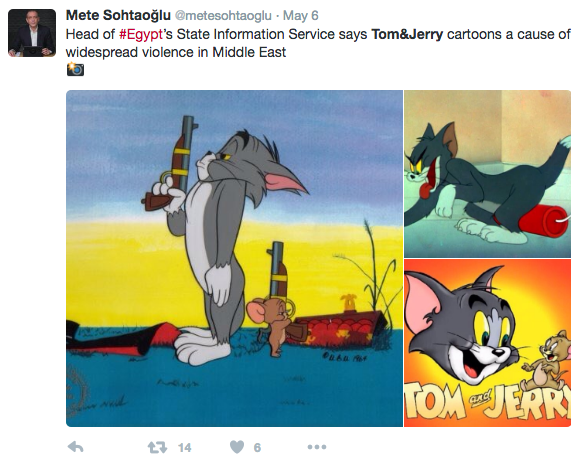 Although the official’s comments have received a lot of flak, violence depicted in film, TV and video games has been linked to the surge in violence in real life. For instance, in 2012, the NRA (National Rifle Association) blamed violent video games for mass shootings in the US."There exists in this country a callous, corrupt and corrupting shadow industry that sells, and sows, violence against its own people — through vicious, violent video games with names like 'Bulletstorm,' 'Grand Theft Auto,' 'Mortal Kombat' and 'Splatterhouse,' " NRA Executive Vice President Wayne LaPierre said at the time. LaPierre went on to also assign blame for mass shootings to music videos that "portray murder as a way of life" and to "blood-soaked films" such as "Natural Born Killers" and "American Psycho."

This link is also corroborated by psychologists and the medical community, although research has produced differing results. A recent study by the American Psychological Association concluded that playing violent video games can be linked to increased aggression in players. However, it said that there was insufficient evidence about whether the link actually extends to criminal violence or delinquent behavior.

“The research demonstrates a consistent relation between violent video game use and increases in aggressive behavior, aggressive cognitions and aggressive affect, and decreases in prosocial behavior, empathy and sensitivity to aggression,” the report said. “Scientists have investigated the use of violent video games for more than two decades but to date, there is very limited research addressing whether violent video games cause people to commit acts of criminal violence,” said Mark Appelbaum, PhD, task force chair. “However, the link between violence in video games and increased aggression in players is one of the most studied and best established in the field.” “No single risk factor consistently leads a person to act aggressively or violently,” the report states. “Rather, it is the accumulation of risk factors that tends to lead to aggressive or violent behavior. The research reviewed here demonstrates that violent video game use is one such risk factor.”

Despite what the research said, the Egyptian official’s most recent comments were the butt of several social media jokes.