“Reebok would like to distance itself from the shoe,” the US-headquartered company told The Electronic Intifada in an emailed statement on Tuesday. “The shoe was a one-off initiative from one of our consumers. We do not support this initiative.”

Reebok, which is owned by Germany’s Adidas Group, added that its Israel distributor “has withdrawn its plans to auction off this shoe.”

Palestinians are welcoming the move.

“Reebok has distanced itself from this terribly offensive initiative after recognizing the reputational and financial price a BDS campaign against it would have cost it as a result,” Abdulrahman Abunahel, Gaza Coordinator of the Palestinian BDS National Committee (BNC), told The Electronic Intifada.

“Companies as large as Veolia, Orange, CRH and others have ended their involvement in Israel’s serious violations of international law after intense boycott, divestment and sanctions campaigns, triggering a domino effect that many other companies are taking to heart,” Abunahel added.

On Monday, social media users reacted with outrage after The Electronic Intifada reported on the plans to release the sneaker with “Israel 68” emblazoned on the heel and auction it through Reebok Israel’s Facebook page.

Many called for boycotts of the company’s products. The news was also disseminated by groups campaigning for Palestinian rights. 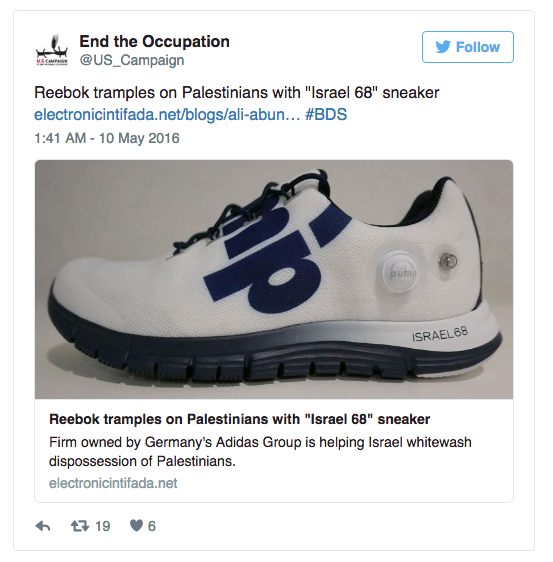 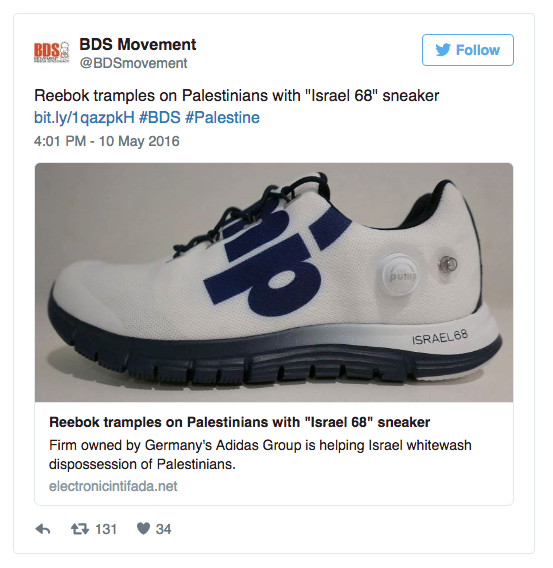 Reebok Israel had told The Jerusalem Post that “these sneakers were to be a one-time celebratory release as a collector’s item in Israel and the world.” But the shoe would have sent a clear message of contempt and disregard to Palestinians over Israel’s historic and ongoing ethnic cleansing, occupation and other violations of their rights.

“Reebok has offended Palestinians and particularly millions of Palestinian refugees who were ethnically cleansed by Zionist militias and later Israel during the 1948 Nakba and are still being denied by Israel’s apartheid their right to return home,” the BNC’s Abdulrahman Abunahel explained.

“Celebrating the destruction of Palestinian society and the uprooting of the majority of the indigenous Palestinian people, as Reebok has done, must be among the most unethical, insensitive and irresponsible acts of complicity any corporation can do,” Abunahel added.

“International corporations should understand that people of conscience around the world will hold them accountable for similar offenses,” Abunahel said.