Is Venezuela On The Path Of Zimbabwe?

NEW DELHI: Venezuela continues to grapple with an economic crisis, with analysts stating that the country is on the verge of an economic collapse. Its gold reserves have plunged to their lowest level on record after it sold $1.7 billion in gold in the first quarter of the year to repay debts. In fact, according to IMF data, Venezuela’s gold reserves have dropped almost a third over the past year and it sold over 40 tonnes in February and March. The situation is particularly troubling as gold makes up almost 70 percent of the country’s total reserves, which fell to a low of $12.1 billion last week.

Painting a troubling picture, the IMF projects that the economy will shrink 8 percent this year, and 4.5 percent in 2017, following a 5.7 percent contraction in 2015. Inflation is forecast to exceed 1,642 percent next year, fueled by printing money to fund a fiscal deficit estimated at about 20 percent of gross domestic product.

The gravity of the crisis prompted Venezuelan President Nicholas Maduro to declare a 'State Emergency' for 60 days on May 13, accusing the US government of trying to expel his government. Maduro said his emergency declaration aimed "to tend to our country and, more importantly, to prepare to denounce, neutralize and overcome the external and foreign aggressions against our country." Earlier too, in January 2016, Maduro had declared an ‘Economic Emergency’ to tackle the country's economic crisis. Venezuela had also not published its statistical data for almost one year.

Venezuelan people wanted radical changes in the functioning of the Government. In December 2015, voters anger pushed for mid-term elections, wherein the opposition (Democratic Unity) took about 65% seats in National Assembly for the first time since the Socialist Government led by late President Hugo Chavez 17 years ago. In January, the opposition took control of congress, over Socialist Maduro’s Government, which is why, it is anticipated that new reforms may be passed with ease.

But, it was blamed by the opposition that Mudaro was avoiding opposition in Assembly by the passage of State Emergencies, and called it unconstitutional. However, Supreme Court on 20 May ruled it as constitutional and justified that "the extraordinary social, economic, political, natural and ecological circumstances are gravely affecting the national economy". Opposition is trying it's best to move a referendum to remove Maduro from Presidency. Political instability is never good for any type of economy.

Three major reasons Maduro’s government is facing crisis and protests from public are high inflation, high insecurity and shortage of basic commodities and amenities. There is high number of crimes especially homicides in Venezuela, leading to insecurity within the State. The inflation was hovering around 100% last year. There is a shortage of basic goods like milk, eggs and medicines. Venezuela is also facing the outbreak of Zika virus. Energy crisis is also seen, due to droughts and about 75% of Venezuelan electricity is hydroelectricity.

This resulted in the economic downfall of the country. The GDP decreased by 5.7 % and the inflation hit 140 % last year.

Such inflation figures are not new to Venezuela. A similar situation was observed by this oil rich country when the oil prices collapsed in 1980s. The inflation levels had increased drastically in 1989 when riots where held against the government for cut down in spending towards public programmes and for opening the markets. As the liberal policies were adopted, most of the bank which were liberalized failed and they had to be bailed out by the Government. This led to inflation to approx 100% again in 1996.

Then, was Hugo Chavez elected as President. He opted socialistic policies unlike his predecessors. Also, the oil prices soared which led to his populism. He ruled till 2013 until he succumbed to cancer. Maduro was his hand-picked successor.

Maduro’s government carried forward the same philosophy of Hugo Chavez, by investing its high oil revenues into social schemes of the country.

In 2013, the oil economy, which Venezuela was completely dependent on, has found substitutes into Shale gas and renewable sources. Also, the oil prices had fallen to its low about $30 per barrel. This had hit the Venezuelan Economy completely.

Is Venezuela heading towards the path of Zimbabwe?

The oil revenues, which are 95% of Venezuelan foreign exchange earnings, reduced during 2015. This hurt the foreign exchange reserves of Venezuela. Also the fall in the price of Gold in 2015, also declined its reserves. Depleted reserves lead to currency depreciation and consequently inflation. The Venezuelan Bolivar had depreciated to less than a penny on the black-market exchange.

To combat this, Venezuela resorted to printing new bills and more money. The similar kind of response was seen by Zimbabwe in early 2000's. As seen in the graph, this lead to further inflation and had peaked during 2008. In 2009, Zimbabwe stopped printing its currency. Due to the hyperinflation, 1 US dollar was equivalent to 35 Quadrillion (i.e. 10^15) Zimbabwean dollars. 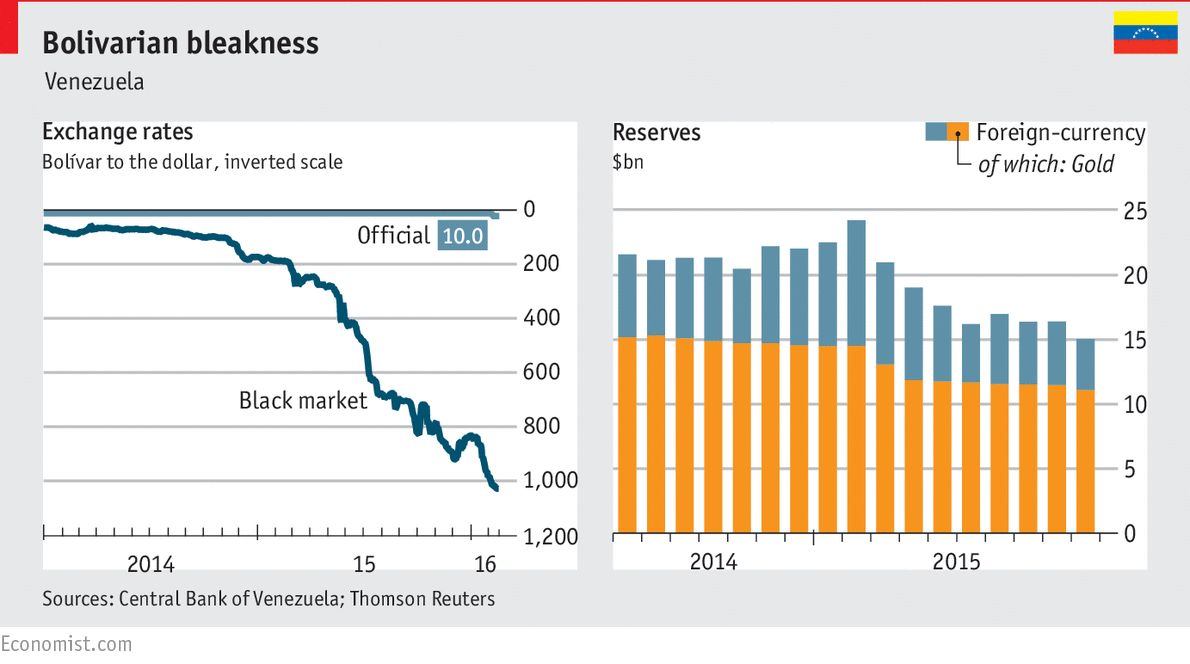 Both the countries are politically influenced by revolutionary Leaders, Venezuala under Hugo Chavez and Zimbabwe under Robert Mugabe. Mugabe is the president of Zimbabwe since 198o. During the crisis, he had seized the major companies in Zimbabwe without any compensation. Similarly, Maduro in Venezuela had evacuated the factories within the industrial area for low costing housing and in May 2016, he had threatened to seize closed factories, after Venezuela's largest Food and Beverage Company, halted production of beer, blaming government mismanagement for stopping it importing barley.

Mugabe in the early 2000 had fixed the prices of basic products at subsidised rates for the poor. Such products were stolen and later sold in black markets leading to inflation. Also, the supply demand mismatch due to shortages of basic food. Socialist country Venezuela is also seeing the same scenario of black markets and shortages.

Mugabe had blamed the speculators and betrayers for the economic crisis of his country. Similarly, Maduro had blamed the Venezuelan capitalists and US allies who are trying to expel his government.

Both the countries, have seen abrupt inflation. In early 2000's, Zimbabwe's inflation started increasing and had peaked thrice, and each time the government had redenominated the Zimbabwean Currency, the inflation decreased. Similarly, the curve of Venezuelan inflation shows a trend of increase during 2015. They can be related. If the two curves are superimposed, inflation of Zimbabwe during 2002 and inflation of Venezuela during 2015, there is a similar trend.

Both the countries have seen currency depreciation, inflation, shortage of basic supplies and utilities, increase in crime rates and adamant governments with weak economic policies.

Definitely, not taking the course as Zimbabwe of printing new bills and money shall help Venezuela avoid denomination of currency in future. The government also has to cut down its spending on social schemes and should provide more flexibility to industries. This gives another reason for capitalists to pick on socialist reforms and their failures. However, Venezuela has to take rigorous economic reforms to steer its woes away.