Global Violence Is At An All Time High

NEW DELHI: The world, according to a new report, is historically less peaceful and increasingly unequal. The 2016 Global Peace Index (GPI) shows the world became less peaceful in the last year, reinforcing the underlying trend of declining peace over the last decade. Results also show a growing global inequality in peace, with the most peaceful countries continuing to improve while the least peaceful are falling into greater violence and conflict.

The report shows that amidst the global deterioration the world continues to spend enormous resources on creating and containing violence but very little on peace. The key to reversing the decline in peace is through building Positive Peace - a holistic framework of the key attitudes, institutions and structures which build peace in the long term. The UN’s Sustainable Development Goal 16, which focuses on peace, justice and strong institutions is critical to focusing the international community on the goal of attaining a more peaceful world. But measuring it and developing the data to know if countries are improving is a serious challenge that needs greater investment and levels of cooperation.

According to the report, the last decade has seen a historic decline in world peace. This interrupts the long term improvements in peace since World War II.

The historic ten-year deterioration in peace has largely been driven by the intensifying conflicts in the MENA region. Terrorism is also at an all-time high, battle deaths from conflict are at a 25 year high, and the number of refugees and displaced people are at a level not seen in sixty years. Notably, the sources for these three dynamics are intertwined and driven by a small number of countries, demonstrating the global repercussions of breakdowns in peacefulness. Over the past decade, the average country score deteriorated by 2.44 per cent with 77 countries improving while 85 countries deteriorated, highlighting the global complexities of peace and its uneven distribution.

While many of the least peaceful countries have seen an intensification of conflict and violence over the past ten years, many of the most peaceful countries have remained peaceful or improved and are likely the most peaceful in human history. The bottom 20 countries especially have progressively become much less peaceful, creating increased levels of inequality in global peace. The past decade has seen a continuation of longer term trends in peacefulness away from external conflicts between states and towards internal conflicts within states. Although it is too early to state whether the decrease in peacefulness represents a reversal of the ‘long peace’ that started at the end of World War II, there are a number of worrying signs that suggest conflict could escalate.

The terrorism impact indicator had the greatest overall deterioration, with all but two regions recording an increase over the past decade. While still accounting for a small percentage of the total number of violent deaths, terrorism has grown steadily over the past decade. The number of yearly incidents has almost tripled since 2011 and the number of deaths has increased to over 30,000.

The majority of terrorist activity is highly concentrated in five countries: Iraq, Nigeria, Afghanistan, Pakistan and Syria. Between them these countries accounted for 78 per cent of deaths from terrorism in 2014. However, there are signs that terrorism is becoming more common across the globe, with almost every region having an increase in its terrorism impact score from 2008 to 2016. 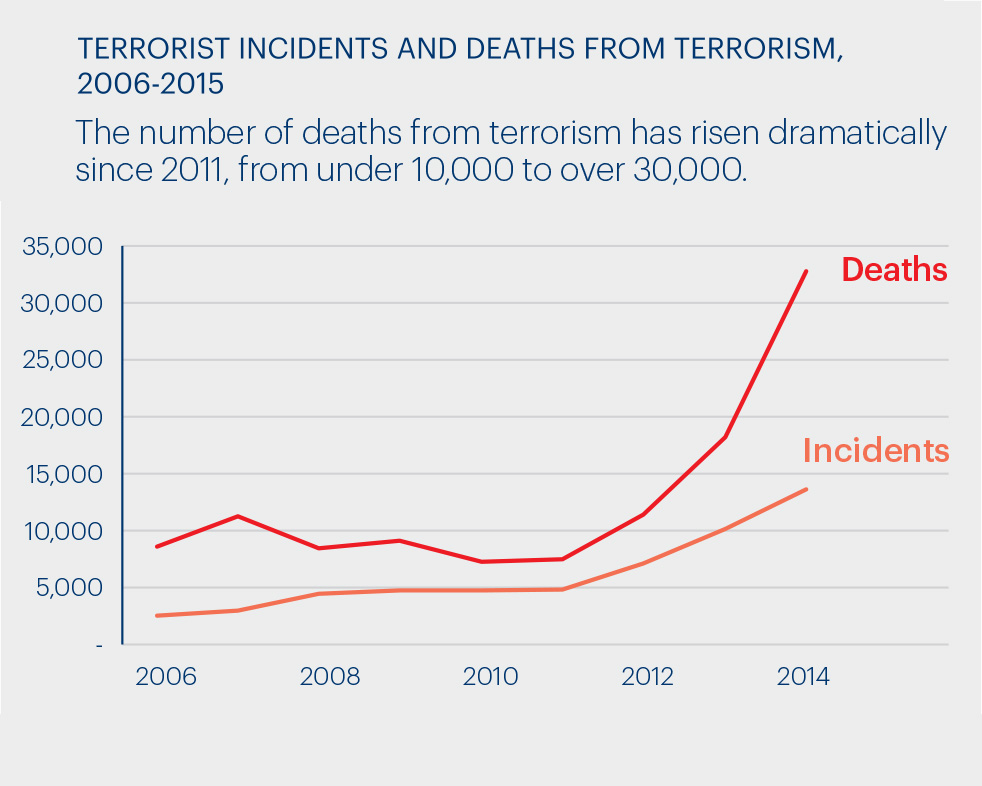 The total number of conflicts has jumped sharply in recent years, rising from 31 in 2010 to 40 in 2014. This increase in the number of internal conflicts has led to a concurrent rise in battle deaths. In 2014, owing largely to the conflict in Syria but also the increasingly protracted conflict in Yemen, battle deaths hit a 25 year high. This number is likely to increase when 2015 data is released.

Although the majority of deaths in 2014 occurred in Syria, there were a number of other conflicts that resulted in high numbers of battle deaths. In total, 11 conflicts resulted in more than a thousand deaths each in 2014, with conflict in Iraq and Afghanistan resulting in more than 10,000 deaths each. 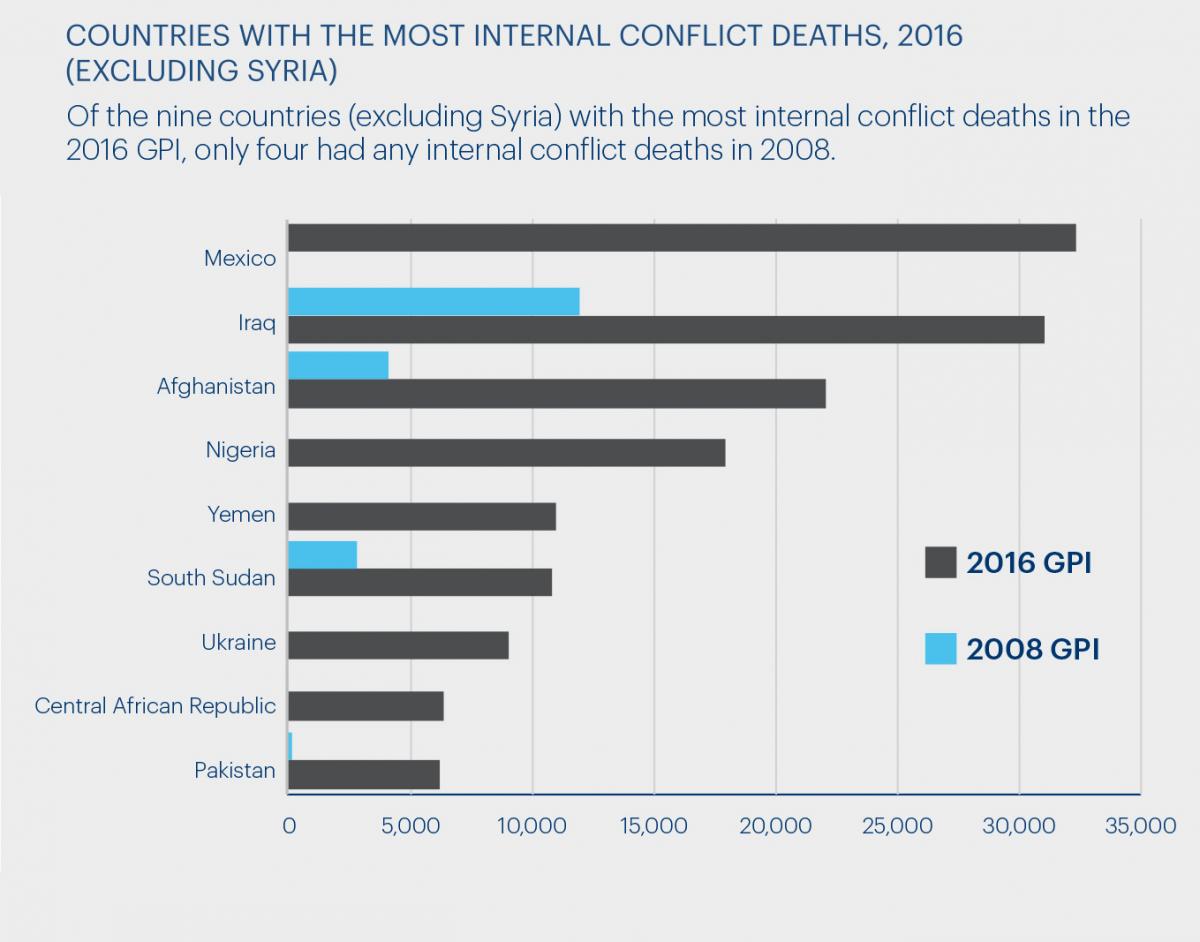 However, it is important to place today’s violence in historical context.

The world continues to spend enormous amounts on creating and containing violence and little on building peace. The economic impact of violence on the global economy in 2015 was $13.6 trillion in purchasing power parity (PPP) terms. This figure represents 13.3 per cent of the world’s economic activity (gross world product) or $1,876 for every person in the world. To put this in perspective, it is approximately 11 times the size of global foreign direct investment.

The economic analysis highlights how the economic losses from conflict dwarf the expenditures and investments in peacebuilding and peacekeeping. Peacebuilding and peacekeeping expenditures represent only two per cent of the global economic losses from conflict. This shows that our investments in peace are small and there is an enormous economic payoff to investing in peace and preventing conflict and violence. 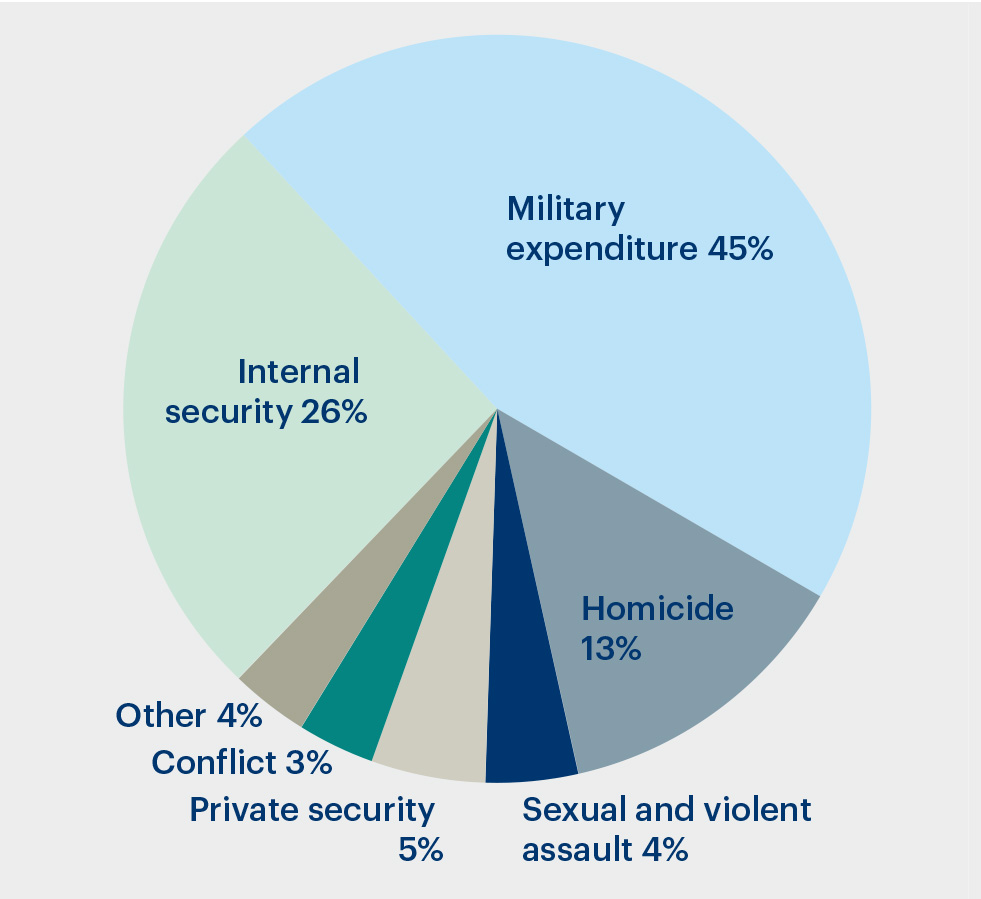 Many of the challenges facing humanity are fundamentally global in nature, such as climate change, decreasing biodiversity, continued economic instability and increasing migration. All of these challenges are interconnected and multifaceted, requiring new ways of conceptualising the relations between countries and the larger systems upon which humanity depends.

The study of what creates peace can be advanced through the concept of Positive Peace, which represents “the attitudes, institutions and structures which sustain peace”. At the heart of the research of the GPI is the goal to understand what creates Positive Peace. But understanding why some countries are peaceful and others are not, is profoundly complex. In order to understand the complexity of peace, this year’s report presents systems thinking as it has developed in biology and ecology and applies it to the study of peace.